George Takei Reminds Us That AMC's "The Terror: Infamy" Is a Timely Tale 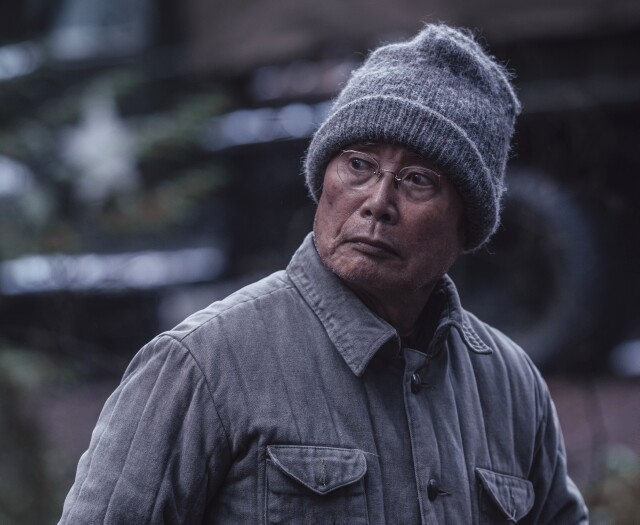 The scariest part of The Terror: Infamy  is its truth.  The second season of AMC's supernatural anthology series, weaving horror with history, hits hard because it is painfully timely.  Premiering Monday, Aug. 12, the show reminds us what happens when xenophobia triumphs.  Set during World War II, it doesn’t hold back in its depiction of the treatment of Japanese Americans interned on FDR's executive order after the attack on Pearl Harbor.  Some of Infamy was shot in the actual horse stables where families were forced to live.  Among those people was five-year-old George Takei, who plays an elder on the series and is a consultant on the 10-episode show.

Takei's involvement began when a neighbor, whom he didn't know, approached.  Alexander Woo, co-creator, executive producer and showrunner, wanted to chat about the internment.  In addition to having endured two internment camps, Takei (pictured at top) has also studied as much as he could about this hideous chapter of history.

"This is a subject very close to me," Takei told MediaVillage.  "I have written about the internment, gone on national speaking tours and to use a television series would be fantastic. And so, I came on board as a consultant.  Alex said, ‘You are an actor.  Would you like to act?'  Well, yes, I am an actor, and he developed a character for me."

The characters speak Japanese, and Takei even learned a new dialect for this project.  That sort of authenticity was crucial for Woo, who was delighted to have 10 hours to tell this story.  It's one many Americans do not know.

"I can understand there is a great deal of shame, but it is also something we need to confront," Woo said.  "There have been feature films about the internment.  The drawback is [a movie] is a single experience and you can wash your hands of it after you are done.  As anyone [who was] watching Game of Thrones knows, a television show is something [that allows you to] have a relationship with its characters over a long period of time."

Infamyintroduces viewers to a vast cast of characters, including ghosts.  It opens with a woman, wearing a kimono, getting ready for the day, putting on makeup, fixing her hair.  She looks at a family photo, then commits suicide in a most unusual way.  We realize pretty soon she is not of this dimension.  Japanese ghost stories, or Kaidon, were the perfect vehicle for this story, Woo said.

Scaring viewers while telling this chilling story was not an easy balance to achieve.  This series had to mesh imaginary horrors with real-life terrors from the not-so-distant past.

"What was challenging and yet at the same time felt like an opportunity was to tell the really important the story of the internment camps that I don't think has ever been dramatized with this kind of scope," David Madden, AMC's president of programming, said.  "Dramatizing it felt like a genuine opportunity and something that was really important to do respectfully and sensitively."

Madden praised Woo's approach and dedication to history.  As all involved and viewers will soon see, the tropes of today's rampant racism are all too obvious, and profoundly disturbing.

"The parallels are pretty stark and apparent," Woo said.  "We met with so many people who lived through the internment.  To them, one of the great tragedies of that experience is it seems to have been forgotten."

Takei is acutely aware of how Executive Order 9066 from 77 years ago destroyed generations of families when 120,000 Japanese Americans were taken from their homes to 10 internment camps.  At 82, he is among a dwindling population of those who can recall those days first-hand.

He intends to ensure that people are made aware of this horror, and what happens when hatred and suspicion fuel public policy and law.  Takei, who shot to fame on the original Star Trek, even mounted a Broadway musical about the Japanese American internment, titled Allegiance.  "It is an echo of what happened to us, this sweeping characterization of a whole people as a potential threat to our national security," Takei noted of today's toxic political environment. "When Trump was campaigning for the Republican nomination, we were doing Allegiance on Broadway, and I knew he did not know about the internment, having done Celebrity Apprentice(2012).  I had lunch with him at that time.  We discussed marriage equality for LGBT people.  I sent him a personal invitation (to Allegiance).  He never responded.  I made that invitation very public, as well.  We put a great big sign on an aisle seat in the orchestra that said: ‘This seat is reserved for Donald Trump.’ People would go down with phones and take selfies and post them."

Although Takei clearly knows how to lighten the mood and have fun -- he was delighted that Woo wrote a line in The Terror: Infamy, where his character, Yamato-San, says Takei’s signature line, "Oh, my."  Still, he never loses sight of the gravity of this series and of his commitment to remind people not to repeat the crimes of the past.

"This is the United States of America, with those shining noble ideals of American democracy," Takei said.  "And, we have been reduced to this disgrace and inhumanity."