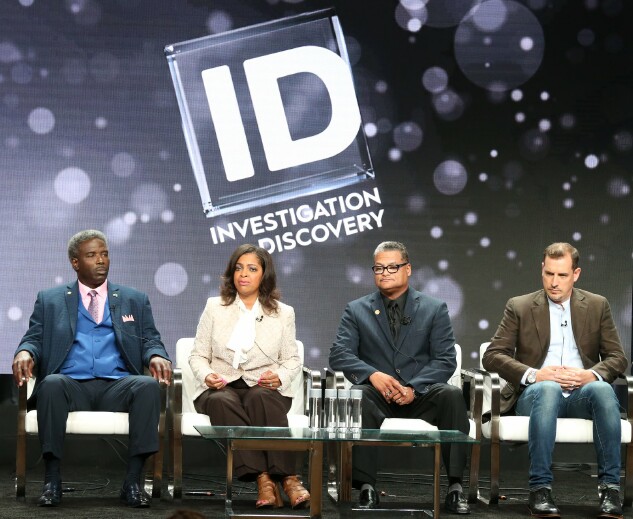 Beverly Hills, CA:  Investigation Discovery stood out during Discovery's extensive presentation last week at the 2018 Summer Television Critics Association tour with a powerful panel for its upcoming documentary, Sugar Town. Directed by Shan Nicholson, it follows Reverend Victor White and his family’s search for justice after the tragic fate of their son Victor White III, who in 2014 at the age of 22 died under very mysterious circumstances while handcuffed in a police car.

On that terrible night White was confronted by police who suspected that he had been involved in a fight at a nearby convenience store, despite being blocks away when the dispute arose.  There were two separate searches but no weapon was found; police used a dime bag of marijuana found on White to place him under arrest and take him into custody.  The events that took place on the way to the police station are what make his death an infuriating mystery.  White was reported by the police to have committed suicide by gunshot while in their custody.  What is dumbfounding is how a man handcuffed behind his back was able to produce a gun and shoot himself in his chest.

“That’s pretty much why I named the case the Houdini Handcuff Case," said Carol Powell Lexing, the White family’s attorney, during the emotional TCA panel.  "Short of him being Houdini, how could he shoot himself in the back while he was [restrained] with hinged handcuffs that don’t give?  [In light of] all the evidence that we gathered in this particular case, you can tell if you look at [it] that he did not commit suicide; nor did he shoot himself while handcuffed behind the back.”

As it happens, Iberia Parish Sheriff Louis Ackal and his entire department had been at the center of multiple controversies prior to White's death.  “Other deaths had been committed [since] he had been elected sheriff,” said Rev. White, who is still seeking justice for his son.  “They were used to getting away with it, because [Ackal] said he was the most powerful man in the state of Louisiana and that’s how he had seen himself."

"My other son called me that Sunday night and told me that the police had arrested Little Vic," Rev. White movingly recalled.  "I called the sheriff’s department to see if they had my son in custody and I was told no and then I called back again and I was told no again. So at 5:42 on Monday morning, my same son called me to say, 'Daddy, they called. They said Little Vic is dead and they wanted you to call.'  So I called up the Iberia Parish Sheriff’s Department again and I was told that my son was dead and they needed me to come to New Iberia.  Finally someone from the Louisiana State Troopers called me, and she told me, 'I need you to come to New Iberia and we need you to come here quick, but be careful.'  She told me that my son was dead and I asked her how and she said, 'I can’t explain to you and I can’t tell you how without an investigation.'  It was a two-hour drive and when I got to New Iberia, they didn’t want me to see my son.  I was refused access to see my son’s body and it took them a two-hour period [before] they did let me in and then they told me there was a stipulation and the stipulation was that only one person could go back and I could only see him from the neck up."

“We have lawmen who have become lawless and it’s problematic, not only for Louisiana but for America.” said Tony Brown, a broadcast journalist, local New Iberia activist and a radio host.  “We have people like Louis Ackal who are in charge, who are training people to violate normal citizens’ civil rights.  It’s a tragedy that must be addressed and this story must be told.”

"This story obviously took place in New Iberia, but I hope we all recognize that  ... this happens not only in Louisiana, or the South, but across the United States," said Henry Schleiff, Group President, Investigation Discovery, Travel Channel, American Heroes Channel and Destination America.  "This is the kind of story that needs coverage.  So, thank you."

Before the Sugar Town panel Schleiff made several announcements about upcoming programs, including Barbara Kopple’s documentary film A Murder in Mansfield.  “It's an extraordinary look at the death of [a woman] at the hands of her estranged husband and the devastating impact it had on their then 12-year-old son, who testified at his father’s trial,” he said.  He also revealed that the next installment of ID's franchise American Murder Mystery will be about Pamela Smart, a New Hampshire high school employee who received a life sentence in prison after being found guilty of conspiring with a 15-year-old student who was infatuated with her in the murder of her husband.  The Smart scandal was the subject of the 1995 movie To Die For starring Nicole Kidman.  “Now, more than 25 years later, Pamela Smart still maintains her innocence and is petitioning to be released from her life sentence,” Schleiff noted.  Pamela Smart: An American Murder Mystery will include a new interview with Smart herself.

Pamela Smart: An American Murder Mysterywill be telecast in two parts on August 19 and 20.

A Murder in Mansfield will premiere on November 17.