Upfront News and Views: Stars Were Shining at Screenvision Media 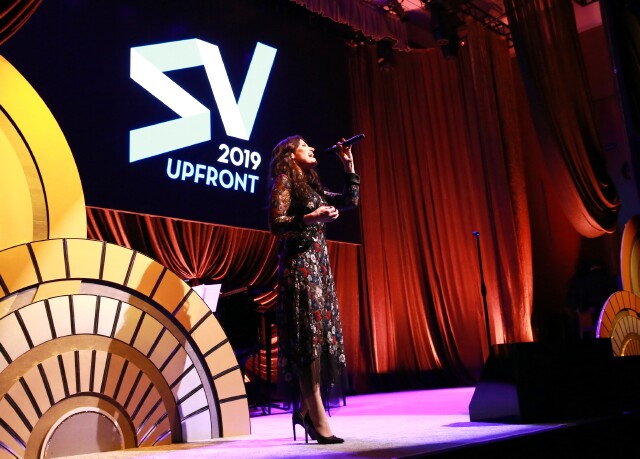 The final week of the Upfront/NewFronts event cycle included an appeal on Wednesday from the cinema advertising specialists at Screenvision Media.

Venue:  The Ziegfeld Ballroom on W. 54th St., previously the Ziegfeld Theater, one of the last great classic movie palaces in New York or anywhere.  What an impressive renovation from top to bottom.  Dressed up in sparkling, striking black and grey, the walls and carpeting at the entrance are lush, and the employees at the door warmly welcomed everyone.  A champagne glass pyramid was set up inside the ballroom itself, and you could smell the champagne from outside the room.  A gigantic Academy Award statue was displayed on the right side for photo/selfie ops, and popcorn was served as people went to their seats or blue couches located in the front and back rows.  A grand piano was set up center stage for use near the end of the presentation.  Overall, and we don't use the word often, a magnificent space.

Presentation:  In previous years, Screenvision management would engage attendees with trailers from upcoming movies or quick parodies on different movie genres.  This go-round, Screenvision Chief Executive Officer John Partilla, when not waxing about the benefits of cinema advertising, demonstrated his inner passion for hosting a talk show via interviews with two-time Oscar-winning actress Hilary Swank and actor Vince Vaughn.  Both segments encouraged the stars to reflect on their experiences watching movies on the big screen, with all the amenities.  "Movie theaters are indeed today's cathedrals of storytelling," Partilla said.  "There's no better platform than cinema."  Chief Revenue Officer Katie Loria, joined by Executive Vice President, National Ad Sales Christine Martino (pictured below right with Loria), maintained that in the face of declining TV ratings and growing allegiance to Netflix and similar commercial-free programmers, pre-film commercials are a solid way to reach today's decision makers.  "Every year you are paying more on TV and getting less," Martino warned. 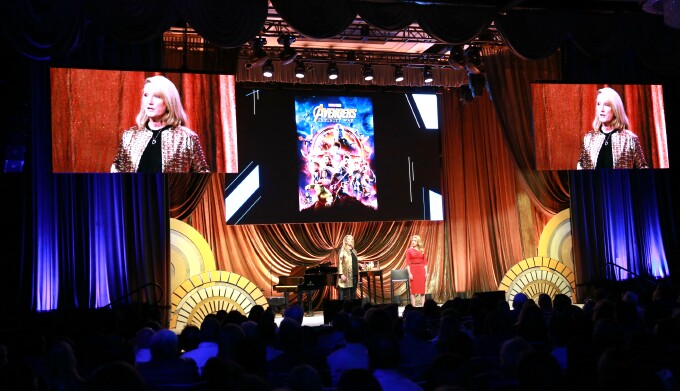 News:  Front + Center, Screenvision's pre-film mix of ads, behind-the-scenes segments and coming attraction trailers, will launch a new, recurring feature in partnership with the Geena Davis Institute on Gender in Media.  Davis herself will spotlight movies certified with a GD-IQ tag by way of furthering gender diversity.  Another new segment, involving the Association of National Advertisers' ongoing "See Her" campaign, will call attention to films featuring empowered women.

Host: Partilla had a fun time interviewing Swank and Vaughn; so much so that Screenvision should seriously consider a "conversation with the stars" platform for him inside Front + Center.  Loria and Martino continue to shine together with their segments.  Any chance they can get their own in-theater spot -- maybe as co-hosts of a short subject anthology or audience participation segments?  Just wondering.

Star Time: You could tell Swank and Vaughn had a great time being interviewed in a friendly setting.  For the finale, actress/singer Idina Menzel (pictured at top) delivered a three-song set (accompanied by solo piano) that gets a nomination for best 2019 Upfront/NewFront musical turn.  She hit a home run singing the two defining tunes of her career to date -- "Defying Gravity" from Wicked and, of course, "Let it Go" from Frozen, with a few audience members joining her on stage to sing the latter's chorus.  (FYI:  Menzel will perform two new songs in the upcoming Frozen 2.)

Innovative Opportunity:  Participation in the "See Her" segments, along with the second year of "10-Pak," where a campaign runs during the opening weekend of ten blockbuster films.

Key Takeaway:  Star participation added a great deal to Screenvision's quest for more in-cinema clients.  Two ideas that could make the case more appealing: A) show off made-for-cinema commercials that resulted in an increase in product sales or service usage, and B) diversify Front + Center itself with new segments.  Try out some different concepts, like science/technology updates, sketch comedy or pop culture profiles.