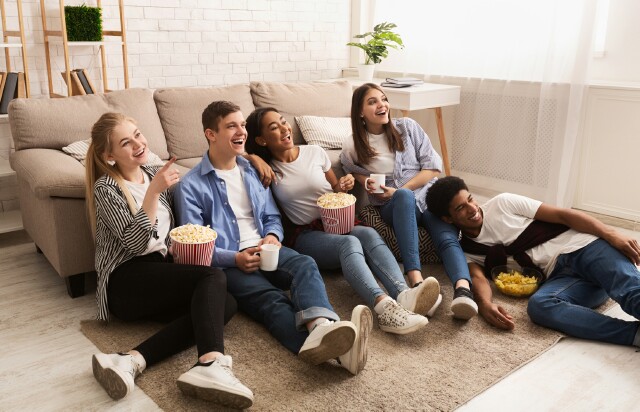 In the '60s I had a vision of being able to passively measure television audiences using a carry-able device the size and weight of a deck of cards. The technology was being used already but it was not carry-able -- instead it was used from trucks to measure untaxed TV sets in England -- yet my research confirmed nothing was stopping it from fitting in deck-of-cards dimensions. By 1980 I evolved a better idea of making it a wearable like a wristwatch. I published that in one of the first issues of my Media Science Newsletter, which was widely read globally by actual and aspiring media gamechangers.

About ten years later I found that a French company had turned the idea into a thing called the Motivac meter, which detected people in the room with a TV set, and actually worked. One of the business people who helped make this happen was a cool guy named David Gamrasni.

At the time I happened to be consulting for the CEO of Arbitron, Rick Aurichio. In that role I was pulled into a meeting with the head of network sales, Pete Megroz, and most of the top management, where I learned of a plan that had been set in motion by Alan Wurtzel, then head of research at ABC.

Alan had lost patience with diaries and wanted Arbitron to create an electronic diary that would save as much work as possible for diary keepers. He likened the device to an advanced Hewlett-Packard hand calculator. Early work had already been done on it by Arbitron by the time they brought me in. In the slides shown at that meeting, I saw that the idea had gotten off to a bad start. Respondents were asked to go through an arduous set-up questionnaire which asked them lots of unnecessary questions, such as their names, addresses, phone numbers and cable operator (if any) -- all of which Arbitron would know already by the time the respondent had the device in hand. I pointed this out and Pete got a funny look on his face and reported that he had been spanked by Alan already for those mistakes.

To make a long story short, by some trick of fate, or perhaps my mojo for having invented the ADI for Arbitron when they were going out of business, thus averting the latter, I talked them into making the device so easy for the respondent it would do all the work, eliminating even the need to make diary entries. I wrote a plan and called the device ALAN, standing for Automatic Lineup Analysis of Networks. It would have been better named Portable Passive Peoplemeter, but that would not give us the acronym ALAN, so we temporarily stuck with the misnomer ALAN. We did not see Arbitron going forward with this ambitious plan without Alan funding it (subscription revenues) and that would probably get us funding from the other big networks as well.

My idea of a fully automatic device would have been stillborn in that conference room had not Rick Aurichio backed it, which he did ... not only because of his being a genius, but also because he had become friends with David Gamrasni (with whom he liked to talk about rugby). Rick sent me on a mission to Paris in 1990 to meet David and together to get the technology we needed for ALAN.

In Paris David and I hit it off and he brought us to Bertin (pronounced Bear-TANH), a technology company, where due to David's drive we signed a contract giving Arbitron the option to develop ALAN using Bertin's spread spectrum technology.

I had finagled the timing of the trip so that afterward I could fly down to Cannes and take part in the annual MIP (pronounced "Meep") conference. In those days I was a member of the press corps as result of Media Science Newsletter, and the press were treated very well by the organizers and the companies participating. Even the posh speakeasies treated people well who wore their MIP Press badges when seeking entry.

At a small bar in Cannes, I met a French paratrooper who spoke no English, but my French was serviceable in those days, especially during alcoholic lubrication when I had no doubts. We had a couple of drinks and it seemed time to go somewhere else seeking adventure. The big guy had heard of a place where people went to meet people and dance with them that was hard to get into, and nearby. I encouraged him to believe that we could get in and put my badge back on. We took a walk.

At the door I was met by a guy even larger than my new friend, and with a much sterner expression, I idiotically repeated the words "MEEP! MEEP!" while holding my badge up so that it could be identified. The bouncer's attitude became instantly cordial and he led us in to two seats at the very long bar encircling the very large dance floor which had a low stage at one side.

We ordered drinks and looked around to see who the alternative dance partners might be. A number of ladies were hanging out on the side of the dance floor, and some couples were dancing, some of them being two ladies dancing together as if warming up for the handsome strangers they would meet.

It was time for my friend and I to ask the ladies in the standing group to dance. This would normally have been a situation I would have avoided. Somehow, the signed contract sitting in my hotel room had emboldened me, and we went and found partners and danced.

Flashback: from ages 5 to 17 I had been a "professional" dancer, specializing in mambo, but adept at all LATAM dance forms. It was a game at which I could easily slip into Flow state. By 1990, I might have been a mite rusty at remembering taught steps, but I was undaunted at improv dancing, which is what everybody was doing that night anyway.

That was when I got a hairline fracture in my right heel, on which I landed. That was it for me. I packed it in and walked home alone, very slowly.

Getting through the airport was also very painful. I got home and brought the contract to Arbitron. People were pleased, not expecting so much tangible progress so quickly. The technology was then sent over and tested for Arbitron and the industry by the legendary Julie (Jules) Barnathan of ABC, their CTO. Unfortunately, it didn't work in older TV sets. However, Sperry Lockheed in the U.S. had a similar tech which worked fine in all sets, and that became the PPM.

The decision was made to use it first in radio, and from there to experiment with adding TV.

This particular saga ends when, still consulting for Arbitron in the early deployment of PPM, Arbitron's Claire Kummer asked me how to handle the noncompliance problem -- i.e., sample members not carrying their PPMs with them at all waking hours. "Motion detector and incentive pay based on hours carried (usually in pockets or handbags where they still work)," I advised, and that was adopted, lifting the compliance rate from ~60% to ~80%.

Today, Nielsen owns Arbitron and the PPM. They are already migrating PPMs to wearables, with one of the common forms being like a wristwatch.