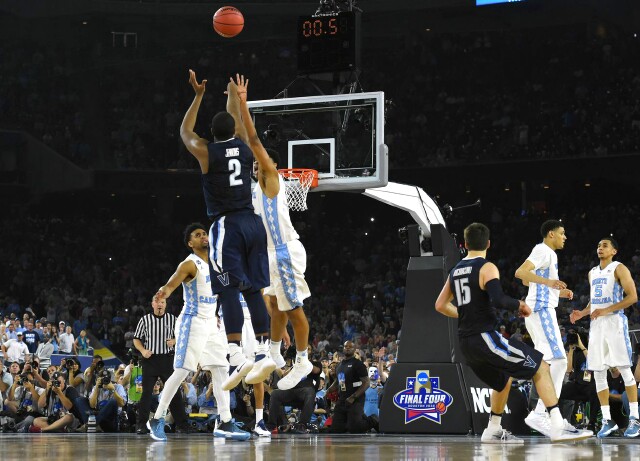 The 2020 version of March Madness on Sunday would have decided the final eight entrants to the NCAA’s Sweet Sixteen hoops party.  Instead, our Coronavirus-disrupted world left sports fans, socially distanced in their homes, scrambling for action on March 22.

Turner Sports and CBS Sports -- the co-rights holders to the Men’s Division 1 Basketball Tournament through 2032 (perhaps 2033, now?) -- had sold out this year’s inventory more than a month before things were slated to tip with the First Four in Dayton on March 17 and had to go their benches.

TNT (with the three Star Wars prequels) and TBS (with movies including 50 First Dates and Central Intelligence) filled their bracket with features, leaving it to truTV to evidence a sense of Madness, courtesy of the Impractical Jokers.  Joe, Quinn, Sal and Murr matched up some of their best moments in the NCAA March Madness Bracket Attack.  Hard to believe, though, that in the episode that debuted on March 12, 2017, Murr -- oiled up, stripped down (to an American flag Speedo) and showing off body-building poses during a failed interview with Danica McKellar -- fell to Sal, who merely had Will Smith’s kid Jayden’s face temporarily tattooed on his thigh.

CBS visited the ghosts of tournaments past with a tripleheader of title games, tipping with a reprise of the 2008 contest.  John Calapari’s Memphis Tigers, including Derick Rose, missed a ton of free throws down the stretch, allowing Mario Chalmers’ three to send matters into overtime.  Once again, the Jayhawks prevailed easily in the extra session.

New York City Mayor Bill DeBlasio’s expansive press conference and urgent call for supplies bumped the second half of last year’s championship, Virginia’s win over Texas Tech, and the start of the 2016 final on WCBS-TV.  Earlier in the day, New York Governor Andrew Cuomo provided his own lengthy update, including info that 18-to-49-year-olds accounted for 53% of almost 15, 200 cases in the Empire State.  In the time of coronavirus, that’s not the target demo.

The sporting news of the day, though, came courtesy of ESPN’s Bottom Line graphic: The International Olympic Committee said it will make a decision within four weeks on whether to postpone the Summer Games in Tokyo.  That decision seems inevitable: USA Swimming and USA Track & Field have both requested that the Games be delayed, relative to the health concerns and lack of access to facilities for proper training and preparation amid the COVID-19 shutdown.

Congrats to those who cashed in on SportsBetting.ag’s 12-1 odds about which nation would be the first to decline the IOC’s invitation to Japan from July 24 through August 9.  The Canadian Olympic Committee said its athletes will not compete in Tokyo this summer, calling for a one-year postponement.

Back in CBS’ time portal, the 2016 Villanova-UNC matchup did not disappoint.  Down three with 4.5 ticks to go, Tarheels southpaw guard Marcus Paige went airborne, leaned forward, legs splayed.  His double-pump found nothing but twine to tie it, eliciting analyst Bill Raftery’s signature “onions” sobriquet. Coach Jay Wright’s call during the subsequent timeout was perfectly executed.  Ryan Arcidiacono dribbled the length toward the top of the arch, drawing two defenders.  Kris Jenkins (pictured at top) trailed the play and nailed the 30-footer as time expired to give the Wildcats the championship.

ESPN2 morphed into ESPN 8: The Ocho, presented by State Farm, showcasing a smorgasbord of oddities:  pro arm wrestling from Mohegan Sun circa 2006, the same year Kobayashi out-scarfed Joey Chestnut -- 58 brats to 45 in 10 minutes -- during the Johnsonville-sponsored event.

For those who prefer the mechanical, there was the Stupid Robot Fighting League.  During tram racing, Brussels became the first city to win the championship in its home city over Moscow and Oradea.

That proved far more exciting than the 46th annual cherry pit spitting international championship from the Tree-Mendus Fruit Farm in Eau Claire, Wisc., despite an upset for the ages.

The rules were prominently displayed -- swallowing results in the forfeiture of one of the contestants’ three expectorant attempts, while hands must remain below the shoulders when propelling the object.  But this is a sport in serious need of a production upgrade.

Unless the spitted pit took a significant roll (like a punt, it’s the total distance, not the landing spot that counts) it was hard to detect the pit against the gray asphalt.  How about an on-court footage designation, or better still (channeling David Hill here) a glowing pit.  Kevin “Bulldog” Bartz, with a delivery of just over 58-feet, 3-inches, relegated Rick “Pellet Gun” Krause -- who had won the event 18 years running and whose training regimen includes lead sinkers and .357 magnum shells -- to third.

ESPN’s flagship, via a licensing deal -- if not the one some had expected that would bring Wrestlemania 36 and other key pay-per-view events to ESPN+ -- capped its night with a replay of Wrestlemania 30 from 2014.

Earlier, ESPN went all TB12: seven hours of the best and brightest of the career of Tom Brady, now the QB of the Buccaneers.  But isn’t ESPN supposed to be a national service?  Perhaps viewers in Massachusetts (except for one William Hoodie Belichick), Maine, Rhode Island, Vermont, New Hampshire and (parts of) Connecticut found this compelling, not to mention those in the Tampa Bay DMA.  For the rest of us, that was sheer programming Madness.