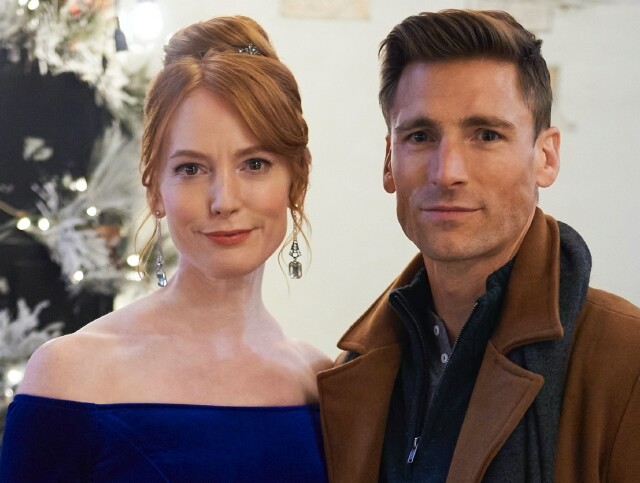 When it comes to Hallmark it wouldn’t be Christmas without a sprinkle of Alicia Witt, who for the past three years has been part of the annual Hallmark Movies & Mysteries Miracles of Christmas programming event. Witt continues that tradition this weekend with the premiere of the inspiring Christmas Tree Lane, co-starring Andrew Walker (pictured at top with Witt), Briana Price and Drake Hogestyn. It's the story of a music store owner determined to save her beloved street from being demolished by contractor who falls in love with an employee of the company she is fighting. For Witt, the project was special in many ways, including the fact that it is based on her original idea, and for the first time she executive produced. "This was an idea I brought to Hallmark [about four] years ago," she explained during an exclusive interview with MediaVillage. "We've been developing it off and on since then, and we ended up with a close-to-finished draft at the end of last year, but because we did a different movie (Our Christmas Love Song) we continued preparing the script for this year.

"It turned out that when we all kind of came out of that initial COVID shutdown, this was one of the only scripts that Hallmark had ready to film," she continued. "That's why we ended up as the first one out of the gate. We were actually the first major network or studio in the United States to go into production." 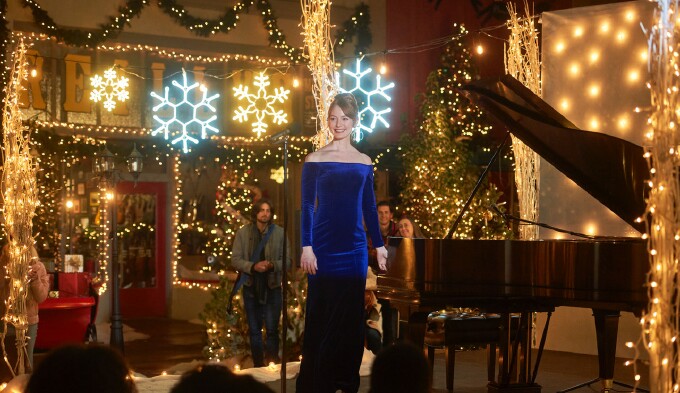 Witt describes going into production on the film as "surreal," as she didn’t realize that being the first meant its filming would end up creating the blueprint for the standards used on all productions shot under COVID-19 protocols. "[We started filming] before SAG-AFTRA had officially put all of their protocols in place," she explained. "So, they were going off our [precautions] at that time and sort of coming out and visiting and making sure we were doing everything that was agreed to. But it was before [productions] had resumed in a widespread way, so we didn't know what to expect or what to make of it all.

"That final night we filmed, and the sun started coming up, there were a lot of tears," she added. "Kind of a Christmas miracle. It felt so emotional that we’d made this. Now many productions have successfully, and safely, been completed. All [new] productions are affected by COVID, but when we started filming in Utah, they had next to no cases. We felt it was a safe state to film in. By the end of our time there, Utah was on the list of states surging. We’re so grateful we were able to make this movie and put joy out into the world." 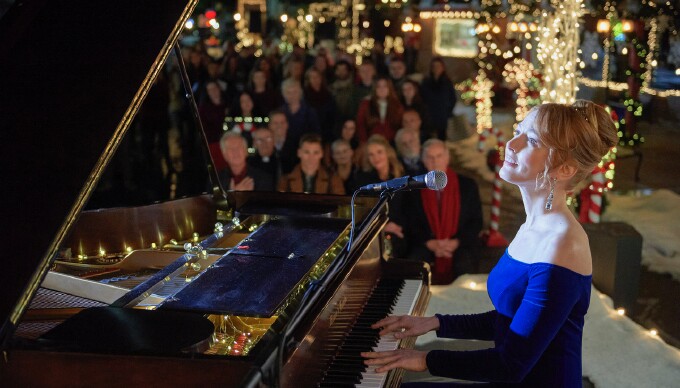 In addition to coming up with the idea, and helping to set COVID protocols, Witt contributed two new original Christmas songs to the movie, something the accomplished singer/songwriter was thrilled to share. "Why Christmas, which my character Meg plays for Nate (Walker), is a song I wrote last year and hadn't released," she said. "I felt it was a good song to demonstrate that (music teacher) Meg is an artist at heart, and even though she's been stuck creatively and hasn’t written anything in a while, it's still a very big part of her and something she should be doing whether [it’s] heard or not. I went into the studio and recorded it in Nashville and it’s out now (on iTunes). The other song is called Christmas Will Never End and Hallmark is releasing the piano-vocal version heard in the movie, so that will be available, too."

Witt tells me playing a music teacher in the film brought back all sorts of memories. "I did have a flashback to the teachers I had growing up in Massachusetts," she recalled. "How very much they inspired me and my love for music. I've heard stories from people saying, 'I wish I’d continued, but my teacher was so mean,' or 'I just I lost interest and started playing sports.' It's interesting how music is something people either stick with their entire life, or as a child it felt like an obligation. Not only did I genuinely love it, I was very blessed to have teachers that made it fun for me. My piano lessons were without question the thing I looked forward to most as a child and stayed with me my whole life."

The importance of community (and that it be diverse) is a through-line of the film she was delighted to highlight -- especially in current times, when coming together to effect change (in this case saving a beloved city street), while having to keep socially distant is difficult. "I was very involved in the casting," Witt shared. "That was very important to me. I wanted very much for this story to be about the family that we form through community, which is often almost as close to us as the family we have by birth. It's certainly true of me here in Nashville and for my whole life. My family has been my community and my friends, those people I can count on no matter what.

"My deepest wish for this movie is that it helps bring smiles to faces," she added in closing. "I hope it helps connect people to what's most important, especially in this incredibly strange year. Hopefully, it gets people in the Christmas spirit. I genuinely feel like if ever there were a time we needed an early Christmas, it’s 2020!"