"All in the Family" Remains a Controversial Classic of Uncommon Quality 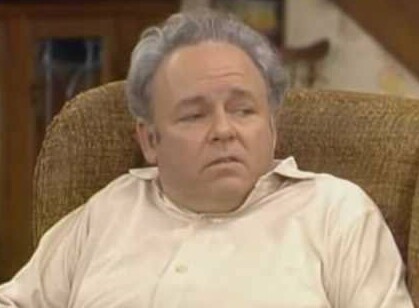 I recently asked my colleague Ainsley Andrade to watch a few episodes and write a critique of one of television's most significant classics, All in the Family. I'm old enough to have watched the original when it first aired (January 1971 -- April 1979), and even then I knew it was something special. But with each passing decade I am reminded that there really has been no other series like it in the history of American television. Conversely, Ainsley had never seen the show … he only knew of it as "the comedy about the bigot." What, I wondered, would a young man of color who was born long after All in the Family and its continuation as Archie Bunker's Place (September 1979 -- April 1983) had ended have to say about it today?

As regular readers of his column know, Ainsley is very outspoken about the presentation and all-around treatment of Black people on television. I expected him to laugh at Archie Bunker -- the central character on the show -- who always struck me as such a buffoon that the bigotry and sexism that had been baked into him throughout his upbringing came off as ignorant and, of great importance in a comedy, often very humorous (bizarre as it is to say that today). Importantly, viewers laughed at Archie, not with him -- just as they laughed at his neighbor George Jefferson, a Black man with a similarly bigoted approach to life. Also worth mentioning: The legendary Norman Lear, who was an executive producer of All in the Family, has said in interviews that when he looks back on Archie Bunker he sees a man who never had any fun.

When discussing this show with teens and twentysomethings today I try to put it in context. All in the Family was indeed controversial and provocative, but is broke barriers, started conversations between generations and elevated "sitcom acting" to an entirely new level. It was something completely new at a time when TV offerings were still very limited. (If you were lucky, your choices were three networks with content custom-designed to appeal to advertisers, a regional PBS channel or two and a smattering of programming on local stations.)

The world was a different place back then (though not as different as you might think, as noted at the end of this column). I was very young, but never for a minute did I think when I watched All in the Family during its original run that Archie Bunker came from a place of hatred or malignancy. He was a product of his environment. His father was cold and at times abusive. His family had no money and struggled like so many others just to keep a roof over their heads and food on the table. Archie was not at all well informed or educated (his gift for mangling the English language remains unequaled) and often such a fool that he was the very opposite of a role model. (At no time did he make bigotry appear acceptable or desirable.) Even if you thought he was funny, you couldn't take his views seriously, nor would you want to be like him. But he wasn't deplorable. That was the genius of the writing and of Carroll O'Connor's legendary work as the actor who brought Archie to life.

Of course, there was much more to All in the Family than Archie's ignorance. It was an outstanding study of a very real American working-class family at a time when the working class was being ground to dust under pressures from every direction, especially on the economic front. Archie was a devoted husband and father who spent almost every waking minute working to provide for his wife Edith (the magnificent Jean Stapleton), daughter Gloria (the egregiously underappreciated Sally Struthers) and son in law Mike (the eternally cool Rob Reiner).

In fact, over the course of the series Archie's legendarily racist mindset actually softened, thanks to the relentless influence of sweet, open-minded Edith, budding feminist Gloria and unwavering progressive Mike, not to mention cool cat Lionel Jefferson and his mother, Louise (before they moved on up in their spirited spin-off).

But Ainsley didn't see it that way. He didn't care for the show at all. Here's what he says about Archie in his new column:

"Archie Bunker was a racist, sexist piece of sh*t with this heart of gold that everyone keeps talking about but that I'm too busy being offended by to find. I've programmed myself to shut people like that out and take solace in the idea that one day society will leave their ancient and bigoted ways behind, like the ignorant dinosaurs that they are."

Of course, Ainsley is too analytical to leave it at that.

"Maybe sitting through an episode of All in the Familynow isn't as much fun for me as it was for viewers back then because I have much more up-to-date and relatable content available to me," he continues. "Maybe the reason that content is able to exist at all is because of the fact that All in the Family opened the door for shows like itself to exist, and maybe the reason that any of that stuff worked at all is because Carroll O'Connor gave us the villain that we needed him to be. If after 50 years of impacting American culture this show's greatest achievement is the space it would eventually create for other works to push the envelope and address the issues they feel that they must, then I'd say that all of that would have been impossible without O'Connor being the ally we all needed by giving us the villain we all hope to one day live without."

In hindsight, and as Ainsley suggests above, when it comes to appreciating All in the Family and seeing Archie as anything more than a "villain" I guess you had to be there at the time. TV viewers never had a racist enter their living rooms on a regular basis (unless one lived there), nor an extraordinarily ordinary sitcom wife and mother like Edith, who existed in a real-life universe far removed from those of the sterling sitcom moms portrayed by Jane Wyatt, Donna Reed, Barbara Billingsley and others. Heck, I don't recall watching any other scripted sitcom that featured funny and outspoken people of color before All in the Family came along. (The Jeffersons aside, Sammy Davis Jr.'s guest appearance on the show is a treasure. It remains one of the funniest episodes of any situation comedy ever.)

Truth is, Archie would never be perfect, but his trajectory and personal growth over time -- across All in the Family and Archie Bunker's Place -- nevertheless mattered. In fact, in one episode of the latter he was so offended by the racist remarks made by one of his lodge brothers that he flattened the guy with a punch to the gut and quit the group. The enlightenment of Archie Bunker, such as it was, came via a long, slow build spanning more than ten years. That's something nobody appreciates in an era of non-existent attention spans, instant gratification and growing impatience with just about everything.

Speaking of which, here's something else for Millennials and Generation Z to chew on when contemplating the phenomenon that was All in the Family: Mike, Gloria and Lionel, who were very vocal supporters of civil rights, gay rights, women's reproductive rights, helping the homeless, equality and inclusion for all -- and were openly opposed to war, racism, sexism, homophobia, the inequities of the economy and the destruction of the environment -- were Baby Boomers!

Now check out Ainsley Andrade's take on the show.