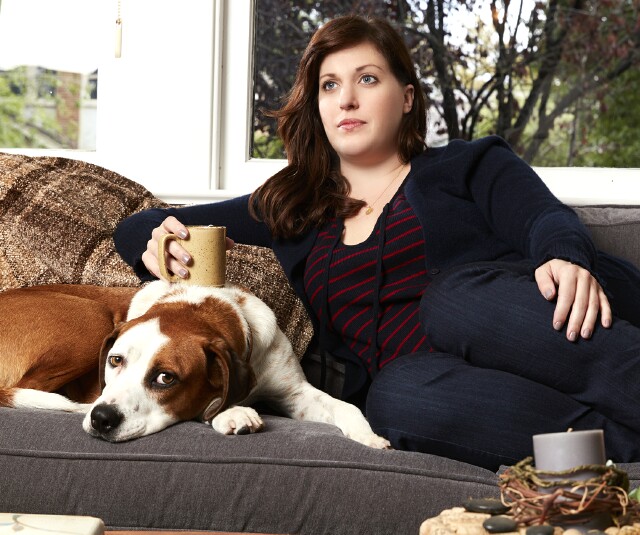 If Fargo star Allison Tolman believed in “never working with animals” (much less the talking variety) she wouldn’t be on TV right now. In ABC’s quirky summer series Downward Dog, she plays Nan, a work-obsessed advertising creative type with two guys in her life; Jason (Lucas Neff), her slacker ex, and Martin (Ned), a soulful-eyed talking pooch whose take on daily life forms the series’ narrative.

Unlike ABC’s unsuccessful Jenna Elfman project Imaginary Mary, Tolman isn’t deep in two-way conversations with her canine co-star.  Instead, Martin breaks the fourth wall, directing his monologues at viewers.  No one was more surprised than Tolman that she wound up on a talking-dog show.  “I got an e-mail [from my team] saying, ‘Here are the things we are looking at and think you should read. This one has a talking dog,” Tolman told me. “I was like, what …?”

Fresh off the first season of the critically acclaimed FX series Fargo, Tolman wasn’t overly enthusiastic about sharing the screen with a talking dog and e-mailed her team with real concerns.  “I did say, ‘I’m slightly concerned because one of these shows says the star is a talking dog?’” she recalled.  “But sure, send the script over. I read it and was super confused because the jokes were funny, it was clearly smart, but I was so confused.”

A viewing of the digital shorts the series is based upon provided clarification. “After watching those I got it,” she said.  “Then I met with the guys doing the show and I was all in.  It’s funny how quickly the fact that the dog talks becomes the least important thing about the show.”

According to Tolman, having the series on ABC, a network celebrated for traditional sitcoms, also offered her pause.  “I was really surprised when they said ABC had won a bidding war for it,” she said.  “I was like, is that where we feel we should go? Is this the right place for us?

“But they wanted an edgy comedy and had been looking for this type of show,” she continued.  “They do what they do so well, but they wanted to mix it up a bit, so the talk was, ‘Let’s try this other thing.’  They didn’t bid on us hoping to take the show and make it into a sitcom; they bid on it hoping to take the show and let it be what was.  I came from this golden experience with Fargo, where we never did a pilot and went straight to order. It was just a very different experience, so it was a little scary for me taking on a very different network show and saying yes." 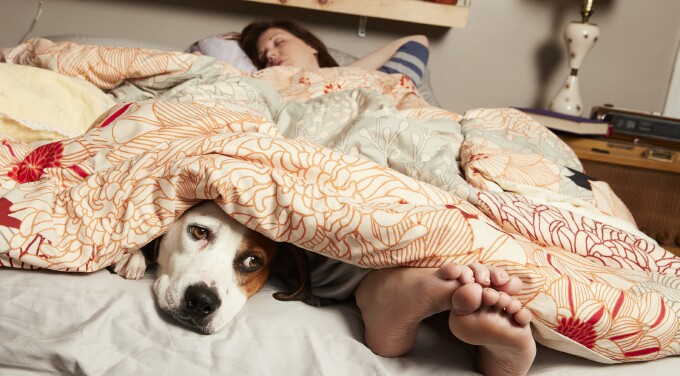 The fact Downward Dog was a short-order, eight-episode series did make the decision easier.  “That was a major thing,” she admitted.  “I felt very strongly about a short season because first of all I was nervous about spending six months of my life [on location] in Pittsburgh, but also the show was so strong and I didn’t want it to become a case of, this is the episode where Martin chases a squirrel.  This is one where he catches it.  It was such a un-sitcom sitcom, and I didn’t want to lose that.  I was worried what we’d do with a 22-episode order. Everyone involved felt very strongly that it should be a short season.”

Thankfully for the self-confessed “cat person” there was immediate chemistry with co-star Ned (the rescue dog who plays Martin), otherwise it could have been a disaster.  “The producers fell in love with his big brown eyes,” she said. “He’s nice to me, but not as nice as I am to him.

“It is hard though,” she added.  “With an actor you can act like you’ve known them and kinda fake it till you make it, but a dog is not in on that.  I grew up with cats and dogs, so there’s no divisive line.”

Announcement of a second season of Downward Dog awaits, but should it happen, Tolman reveals there will be some changes.  “It would be us coming back with a different story,” she shared.  “The question of the first season was work or love?  The second season, if were lucky enough to get one, would be about the repercussions of the choice [Nan] ultimately makes.”