Amazon at TCA: “Making the Cut” Makes the Grade 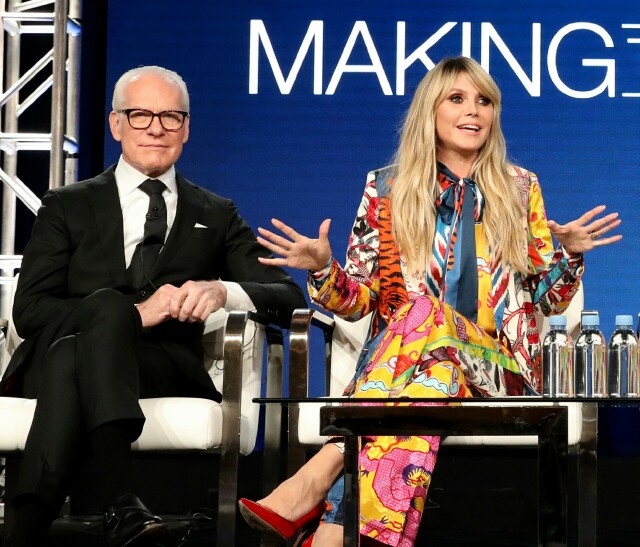 There has been a lot of talk about Amazon at the Winter 2020 Television Critics Association tour, particularly during the Fox and PBS days, little of it positive.  But that changed during Amazon’s segment of the tour on Tuesday.  It began with an executive session in which Jennifer Salke, head of Amazon Studios; Albert Chang, COO and co-head of television, and Vernon Sanders, co-head of television talked about a dizzying amount of new programming coming to Prime Video, much of it designed with global appeal in mind, and all of it uncommonly ambitious.  The global theme carried over into a later panel for Making the Cut, Amazon’s upcoming fashion competition series that stars and is executive produced by Heidi Klum and Tim Gunn.  Call it Project Runway on steroids.

Making the Cut will feature 12 diverse designers competing for an opportunity to turn their individual brand into a global phenomenon.  That means impressing Klum, Gunn and judges Joseph Altuzarra, Nicole Richie and Naomi Campbell with their ability to make business deals and communicate with people, as well as design distinctive and desirable collections.  Winning looks will be available for purchase in the Making the Cut store on Amazon Fashion immediately after each telecast.  The series was filmed in New York, Paris and Tokyo.

According to executive producer Sara Rea, who joined Klum and Gunn on the panel, Making the Cut seeks to do nothing less than find and promote “that really looks for the next great global brand.”  To do that, they set out to “travel the world with [our] fashion designers and entrepreneurs, put on fashion shows around the world and create this situation where they're set up for success when they leave us.” 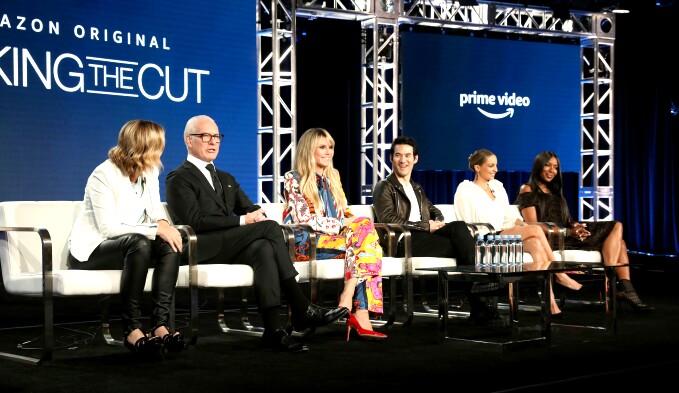 That expansion of the Project Runway concept would certainly seem to be enough to separate Making the Cut from Klum and Gunn’s previous series, but there was another key aspect to Amazon that appealed to them.  “For the first time, finally our audience can shop,” Klum explained.  “I feel like it's a win/win situation for everyone.”  It was very important to her, she said, that they go with a company that offered that opportunity to the designers.  That meant a move to Amazon, rather than other companies that were interested.  “That was never possible before,” she said.  “You see something, you want it, but you can't have it.  Here, you have a winning look every week and people can buy it around the world.  We're going into over 200 territories and for me, it couldn't have been more of a perfect fit.  Also, these designers get help along the way, especially our winner at the end.  So, it's amazing.  It's like a real future for this winner.”

“To be perfectly honest about it, Making the Cut wouldn't have happened without Project Runway,” Gunn added.  “In my role as a teacher, I would say that Project Runway is the undergraduate program and Making the Cut is the graduate and Ph.D. program.  In Project Runway we talked about how a sleeve is set into a bodice.  You don't hear a conversation like that happening on Making the Cut.  It's more about, how does this minicollection you've designed for this episode's assignment fit into your larger view of your brand?  It really is about finding the next global brand.  And we do!”

One reporter wanted to know if the collections that are created on the show would have to lean more toward contemporary mass-appeal, rather than editorial or avant-garde, since the fashions are intended for sale on Amazon.

“We wanted to pick people from around the world, because we're seen in over 200 countries,” Klum said, adding that some of the designers are very established while others are not.  Some are young, some are old.  Each designer for every fashion show had to create two looks, one where they could really go for it and one that is really wearable.  We're also trying to price it at $100 or less for each winning look, because we wanted to be as real as possible, and we wanted to give everyone this opportunity.”

“I don't want anyone to think that we were thinking about a relationship with Amazon and thinking, oh, we have to dumb these clothes down, or these designs are too outré,” Gunn added.  “We know from the work that we've done with Amazon Fashion that things can be translated in such a way that they become affordable and that the fabrics are accessible.  It's been a joy rather than a challenge to work with Amazon Fashion in how that's done, and it hasn't in any way compromised the designers' work.  Though as Heidi said, the more accessible look is bound to be the one that's going to go on Amazon.”

Klum and Gunn were asked about the transition from Project Runway to Making the Cut.  Over the years as they were working on the former, were they secretly dreaming of something bigger and better?  Or did Amazon approach them out of the blue with an offer they couldn’t refuse?

“To be honest, for many, many years, our hands were tied because our imagination is bigger than what we were allowed to do,” Klum replied.  “Because, you know, there is a certain look to a show that you sometimes maybe don't want to change, and they don’t want to change.  And then when everything kind of fell apart and the show was going [back to Bravo, where it originated before moving to Lifetime] … I was like, ‘Okay, either we're gonna just go back there and it's gonna be same old, same old, or now [is the time] to jump ship.’  I called Tim and I said, ‘I'm jumping this ship, and do you wanna jump with me?  I don't know where it's gonna go, but I'm really eager to see what we can do."

“We jumped together,” Gunn said.

After calling Rea, with whom Klum and Gunn had worked for years on Project Runway, the three of them shopped the new show around.  “We thought that Amazon was the best place, not only for the show but also for the designers,” Klum continued.  “You can design as much as you want.  It becomes real when you see people wearing your clothes.  That's the most exciting thing.  We want it to be real for these designers and for people at home.  You see something, you want it, and now you can have it.  It was the perfect fit.”

Asked if the competition would include fashions for plus-size women, Gunn replied, “Yes! Most definitely!  And it's seamless.  We don't address it other than the fact that you see it visually in who the models are.”

“It should be everywhere,” Klum added.  “Not just on this show.”

“When we were casting, one thing that was important was diversity in design aesthetic, so that there was something for everyone and there are different looks walking the runway,” Rea said.

Does that mean the winning looks will be available in a wide range of sizes?

“Yes.  It’s going to be from triple-X small to triple-X large, and some actually extra-large,” Klum said.  “The sizing will be very inclusive.”

“And within the show, the models vary in sizes,” Rea assured.

“The wonderful thing about our partnership with Amazon Fashion is Amazon Fashion understands the issues pertaining to size,” Gunn said.  “That’s why the clothes from Making the Cut that will be available on Amazon Fashion will cover that very diverse range.”

Making the Cut will premiere on Amazon Prime Video on March 27.  Two new episodes will debut each week for five consecutive weeks.