Amazon's "The Boys" Turns the Whole Superhero Thing Inside Out 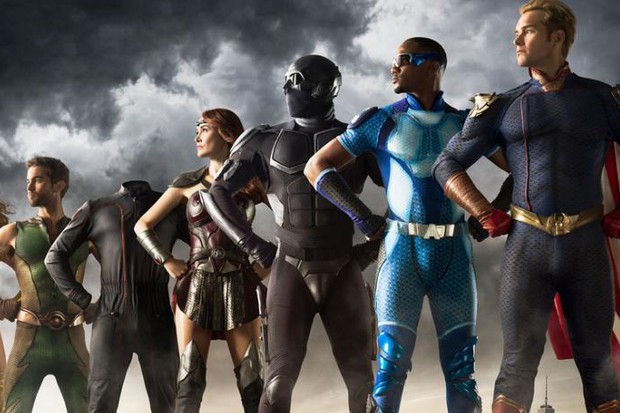 Superheroes are a huge part of American culture.  They fill our favorite comics, inhabit our posters and billboards, and are immortalized on our clothing.  They’re on our TVs, in our movies, and coming out of our phones.  Meant to represent all things good and pure in the face of evil, their heroic intentions are never questioned, but what if, besides being real, they were bigger deviants than anyone knew? What if the most depraved beings in the world were the ones our kids looked up to?  What if one major corporation controlled them all? Well, those are the questions that Amazon Prime’s The Boys both ask and answer and, thanks to creators Eric Kripke, Seth Rogen, and Evan Goldberg, the results couldn’t be more entertaining -- especially for those of us who think we've seen it all.  Because after any given episode of this mad thing it's clear we haven't seen anything yet.

Just like their project Preacher, Rogen and Goldberg have successfully adapted yet another gritty adult comic into a gritty adult action drama.  With Kripke at the keys, the trio tells the surprisingly grounded story of Hughie Campbell (Jack Quaid), an A/V tech who loses his long time girlfriend to a superhero-related accident.  This tragic event sends him on a violent journey that reveals the truth about corrupt megacorporation Vought, who’s managed to privatize superheroes altogether, quantifying their worth and making their squeaky clean reputations something that effects the bottom line, like an evil version of Marvel Studios.  Treated as celebrities and worshipped as gods, these “heroes” spend more time doing interviews and participating in publicity stunts than they do doing their actual job (which is supposed to be saving lives).

When we’re first introduced to Hughie he’s doing his job at what looks like a fictional version of a Radio Shack.  We see that he’s pretty well versed in this tech stuff, but doesn’t have much of a backbone.  After work, he walks home with his longtime girlfriend, Robin (Jess Salgueiro).  The scene begins playing out as it would in any other show or film.  The conversation between the two depicts the warmth and love in their relationship, and the hopeful future the two of them seemed to share.  The music, the camera work -- it’s all very romantic drama-y.  Robin expresses interest in moving in with Hughie, to his apparent delight.  They share a kiss on the sidewalk, she steps back, and Hughie holds both of her hands.  Then, just like that, right in the middle of a sentence, she’s gone.  Literally.

One second she’s standing in front of Hughie and in the next she has literally vanished.  As I watch my heart drops and my mind races.  Did she get hit by a car?  I didn’t see anything.  Where is she?  A shockwave carrying multiple drops of blood doubles back, hitting Hughie’s face, his eyes still locked on where Robin just was a second ago.  A loud boom is heard.  Was that the sound barrier?  The camera slowly pulls out of Hugh’s close up and pivots left, revealing a slow motion mish mash of blood, bones, and chunks of viscera occupying the aerial trajectory where Robin’s body should’ve been.  Then, just as I recognize a portion of jaw bone and a human leg amongst the midair carnage, and the horror of what just happened begins to dawn on me, time speeds back up and the whole bloody mess hits the ground with a loud and sobering slap.  Standing there, covered in Robin’s blood, is a Flash-type superhero named “A-Train” (Jessie T. Usher).  He ran right through her!  He stops just long enough to say, “I can’t stop.  I can’t stop.  I can’t stop,” and takes off again, leaving Hughie still holding the now dismembered hands of his very recently deceased lover.  So much for moving in together, I guess.

This horrific and visceral scene, in which a woman is straight up obliterated right before her boyfriend in the literal blink of an eye, is so powerful that it’s the perfect emotional anchor.  The normality of the situation, the close ups during their conversation, the abruptness with which Robin is suddenly gone … it all set me up to feel the same sequence of shock to confusion to horror that I’d imagine I’d have felt if I’d been standing there on the street myself.  It is truly a master class in emotional manipulation, besides being one of the series’ most important establishing sequences.

Robin’s death is met by Vought with the offer of a $45k settlement in exchange for Hughie’s signature on an NDA.  Turns out these instances of “collateral damage” happen all the time, and Vought cares more about suppressing that information in an attempt to protect their superpower-laden cash cows than they do about the truth, or human life in general.  Add to that the fact that most of the heroes on their roster have the kind of habits that would make Charlie Sheen look like Mister Rogers and it becomes clear that if turning the whole superhero thing on its head was the goal, Rogen and the gang have definitely succeeded.

Very much so in the same way that Game of Thrones flipped the concept of honorable knights, chivalry and fairytale kingdoms into the concepts of rapey knights, incestuous queens and bloody magic, so does The Boys flip the classic superhero tale into one of drugs, misconduct and debauchery.

This story isn’t only told through Hughie, though.  We also follow Billy Butcher (Karl Urban) and Annie a.k.a. “Starlight” (Erin Moriarty).  Billy’s got it out for Vought and the “supes,” and Annie, a supe herself, just got a spot on Vought’s answer to the Justice League: “The Seven.”  Billy is hell bent on killing as many of these superpowered liabilities as necessary, and as the stories of these three progress, viewers get an unfiltered look at the terrifyingly high levels of sociopathy taking place behind the scenes of Vought’s billion-dollar song and dance, and the impact affect it would have on normal people like us.

Vought’s Superman stand-in, Homelander (Antony Starr), is a straight up psychopath, which is terrible news for pretty much everyone, especially since he can also see through walls, fly, and shoot effin’ lasers out of his eyes.  Starr, like many others on this cast, plays the hell out of his role by the way.  So do Tomer Capon and Laz Alonso, who play Billy’s boys “Frenchie” and “Mother’s Milk,” respectively, as well as Elisabeth Shue, who plays Vought Executive Madelyn Stillwell.  Gossip Girl's Chace Crawford also does a bang up job as the weasel-y Aquaman stand in, “The Deep,” as does Jake Quaid, whose performance really made me root for him in the end.  Of course, Jess Salgueiro’s performance as Robin, as short as it was, was crucial, and really set the emotional pace for the entire show.

The Boys spends time breaking these characters down on a psychological level, showing us what they really do (and do not) care about, what they’re capable of ... and the collective and individual impacts they have on society when they’re deified personas far exceed who they really are. All of this while somehow still being a fun watch.  I binged through this in a single sitting, and I want to see it again.

Preachermore than exceeded my expectations when it first hit the scene, and now I feel The Boysexceeds anything Rev. Jesse Custer, Tulip, Cassidy, Arseface, Grandma, Herr Starr and God Himself had to offer.

The Boys is currently streaming on Amazon Prime at 8 p.m.