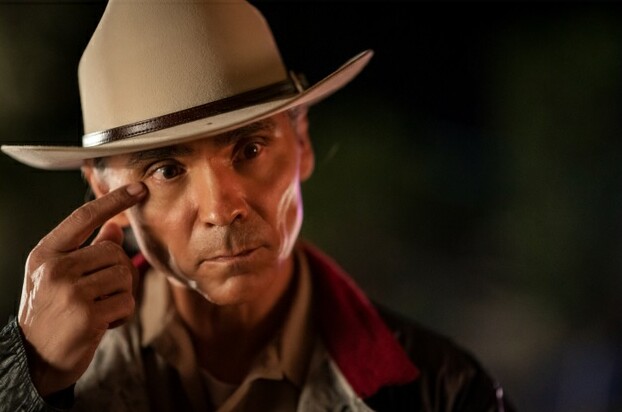 The compelling thing about AMC's Dark Winds doesn't only lie in its story and the stellar performances of the actors bringing it to life, but rather in its level of cultural accuracy. Set in the 1970s Southwest, Dark Winds follows Navajo police officer Lt. Joe Leaphorn and his partner Chee as they search for clues in a double murder that may or may not be linked to a high-profile bank robbery. This almost dynamite thriller gives viewers an intimate look into Native American culture, traditions, beliefs and some actual history that somehow only ever serves the plot in a positive way. Based on the Leaphorn & Chee novel series by Tony Hillerman and created for television by Graham Roland (Tom Clancy's Jack Ryan), Dark Winds takes us deeper into the reservation than we probably even deserve to be.

First off, we've got to talk about the show's lead, Zahn McClarnon (pictured at top). I first saw his work during his stint on HBO's Westworld as one of the wild west theme park's robot attractions, Akecheta. Even in the midst of that sci-fi/retro aesthetic, McClarnon still came with a level of authenticity that heavily informed his performance as a robot whose role was one of an Old West-period Native American warrior that ran with the "Ghost Nation." McClarnon manages to bring the same kind of gravitas and respect for the culture that he brought to the screen over there to Dark Winds. His Leaphorn is intuitive, intelligent and open-minded, on top of the fact that he's extremely loyal to his people, and respectful of the customs he grew up surrounded by, despite his western education. He's definitely up there as one of the great TV cops of our time.

Of course, it doesn't hurt that almost every shot of this show is beautifully framed. The desert, its rock formations, and the visual elements of Navajo culture all blend together beautifully to create a captivating backdrop for the thrilling crime drama taking place in the foreground.

Speaking of Navajo culture, there's a scene I found pretty interesting in regard to the history of some of the interactions that people, specifically women, from reservations had with white doctors. In the first episode, Leaphorn's wife and local nurse, Emma (Deanna Allison), is translating for a pregnant Native American woman while she gets a checkup. The doctor tells Emma to ask the young woman, a character we'd later learn is named Sally Growing Thunder (Elva Guerra), if she'd like to have her baby at the hospital, especially since, according to him, home births on the reservations are so "dangerous." When Emma does translate, what she actually says is, "He wants you to have your baby here, but after you deliver, he will operate on you to prevent you from having more children while you're under anesthesia." Sally's response is, "For what reason is the government complaining? They should make jobs available to us. Tell him." Emma turns to the doctor and says, "She'll think about it."

The government involving itself in the reproductive futures of the people it's trying to suppress is not a new thing, and while that's something I'd normally be talking about in relation to Black people in America, this scene makes it clear this type of f**kery affected other non-white groups as well, going all the way back to at least 1971. As recent real-life headlines have unfortunately shown, the government is still trying to take body autonomy rights away from every American woman to this very day, although in Sally's case they were being exponentially sneakier about it.

Another high point for the series is the number of actors in it that are actually of Native American decent. A good chunk of the Dark Winds cast has actually worked on FX's Reservation Dogs, which might point to how small this particular pool of actors really is. The level of talent across the board -- which includes the likes of Kiowa Gordon as Jim Chee, Jessica Matten as Bernadette Manuelito, the aforementioned Elva Guerra as Sally, and Eugene Brave Rock as Frank Nakai, among others -- is so high that buying into the reality of what's being shown to you is so easy it's almost second nature. This becomes especially true when the show takes a dip towards the more spiritual aspects of its plot.

That brings me to the one gripe I do have with the series -- its spiritualism. Ninety-five percent of Dark Winds is pretty grounded, but that other five percent definitely veers into some questionable territory from time to time. For example, most of the series revolves around Leaphorn trying to solve a very real double homicide that took place on Navajo territory, while the FBI is trying desperately to solve a major bank heist that involved a helicopter last seen flying into the airspace over Navajo land. Meanwhile, there's a whole side thing going on with a mining company, and land rights and mineral rights.

The point is all of that is very tangible and realistic. But then we have a scene in which a hair clip is buried by one woman in a ceremony meant to harm the woman who owns it. Then, by "coincidence," the owner of the hair clip is bitten in the neck by a black widow spider and falls into a coma (which is the soap opera equivalent of being put on the bench, by the way). Does this imply that the spiritual beliefs of the Navajo are literally consequential in the Dark Winds universe? Or is everything still as real and grounded as the illegal sterilization practices of the white doctor depicted earlier in the series?

As television continues to evolve, the need for the proper onscreen representation of all groups is simultaneously growing and continuing to be met. Just look at Ms. Marvel on Disney+, which is also infused through and through with accurate cultural references, as well as a pretty plot-dependent history lesson about the bloody 1947 partition (which happened at the end of British colonial rule in India, and led to the creation of Pakistan and India as two separate nations). Not unlike my learning of the Tulsa Massacre via HBO's Watchmen, so have I continued to learn more and more about the U.S. government's shitty treatment of various non-white groups over the years by watching scripted television. This historical accuracy in our fiction, and the themes that connect it all to the present day, seem to lie somewhere in framework of everything new and progressive on TV, and Dark Winds is no different in that respect. Good thing it has already been greenlit for a second season.

Dark Winds is telecast Sundays at 9 p.m. on AMC.