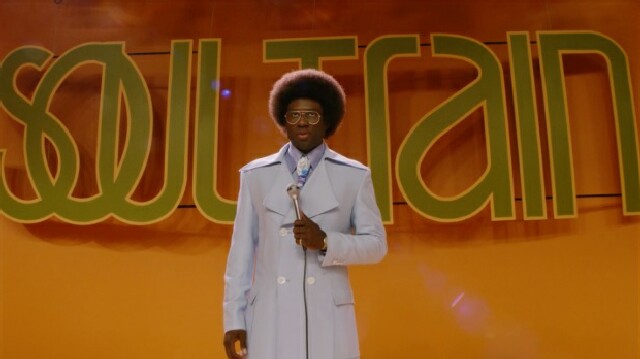 American Soul, a new biographical drama on BET, is, well… dope.  It feels like if Empire and Power had been around in the ‘70s and had a baby.  Enhanced by the appeal of knowing at least some version of these things happened, and supported by solid writing, likeable performances and an accurate yet not overstated depiction of the period, I’m not ashamed to say that this series reeled me in and kept me there.

Sinqua Walls -- known for his role on Power as “Shawn” (the son of 50 Cent’s character “Kanan”) and more recently for his role as “Terrance ‘Lil Ray’ Baltimore” on VH1’s The Breaks -- plays the legendary Don Cornelius, real-life entrepreneur and creator, developer and host of the also legendary 1970s American music-dance TV show, Soul Train.  It picks up Cornelius’s story from just before his show began airing (which, spoiler alert, it did, in syndication, for the next 35 years), and follows him through the arduous process of bringing unbridled black culture into the homes of millions of Americans every week.  This could have turned out to be some snoozer of a bio-show.  I very quickly realized it was anything but.

Donald Cortez Cornelius seemed to be many things: a passionate and clever businessman, a not-so-great husband, a black visionary, a verbally abusive employer, an ex-marine, an unstoppable trailblazer and a legendary host.  Each of these things feel true all at once.  With a character this complex, especially one who was a real person, one could only imagine how easily we could’ve ended up with some shell of a performance; a pantomime instead of a possession, if you will.  Thankfully, Walls was the right man for the job.  His gravitas, sincerity and range are honestly the show’s bread and butter.  Yes, there’s a strong foundation present in its amazing musical numbers, the entertaining story and the solid supporting cast, but there’s no denying that Sinqua’s Don is the loadbearing wall in this house of soul.

As far as the supporting cast is concerned, color me impressed.  Much like the other shows in this lane, a lot of this cast has been tasked with acting, as well as singingand dancing in some cases, and they all do rise to the occasion.  Kaitlyn Nichol and Jelani Winston (who play siblings Simone and Kendall Clarke, respectively) are nothing short of delightful to watch.  Their vocals are strong, their dance moves are crisp, and given the story’s musical spirit there’s no doubt as to whether they belong in this production.  The same can be said for Christopher Jefferson, who plays “Jefferey ‘JT’ Tucker.”  I didn’t see him dance, but he sang as well.  As for Kelly Price (who plays Simone and Kendall’s mother, “Brianne”) and Kelly Rowland (who plays living legend Gladys Knight), obviously they both killed it when the time came to flex those God-given vocal cords, and their acting was solid as well.

Besides all the singing and dancing, there’s a story with plenty of grit to focus on.  After all, it is the Seventies, and like most other American decades, things were pretty rough for those of us who had the misfortune of not being born white and male.  Don’s life wasn’t an easy one.  He served 18 months in Korea as a marine, worked a number of seemingly random jobs after that (including some time as a Chicago police officer), and spent more than his fair share of time being a starving artist/husband and father of two.  In a society that, up until recently, put so much pressure on men to be the breadwinners, I can only imagine what it was like doing that while black.

Honestly, that’s one of the things I really like about this show.  I feel like it accurately conveys that invisible extra layer of difficulty that people of color usually deal with.  Being black, even today, let alone in the Seventies, just adds an extra layer of bullshit to everything you try to do. I know that it’s not everyone’s experience, nor is it an experience that only affects black people (it works for pretty much anyone that’s not straight, or white, or male, as well), but it is something that exists, and American Soul nails that frustration perfectly (see: the traffic stop scene in the first episode).

All that said, Donny C. isn’t painted as a saint, but as a man of many faces who won’t let anything get in his way.  During the promo at the end of the second episode he says, “Right now you are standing in a dream.  My dream.  And in case you never had a dream of your own, let me tell you, it doesn’t come fast, cheap, or easy.  You will protect it at all costs.  I willprotect it at all costs.”  His hustler mentality is echoed by his business partner “Gerald Aims” (Jason Dirden) who, despite having one of the most likeable and damn near bubbly personalities on the series so far, is also a cold-blooded gangster, apparently.  It’s a great juxtaposition, as well as a different kind of complexity that pairs rather nicely with Cornelius’s personality strengths and shortcomings.

I’m also very excited about seeing more from Iantha Richardson (who plays “Tessa Lorraine”) and Shannon Kane (who plays “Ilsa Dejarnette”).  In the first two episodes alone they “bring it” with their acting, and I hope to see them continue to do so as the season continues.

All in all, I’d say American Soul is very much like the talent on its roster: Entertaining and full of promise.  We already know that Don Cornelius’s life was filled with more than enough drama to keep the writers inspired for as long as need be, but without a solid team of performers these soulful characters may have never been brought to life in a way that they (or we) deserve. Fortunately, that isn’t the case.

American Soul is telecast Tuesdays at 9 p.m. on BET.