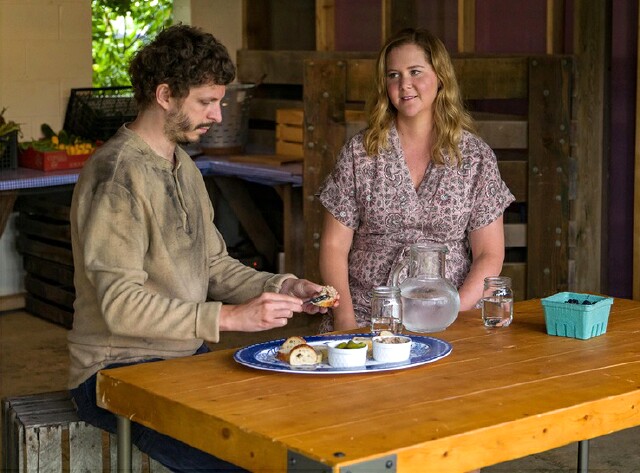 "I don't like the observational stuff. I like tackling the stuff nobody else talks about, like the darkest, most serious thing about yourself. I talk about life and sex and personal stories and stuff everybody can relate to, and some can't." Comedian Amy Schumer said that about her comedy just a little over ten years ago in the St. Louis Post-Dispatch, and after watching her in her new Hulu series Life & Beth, it's obvious that she's still holding true to those sentiments. This new series takes a serious look at a character who is finally beginning to question how she came to be the person she is, and it manages to be funny as hell while doing it.

Written, created by, executive produced and starring Schumer, Life & Beth follows the eponymously named Beth, a successful sales representative for a New York-based wine distributor. When she's not pretending to care about how some wine bar-owning 20-something got their start, it seems she likes to spend her time in various back-and-forths where she's awkwardly trying to convince someone else that she's happy with life -- all while she wonders if that's even true. She'd done a decent job of convincing herself for a while, but -- spoiler alert -- after the sudden death of her mother (Laura Benanti), Beth truly starts finding herself, reflecting on her past while she does so.

While Life & Beth is definitely not the first "I'm almost 40 so what is my life now?"-type of thing to come along, it certainly has a lot of elements that, when combined, make this series a pretty unique experience. First, it doesn't begin by painting Beth as someone who's down and out and in obvious desperate need of getting her life together, like similar shows normally would. Instead, Beth has what looks like a pretty decent life; one that looks good enough on paper that she feels like it at least should be making her truly happy, even though in reality it doesn't.

Her oblivious boyfriend Matt, played hilariously by Kevin Kane, is at least partially at fault for that unhappiness, mostly because he's the worst. In fact, most of the male characters in this show are awful in one way or another. (Through flashbacks we see glimpses of Beth's father Leonard before her parents were divorced, and while he loves his kids, he's also loud, financially destitute and has a day-drinker kind of vibe, all of which is perfectly brought to life by Michael Rapaport.) Matt unnecessarily talks on Beth's behalf, and regularly implies that he makes her life cool and fun because she's isn't those things. "Off-putting" is what he calls her. He also seems blind to Beth's actual moods and seems deaf when it comes hearing what she's really trying to say.

The rest of the supporting cast is pretty stellar as well. Comedian Murray Hill plays Murray, Beth's boss at the wine distributor; real-life pharmacist/comedian Lavar Walker plays fictional pharmacist Lavar; comedian Yamaneika Saunders plays Maya, one of Beth's closest friends, and relative unknowns Violet Young and Grace Powers play the young versions of Beth and her currently estranged friend Liz in Beth's flashbacks. To top it all off we see a bunch of other faces from the comedy world, which include Delocated's Jon Glaser, Abbott Elementary's Janelle James, Kate Berlant, John Early (aka Bejohncé), Dave Attell and Hank Azaria.

The one supporting character I haven't mentioned yet is John, played by Michael Cera (pictured at top with Schumer). John is a farmhand/groundskeeper at a Long Island-based winery owned by Glaser's character Gerald. John is a bit aloof, to say the least, and generally talks in a brutally honest and matter-of-fact sort of way. Underneath that slight harshness is someone who does genuinely care for the land and the people in the area, though from time to time his behavior does seem to indicate that he may possibly be on the spectrum. It isn't outright stated in the show, but in USA Today Schumer, who wrote the character, said, "he's most likely on the spectrum," not unlike her husband, who was diagnosed at age 39, and served as the inspiration for John.

The thing I dig about Life & Beth, besides it's particular brand of occasionally cringey humor, is all the heart it has. Beth constantly finds strength through her past traumas and uses that pain to grow. The funny part is, as writer and creator of the series, Schumer did the same when crafting Beth's story. A lot of her own pain and trauma influenced this story, and it shows through the performances. I don't know if this show will get a second season, but I also don't think it necessarily needs one, because L&B feels like a complete story as it is. But I'm interested to see what else the always surprising Schumer may have up her sleeve.

The entire first season of Life & Beth is available on Hulu.