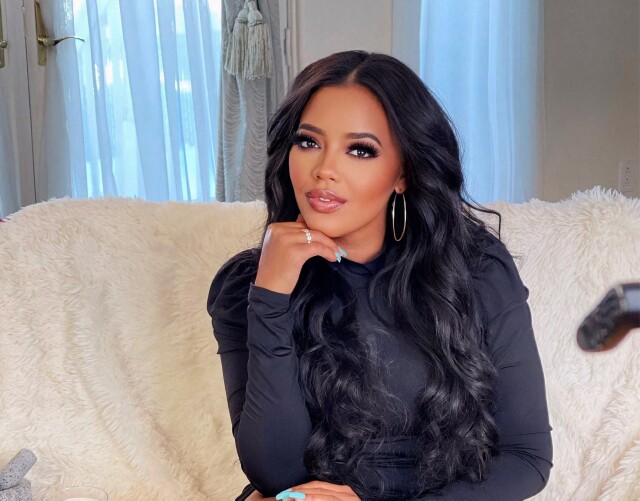 To say Angela Simmons is busy is an understatement. The celebrated entrepreneur, actor, reality star and single mom has three current television series: a second season of Just Angela, her lifestyle series on AspireTV; season six of her reality series Growing Up Hip Hop (on WEtv), and season two of the variety series Social Society (streaming on ALLBLK).

Much has changed in Simmons' life of late. The self-proclaimed "New York City gal" has relocated to suburban Georgia, purchased her first home and, as Just Angela depicts, is busy decorating it while adjusting to her new surroundings. "My son's father's side of the family is here in Atlanta," she explained in an exclusive interview with MediaVillage. "I want my him to really know all about his father and be close to my son's father's mother, who is also like another mother to me. It became [me] wanting him to have the best upbringing possible and to know that side of the family.

"It's the perfect space for him here," she added. "He's loving it! His godfather is here. His godbrother is here. I mean it's a perfect match for him right now. And my son was about to turn five when [we] moved here, so it was time to put some roots down in the ground. I felt like the timing was right. I'm from New York and felt it was shifting and changing a bit. I felt, for myself, it just made the most sense. When I feel like it's right, it's right, so I went for it."

Simmons didn't expect finding the perfect home, one she's dubbed Chateau Simmons Russell, to be so hard. However, she's very grateful to the expert team surrounding her who handled the purchase. "I looked at quite a couple of homes," she explained. "It was kind of hard, as when I was there, I couldn't find the perfect gem. Then I finally found what worked for me. There was a little bit of time of looking, but I probably spent less time looking than most people would and when I found it, I acted fast. It had that homey feeling, was warm, and made me feel I could raise [my] child there, so that was the selling point."

Simmons is still unpacking her life, thanks to the COVID-19 pandemic. "Believe it or not, it's still in process," she said. "I have furniture still on the way. They told me it could take a while because of the pandemic. Now I realize, 'Oh, everyone was right'."

One adjustment Simmons didn't anticipate when making the switch to country living was the unexpected and uninvited visitors with which she would be contending. "The critters!" she exclaimed. "I will never adjust to [the] critters! Like they exist out there, but I'm not a fan. Making friends … I don't think so."

The front door may be firmly closed to raccoons, spiders and snakes, but as a part of Just Angela Simmons is opening it to members of her team, who will each week guide viewers through different aspects of her life. "One week we'll cover fitness, then one week it's cooking," she explained of the series' structure. "Then next week dancing, and then meditation and spirituality. I'll introduce you to someone I work with in different areas and aspects of my life. Obviously, the title is Just Angela, but so many people help me to go and grow. I'll introduce you to those forces."

One of the most important aspects of her lifestyle is being vegan. It's something she is passionate about and does highlight in the series. It's also something she's found surprisingly easy to maintain in her new surroundings. "I usually do work with some really talented vegan chefs," she admitted. "It's funny, everyone thinks it would be hard to maintain here, but no, it's not been tough at all. Honestly, they do have a vegan community here and a lot of vegan restaurants."

As for running her branded empire from Atlanta, one that includes skincare (Simmons Beauty), an activewear line to compliment Built Not Bought and a hair care line designed specifically for women of color, to name a few, this #girlboss admits, "I can pretty much run whatever I'm doing from anywhere, and travel to where I have to go. It's great and I can focus out here." She'll also continue to bring awareness to the Black maternal health crisis, and parenting through grief, along with highlighting Black entrepreneurs via aspire MKTPLC an online directory of Black-owned businesses where consumers can buy Black and shop with purpose.

"I just feel like AspireTV gets it," she shared. "We've been partners since the beginning. They have great content, and it's definitely similar to what I'm working on in the brands, and what they align themselves with. I feel like it works for what I'm doing. There's more Angela's Beauty in the works, more production with my production company, and more TV and film acting.

"I mean there are tons [of things] that I haven't even touched yet," she said in closing. "I'm just expanding and growing at a steady rate, and I'm going to continue to grow. I executive produce Just Angela and I'm an executive producer on Growing Up Hip Hop, which I helped create. You'll see a lot of other stuff I'm working on too, some really cool personal stuff."