By Jacqueline Cutler Behind the Scenes in Hollywood Archives 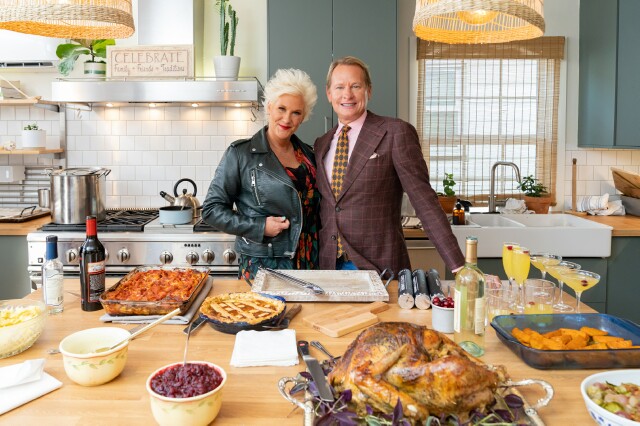 Thanksgiving has always felt like a contest along the lines of a marathon. They both require training, prep time, and long, hard hours. So, Food Network’s Battle for the Bird, streaming on discovery+, sounds like a logical show -- another food contest, but this one focused on the holiday that’s all food, all the time. The special pits two teams against each other in cooking and décor for Thanksgiving.

Chef Anne Burrell (Iron Chef America, Worst Cooks in America) and celebrity Carson Kressley (pictured at top with Burrell) judge the contest. Two groups compete, and in a lovely twist, both teams eat together and appreciate each other’s delicious dishes.

It's a fun special, and Burrell explained how it evolved during an exclusive interview with MediaVillage.

"It’s a concept I came up with based on a dinner party that I was having a few years ago, and everything that could go wrong went wrong," she recalled. "I ran out of time, and Rachael Ray was coming over for dinner. My husband and I were only dating about a month then, and we came up with this. It's based around the Super Bowl of cooking holidays -- Thanksgiving. We came up with the idea of having two teams and seeing the dynamic of people working together and putting on Thanksgiving. We gave them a budget and five hours, and they had to go to town, and you see things that happen.”

Should Battle for the Bird take flight, Burrell hopes to expand the concept to other holidays.

"Super Bowl or Valentine's Day, whatever," she suggested. "Different groups of people with all sorts of holidays. They all come with a different feel and different types of food and bring their own set of issues.”

After reviewing potential contestants, they settled on the two teams.

Team Coleman is a mom, Carmela, from Sicily; her daughter, Sabrina, and son-in-law, former NFL player Erik Coleman, a safety for the Jets, Falcons and Lions. Their main challenge was working in a rented house in Asbury Park, N.J., because their house was under construction.

Team Friendsgiving is comprised of friends Peter, Ilya and Dani. They were also in New Jersey, in Atlantic Highlands.

Each team had to pick a theme. Silly you if you thought the theme could be pilgrims and Native Americans or a big bird in a top hat.

Team Friendsgiving picked as its theme "What if Liberace had a luau?" Ilya and Peter recalled being stranded in a haunted hotel in New Orleans. They could only get Spam and pineapple, so playing off that shared experience they landed on their idea. Now, this may not bring to mind a sedate family dinner, but it does leave a lot of room for glittery fun. Their menu was bacon-wrapped turkey, stuffing, mashed potatoes and gravy, sweet potato souffle, collard greens and Cajun cake.

As both teams work, Kressley and Burrell pop by.

"The food looks and smells so good," Kressley says of Team Coleman’s Sicilian Tailgate Party Thanksgiving. "The décor? It looks like a women’s prison.”

While the kitchen should be a hub of constant motion and intoxicating scents a few hours before the meal, the Friendsgiving home was very clean and orderly, and not too much appeared to be happening. The lack of dishes in various stages worried the celebrated chef. Plus, devoting two people to decorations while one person handles every dish proves not to be a recipe for success (even with the clever use of Mardi Gras beads).

Burrell talked turkey with MediaVillage and let us in on what makes for a successful Thanksgiving spread. It starts long before the first bite and comes down to two words: plan well.

"Every year, I get my baking done ahead and my stuffing done ahead," Burrell shared. "The day of, you focus on the gravy and potatoes and turkey, and you get to be a part of Thanksgiving rather than a slave to your stove.

"Another thing people have a problem with is so much needs to be in the oven, and they run out of oven space and get freaked out," she continued. "Proper planning helps to alleviate a lot of the stress."

"When people offer to bring something, take them up on it," she said. "There is no shame in that game. When people are involved in helping to produce the whole meal, they are more excited about it.”

That organizational mindset begins with the first of the many stages of the holiday, which she refers to as "my phases of Thanksgiving." Hers starts with an orderly shopping list, divided among produce, groceries, meat and dairy, so you can go through every dish and put it in the categories. It makes it much more efficient.”

She brines her bird for three days. The night before roasting it, Burrell pats it dry and puts a homemade herb butter under the skin, to suffuse it with flavor. Burrell suggests leaving it uncovered overnight in the refrigerator.

"It makes the most delicious turkey skin," she says, likening the look of her cooked turkey to one painted by Norman Rockwell.

Burrell’s excitement about Thanksgiving is certainly evident. Like all good chefs, she’s keen to taste what others have cooked. In Battle for the Bird it's clear that Carmela is an accomplished chef, and her barley soup is a hit. The mother and daughter squabble lovingly in the kitchen. All daughters should know that they will never, ever cut vegetables right.

Over at the Friendsgiving house, drag queens greet guests at the door. Wearing gold lamé (you were expecting flannel pajamas?), they set the mood for a fun night.

One group forgets an essential Thanksgiving food, and we're not giving it away because this is, after all, a contest. Still, it's a pleasant one; no one is reduced to tears, which is always a plus on a special that has "battle" in the title. A nice touch is that the teams visit the other, and everyone eats together.

While these weren't huge dinners, they were still larger than what Burrell, who married Stuart Claxton a month ago, is planning.

"I am having Thanksgiving, just a very small, quiet one this year with my new husband," she says, then giggles. "It is so, so surreal to say, 'my husband'!"

Burrell's still chuckling as she considers her final suggestions for Thanksgiving: "Bon Appetit and gobble gobble!"

Battle for the Bird is currently streaming on discovery+.