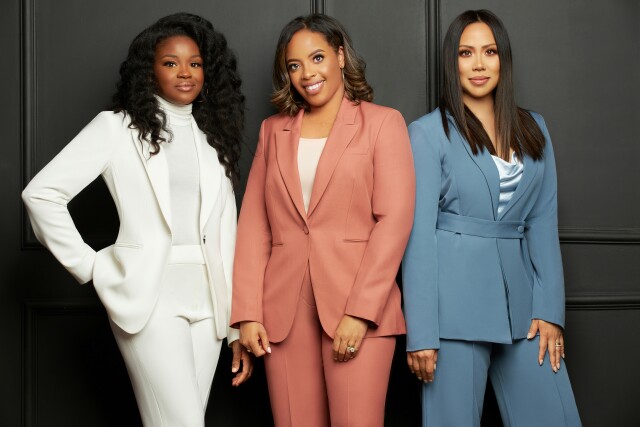 The to-do list always has at least one entry about organizing a drawer, sifting through that pile of clothing, and filing those papers. However well-intentioned that list is, it's in a notebook instantly buried on the desk under newspapers and mail. This leads to the eternal question: Why is it so difficult to get organized? And why, if you somehow manage to bring order to the drawer, donate or ditch the clothes and put each paper chronologically in a folder tucked away alphabetically, it all eventually devolves into an even bigger mess? The women of AspireTV's Chaos to Calm know the answers.

Lauren Hill, Tneisha Brown, and Varatip Johnson (who goes by "V") improve spaces by organizing them. Let's face it, most of us have too much stuff. Adding to clutter is an emotional attachment to objects, such as keeping your grandmother's favorite vase, even if you hate it.

"One of the benefits about having a professional organizing company come in is we aren't emotionally tied to your things," Johnson (pictured top and below right) noted in a Zoom conversation with Hill (top and below middle) and MediaVillage. "It's easier for us to say, 'Okay, we know for sure you want to keep this. This is a maybe. And, this? It's got to go.' So, I think that's the hardest for people -- to actually see all of their stuff out because I don't think you understand how much stuff you actually have and accumulate until you actually see it out in the open." 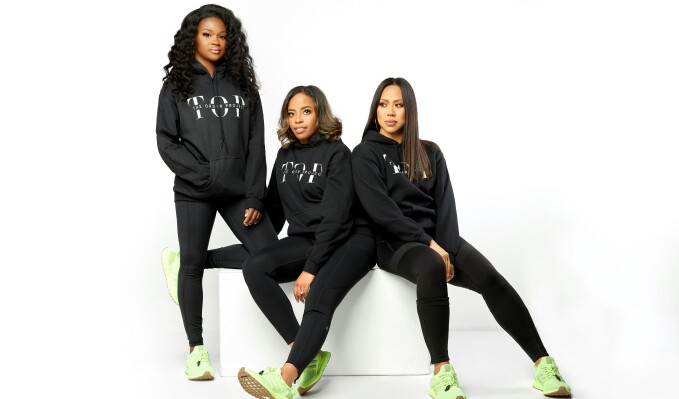 The women, whose company is The Order Project, do the organizing without the sanctimony that often accompanies those who organize professionally. They feel like three good friends who have come to the rescue. Indeed, they are old friends. Hill and Brown go back to middle school, and they also knew Johnson since they were teens in Everman, Texas, near Fort Worth.

"Tneisha and I were in our Spanish class in high school, and her binder was a hot mess express," Hill recalled. "She would be taking crumbled papers out of her backpack and trying to turn them in. I finally looked at her and said, 'We are just not doing this. This is not happening. Stop it and give me the binder, and I'll fix it.' I went and bought dividers and labeled everything, and I was like, Okay, here's your binder.'"

Now married moms with corporate backgrounds, each of them brings a different skill to the mix. Hill has always been able to walk into a room and envision how to make it more livable. Brown sees how to make it prettier, like what baskets would work with the décor. And Johnson's background as an accountant and in private equity brings the business acumen. Together, it's a winning combination that contributes to their company and the show's goal of functional organization.

AspireTV, in the top 25 African American markets, offers programming from reality series to indie films that celebrate and reflect and urban lifestyle. "I don't really think that there's anyone else of color that's out on TV right now doing what we're doing," Johnson said. "I think that (representation) really matters, too. That's something I personally didn't think about when we thought about doing the show -- how much the representation would matter. But seeing our daughters watch it and be like, 'Wow, mommy's on TV!' just [put it in] a whole new light for me. Just seeing that their moms can be busy and working, and still just doing boss things is really, really, really rewarding."

Among the jobs they tackled this season was organizing a woman's cramped closet. To her credit, she had organized it logically, but vertical space was not utilized well. In another episode, a busy mom of two was constantly buying more than she needed at the market because her pantry was in such disarray and she never knew what she needed. In another episode, San Antonio Spurs player Thaddeus Young needed help containing his sneaker collection of over 2,000 pairs.

In each case, the women followed the same method. First, they listened to the client. Then they methodically removed every item from the space being redone. Once cleared out, they cleaned it. Then, they took stock of what could be tossed, donated or kept.

Among their odder finds was a Christmas tree in the pantry and 15-year-old food. That gravy mix turned artifact had been pushed to the back of the shelf until it was forgotten. Once the space is clean, items are edited and logically stored and life becomes more manageable. Clutter has a way of sucking up energy.

"Our goal is to really have people understand that organizing is attainable," Hill said. "I think for so many people, they see other shows or other groups, and they think, 'Oh my goodness, how am I ever supposed to get that done? Or how's that ever supposed to work for me?' And what we want people to take away from this is that it is possible, right? It can be done, and it does not have to be done on a $2,000 budget."

Each job is priced individually because each job is tailored for the client, but as a rule of thumb, prices start roughly at $150 an hour for two organizers. They note that a brownstone, which they organized for La La Anthony, naturally, costs more than working on a pantry. For those not yet ready to hire the professionals, Hill advised what they can do to create more functional spaces.

"It could be just taking the small wins from the show," she suggested. "Taking a drawer at a time and saying, 'You know what? Instead of having this junk drawer, let me actually put meaning behind it.' And now it's a utility drawer because it's useful. So again, just taking those small wins and realizing that organizing is attainable; it can be done by the everyday person."

New episodes of Chaos to Calm premiere Thursdays at 8 p.m. on AspireTV.