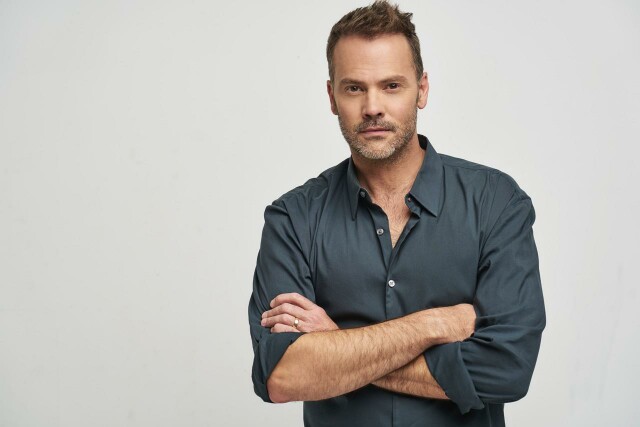 Just in time for the weekend’s holidays, Lifetime on Saturday shifts the focus of its original movies from stories about murderous moms, dastardly dads and torturous teens to something more inspirational with the premiere of My Mom's Letter from Heaven, based on true-life events.  In the film, Barry Watson stars as Connor Ash, a father left to raise his four-year-old daughter Zoe (Jordyn Ashley Olson) after his wife Libby (Cindy Busby) dies from cancer.  Before her passing, Libby writes a heartfelt letter to Zoe that Conner promises to deliver when Zoe is old enough to appreciate it.

Having been placed in Zoe's favorite children's book for safekeeping, 12 years later the widower is dealing with a rebellious teenager angry at the world and the letter has been long forgotten.  Eventually Zoe’s books are donated to charity, along with the letter, that is found by bookstore owner Maggie Malone (Karen Holness), who vows to return it to its rightful owner.

Getting to do something different and uplifting for Lifetime was a huge draw.  “I didn't know until just before we started filming that it was loosely based on a real event,” Watson tells MediaVillage in an exclusive interview.  “It’s different to what Lifetime has been doing as it's more of a feel-good-about-everything-at-the-end movie.  I think they're experimenting to see if these stories work, so you will go through a lot of tears.  Personally, it's really nice to mix it up from the normal Lifetime genre."

Watson’s last two Christmas themed Lifetime projects, The Santa Con (2014) and A Very Nutty Christmas (2018), teamed him with Melissa Joan Hart.  If you think the two were a package deal, think again.  "I'm sorry we couldn't get Melissa," he joked when I mentioned her absence from Heaven.  "I don't think she was available for this role.  But I will say the last two projects with her were so much fun, completely silly and fun.  [I] couldn't have [played] three more different characters -- a conman, a nutcracker who comes to life and now a grieving father.  This one is completely different."

Thankfully for Watson, Hallmark favorite Cindy Busby was available to play his wife Libby.  "Cindy and I did a series together a couple of years ago," he shared. "So I was happy she could play that role.  It was fun to have a couple of days where we did something different that neither of us had done before.

“I found it really helpful having that familiarity with her," he continued.  "She's someone I really respect.  Those [hospital] scenes are important as they set the tone for the rest of the movie.  If we hadn't pulled that off in the beginning, the movie wouldn't have worked. I don't know if it would have worked as well with anyone else, given the amount of time we had to shoot, so it was great Cindy was on board."

During the filming Watson found himself drawing from personal experiences; dealing with teenagers and cancer are something he’s well versed in.  "I'm a father, so some of [the angst] was like dealing with my teenaged son right now," he laughed.  "My youngest is six, and I thought, 'Okay, this is what I may possibly have to look forward to.  My wife had better not go anywhere, as I don't want to deal with this alone.'”

More seriously, Watson, who was diagnosed with Hodgkin's lymphoma in 2002 (and is in remission), drew on that experience to inform the emotionally draining hospital scenes with Busby.  "Shooting those scenes really didn't bring back a lot of bad memories," he recalled.  "I remember when I first found out I had cancer, the hardest part was seeing everyone around me struggle.  I was the one going through it, and I was more like, 'Bring it on, I'm going to beat it.'

"I did go through hard times," he added.  "But the hardest thing was watching my loved ones see me going through it.  I brought some of that to this project, but here it was about connecting with being a father losing his life partner and having to parent alone.  Being able to put myself in that place really helped me get through some of the hardest scenes I’ve have ever had.  I didn't know I had tears that could flow for 12 hours."

Watson tells me these days he's "in a good place."  Since wrapping on My Mom's Letter from Heaven he has completed Showtime's limited series The Loudest Voice (premiering June, 30).  "It's a fun piece about the rise and fall of Roger Ailes,” he said.  “I play Lachlan Murdoch, and watching Russell Crowe bring Roger to life has been a great thing to be a part of."

He's also not ruling out the possibility of a 7th Heaven reboot.  "Half of the questions I usually get are regarding reboots of certain projects,” he joked.  “You don't want to ask about a What About Brian reboot?  The [7th Heaven] cast tries to get together here and there, for a little reunion lunch, and there was talk last time but nothing serious.  If something comes about, I'll listen to it.  My hair isn't quite as long and has receded more than in my ‘20s, so maybe a Matt Camden wig?  They could sell them at Halloween -- that would be funny.”

My Mom's Letter from Heaven will be telecast Saturday, April 20 at 10 p.m. on Lifetime.