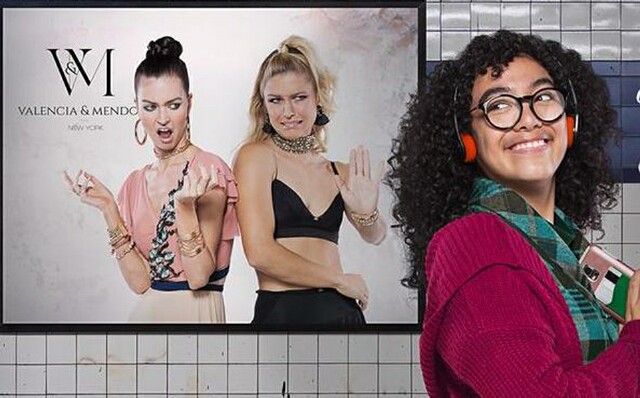 While Telemundo’s programming has focused largely on their wildly popular Super Series (multiple seasons with approximately 75 episodes each), action-packed Premium (limited) Series like Falcoand El Reclusoand reality competitions like Exatlónand the upcoming La Voz,there has been endless online chatter about Betty En NY.  The new comedy, first announced during the network’s Upfront presentation last May, is a reboot of the 1999 Colombian telenovela Yo Soy Betty, La Fea, which in turned inspired ABC’s Ugly Betty. This modernized and New York-set retelling is charming and hilarious with a star-making performance from its leading lady Elyfer Torres as the ordinary but lovable Betty.

The first series produced by Telemundo Global Studios out of the state-of-the-art Telemundo Center in Miami, Florida, which is soon to celebrate its first year of production, Telemundo continues its goal of creating more family-friendly programming to its multigenerational and bilingual audiences. Surprisingly, a fair amount of the series is in English as it does take place in New York City and realistically the gallery of characters would be multilingual as well.

Beatriz “Betty” Aurora Rincón (Torres) is a bright and kind-hearted young woman on the search for a job to help support her family and ailing father.  From being told she wasn’t “elegant” enough to become a ballet dancer to horrible luck finding romance, she has experienced constant rejection and ridicule her entire life.  She was literally handed a participation trophy at the end of her internship at a city bank, losing a job to the prettier intern despite having exceeded expectations.

Despite an impressive resume and unquestionable qualifications, Betty has lost out on job opportunity after job opportunity, forcing her to apply for an executive assistant position at V&M, a high-end fashion company in Manhattan.  After randomly helping a man avoid getting caught cheating on his fiancé, Betty soon learns that he is Armando Mendoza (Erick Elias), the newly named President of V&M, infamous for being a playboy and sleeping with the many models that work for his company.  As a token of gratitude for her loyalty in keeping his secret, Armando hires Betty to be his assistant.  Things are complicated, however, because Patricia (Sylvia Sáenz), the best friend of Armando’s fiancé Marcela (Sabrina Seara), who is also a high-ranking exec, is gunning for the same job.  Patricia and Marcela both try to sabotage Betty, but with the help of her supportive family, her new allies at V&M and her adorkable best friend Nicolás (Mauricio Garza), she persists in her efforts to rightfully earn her place among the fashion-forward and fabulous.

I was a bit skeptical when the reboot was announced last spring.  Yo Soy Betty, La Fea is considered by many (including Guinness World Records) to be the most successful telenovela in history.  For me, it was a beloved show that I’d watch with my family every night for the several years it was on the air, as well as its follow-up series Eco Moda.  Sadly, just weeks before the premiere of Betty En NY, Fernando Gaitán, the creator of Yo Soy Betty, La Fea, passed away.  This updated iteration, however, does the original series justice and has won me over, due largely to the cast’s wonderful performances and the fantastic writing and direction.

Young Elyfer Torres shines as Betty, bringing wonderful sincerity, optimism and a doe-eyed sense of wonder to the role.  Despite all the hardships that Betty has faced, she is ready and willing to do what it takes to succeed.  In the more tender moments with her trusted sidekick Nicolás, you can’t help but feel for her and want her to prevail.  I don’t think we’ve seen an actress who has charmed audiences this much since Gina Rodriguez in The CW’s Jane the Virgin.

Betty’s partner in crime, Nicolás, is played by Mauricio Garza and gives an equally endearing performance as her dorky best friend, confidant and hype man when she needs a boost of confidence.  While Nicolás is often used for comedic purposes, I commend the writers for making his character sensitive and trusting while avoiding having him fall into the mundane trope territory we’re all too familiar with.

Heartthrob and telenovela veteran Erick Elias returns to Telemundo as Armando Mendoza, the handsome playboy in over his head with his new position at V&M.  He adds charm and complexity to a role that otherwise could have been shallow and one-note.  The supporting cast, including Sylvia Sáenz as the self-serving and conniving Patricia, Sheyla Tadeo as Betty’s hilarious coworker Bertha, and Jeimy Osorio as fashionista and social-media obsessed co-worker Mariana, add to the hilarity of the series in their respective roles.

The new series takes the done-to-death “nerd gets a makeover” thing and turns it on its head, instead empowering Betty to come into her own and take what she deserves.  This charming and refreshing adaptation may be based on a 20-year-old concept but it feels very much in the moment for several reasons.