"Borgen" Returns with a Fourth Season After a Nine-Year Pause 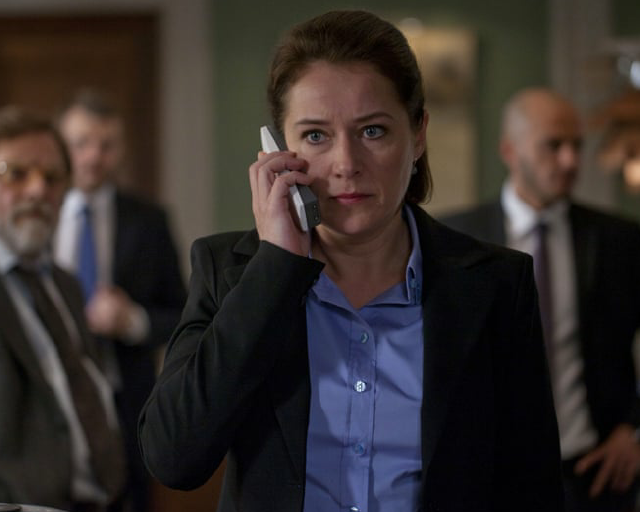 Danish political drama bursts back onto the international stage with the fourth season of Borgen (DR, Netflix), which makes a satisfying return after a nine-year hiatus. Stylized on streaming platforms as a distinct series under the title Borgen: Power & Glory -- and rightly so, since new viewers can dive in without needing background from previous seasons -- the new season follows Birgitte Nyborg (Sidse Babett Knudsen), who previously rose to become Denmark's first female prime minister, in a new role as Foreign Minister. Birgitte has aged during the series’ lengthy inter-season pause, and in a counter-trope to the family-versus-work problem plaguing women in power in other shows, she is now a single empty-nester who takes advantage of her independence to live as a workaholic guiltfree.

And she certainly keeps herself busy. When oil is discovered in Greenland (which is an autonomous territory under Denmark's rule), Birgitte finds herself caught between a dizzyingly wide array of constituencies -- climate-conscious representatives in her party, impoverished Greenlanders in search of a windfall to fund their campaign for independence, and global superpowers with security interests in the Arctic -- as she is faced with the task of crafting a policy for dealing with the new natural resource that everyone finds suitable. As she is bombarded with negative publicity from a Copenhagen news channel (led by a flailing new boss in an exhausting and somewhat superfluous side plot), Birgitte finds herself increasingly isolated in her government, and she is forced to confront the cost of a life in power.

After achieving significant international acclaim following the airing of its initial three seasons from 2010 to 2013, Borgen is just as sharp now as ever. While the series has always taken a scathing look at the personal ruin that ambition leaves in its wake, this new season strikes a sadder tone in its exploration of Birgitte’s professional and personal isolation post-divorce and post-children. In a captivating performance by Knudsen, Birgitte is at times nothing but a polished veneer and at times painfully human, desperate for connection with her son (portrayed by a charming Lucas Lynggaard Tønnesen) as she grapples with signs that her prime might be past her.

This season of Borgen is particularly strong in its unflinching treatment of the complex sociopolitical relationship between Denmark and Greenland, refusing to abstract away from difficult questions of present-day colonialism and white paternalism that hang over the oil negotiations. A powerful ensemble of Greenlandic actors (Svend Hardenberg, Nivi Pedersen, Kiki Godtfredsen, Ujarneq Fleischer), who frequently speak in the Greenlandic language onscreen, brings personal weight to the series' depiction of Greenland as a struggling yet defiant Indigenous community that is much more than the impoverished, suicide-plagued island pictured by politicians on the mainland.

Pedersen in particular is a standout in the series’ large ensemble cast in her role as a difficult-to-read Greenlandic civil servant caught in a romance with Denmark's lead negotiator (an energetic and riveting Mikkel Boe Følsgaard). (The intertwining of classical strings and Inuit throat singing in the series' opening theme, by August Fenger Janson, is a nice touch.) Additional standouts in the cast include Simon Bennebjerg as Birgitte's personal secretary and Johanne Louise Schmidt as Prime Minister Signe Kragh.

In this new season of Borgen, creator Adam Price deftly deals with the massive changes in politics and news that have occurred since 2013: the advent of "fake news" (which haunts Birgitte's attempts at crafting climate policy), the growing importance of social media in politics (which leaves Birgitte struggling to maintain her personal Instagram account), the new threat of cancel culture (which plagues Katrine Fønsmark, the head of TV1 news, in response to comments that are blown out of proportion by her employees), and even the recent invasion of Ukraine by Russia. Price is an astute observer of contemporary institutions; in his excellent 2016-2017 series Herrens Veje (produced by DR1 and available internationally on Netflix), starring Lars Mikkelsen, Price provides a detailed window into the Church of Denmark through the lens of a family of priests who inhabit a world no less political than the halls of Birgitte's Foreign Ministry in Christianborg. Here, as much as in previous seasons, Price keeps the complicated Danish multi-party parliamentary system accessible for international audiences without shying away from the nuts and bolts of policymaking, and while Borgen is not self-congratulatory in its depiction of Denmark's progressive governmental machine -- lofty climate principles often fall by the wayside in this fictionalized version of Denmark just as in the United States, for example -- it is safe to say that this very different world can serve as a bit of a respite for those tired of a two-party system.

At the end of the day, Borgen has never been a show about policy, but rather a show about man's search for power -- whether in the Foreign Minister’s chair, behind the boss' desk at TV1, or fighting for self-government in Greenland. And even after nine years, Borgen certainly still has something to say.

Ben is a playwright, composer and linguist based in New Haven, Connecticut, where he is currently pursuing a Bachelor's in Music and a Master's in Linguistics at Yale. Ben is particularly passionate about foreign television and queer representation o…