Branding with a Purpose. A Leadership Conversation with Unilever's Aline Santos 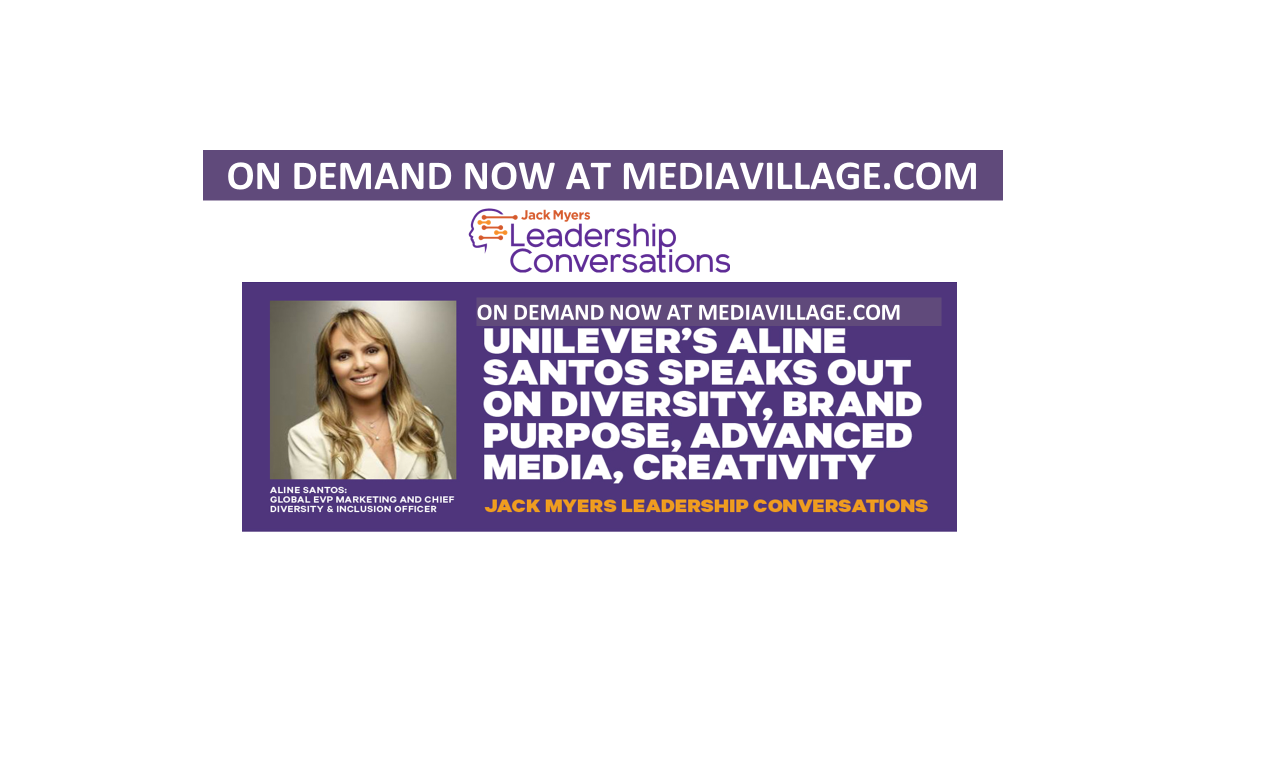 Watch Jack Myers Leadership Conversation with Unilever Global EVP Marketing and Chief Diversity and Inclusion Officer Aline Santos on-demand here. Corporations today are facing many challenges and changes in the consumer landscape but those who have been keeping a strategic, inclusive, and global perspective are poised for great success. Unilever is one of those prescient companies whose initiatives have not only raised the voices of under-represented people but also sparked global recognition for change.

Aline Santos, Global Executive Vice President Marketing and Chief Diversity and Inclusion Officer, Unilever joined the Jack Myers Leadership Conversation to share her company's ongoing successful efforts to address societal needs while also enriching the company's position in the marketplace by being in the forefront of cultural change and evolution.

Be a Good Global Citizen

When it comes to developing and implementing a plan to effect global change, companies need to be activists. Santos understands that she plays a bigger role in Unilever, as she explained, "I'm not just making the Unilever brands. We are trying to bring a new way of doing business that hopefully is going to be inspiring." To do that, new frames of references need to be introduced so that we, "break down old stereotypes," throughout the entire advertising and marketing industry. "How much we can change the shape of culture, how much we can change the way we represent people?" she noted. Activism and using your voice to push for change, as Santos stated, "In places that matter, in places in the industry that can really create a kind of a ripple effect," is the ultimate goal.

Activism is an important empowering component in society today, going beyond advocacy. "When I think about the work that I am doing at Unilever, I am not just making the Unilever brands grow but we are trying to reach a new way of doing business that is hopefully going to be inspiring to many other people," she said. "When we think about advertising, we are thinking about inspiring people with new references that are breaking the old stereotypes." Finding the activist voice and taking action in movements such as Black Lives Matter to combating domestic abuse and food insecurity requires a high degree of sincerity and authenticity to, as Santos explained, "to change the shape of culture."

Represent the Under Served and Under Represented Both Internally and Externally

Santos has been working on gender opportunities within the company for the last ten years, and "it's not been an easy journey," even though the CEO has advocated for inclusivity within the company. "Gender representation has been on the top of the agenda. But even with that it is not easy. But we got there and now we have 50/50 (in the management level) in our company that has 155,000 employees." Unilever has also looking to recruit talent from across the employment spectrum. "Representation has always been important to me, the right representation," she noted. "It is about all the dimensions. It is about, ethnicities. It is about nationalities. It is about being disabled. It is a big passion for us. We wanted to be the most desirable company to work with if you have a disability."

From a consumer perspective, she recognized early in her career that there were groups that were terribly under served. As she noted, she started her marketing career in Brazil with skincare products, "and I was noticing that although 54% of the population of Brazil is a population of color, there weren't any range of products that were specially developed for the black community." To that end, "we developed an amazing product people remember today because that was such an iconic moment… made with love and care for the black community. And it was the first time that we were doing advertising using black talent as well."

Today's troubled environment with the pandemic, protests, "the rise in food insecurity, the burden on women, the financial insecurity that we are seeing now, depression, it is really a spectacular combination of negative factors," she explained. It is all impacting human behavior, the way we interact, the way we work and the way we live. "We have been focusing too much on transactional ways of doing business. We have been too clever, too rational, too technological. Everything is tech, tech, tech," she admonished. It may be a good time, she posited, to pause and reflect to see what more we can do to, "change the paradigm of the business" to create more empathy, care, and kindness.

And yet technology has also hearkened in positive changes in the way we work, from being heard to networking. "The way we have been working using zoom technology or Microsoft Teams … has helped us," she noted. "Many women are saying that now they feel more represented because the size of the boxes in the screen are the same. When they want to say something, they can press that button with the little hand so nobody's talking on top of them."

When it comes to networking and building relationships, the playing field is suddenly more equal. "You know, men normally are much better than women in terms of networking," she began, "Although women have been getting better in the last couple of years, men are still better than women in terms of networking. But with the lock down, everybody was locked down, so there was no 'let's meet on the golf course tomorrow morning or on Saturday', no beer and watch the game. Women are finding that it's now much more equal than before."

Unilever is the company behind the Dove Real Beauty campaign, which was first launched in 2004, broke body type stereotypes and sparked a body positive movement for women. Santos is highly attuned to voicing the message so that it is authentic and affirming. "Every time we choose a script, we are choosing how we want to shape culture and it's very important that we have this consciousness," she explained. "At Unilever, 94% of the ads we tested were free from stereotypes and the 6% that were not free from stereotypes, we didn't launch. We didn't put out there."

What she found was that handling the messaging this way is, "not only good for society, it's also good for business. We have 37% more branded impact every time we have advertising that is free from stereotypes. We have 20% more purchasing intention. All the KPIs go through the roof." Companies who don't focus on the consumer this way are, she added, "still in inertia from the past."

The secret of success is clear to Santos. "The brands that are winning today, almost without exception, are brands that have their finger into the pulse of culture and changing at the same pace as culture. This is something that is really challenging and difficult - not simple to do. In the past, brands were dictating culture. Then consumers started to dictate. The (brands) that are winning are doing this with consumers at the same time."