Brant Daugherty Joins the Hallmark Family in "Mingle All the Way" 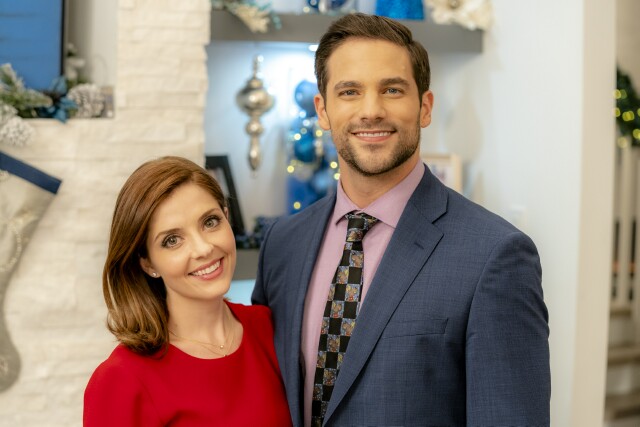 If having charm and charisma to spare are prerequisites for a Hallmark leading man, newbie Brant Daugherty might be over qualified.  The Pretty Little Liars and Dancing with the Stars alum makes his Hallmark Channel debut this weekend starring opposite network favorite Jen Lilley in Mingle All the Way, the latest movie in the network’s Countdown to Christmas programming event.  Daugherty's Hallmark debut is a distinct change from his last notable role as Luke Sawyer in the R-rated feature film 50 Shades Freed, and an opportunity the actor is delighted to have been given.  "The movie came in as an offer, which was great, so I guess someone had seen something that I had worked on and liked me enough, and for that I am flattered,” Daugherty explained during an exclusive interview with MediaVillage.  “I didn't realize how much of a club it was, but I’m honored and happy to be a part of Hallmark.

“It's a fun process and a really fun movie,” he continued.  “I hope everyone enjoys it.  I saw the promo for Eloise Mumford's movie A Veteran's Christmas and thought, 'Well I am in good company.'  [Mumford is another alum of the 50 Shades franchise].  My Hallmark experience is that they are very open and inclusive."

Mingle All the Wayintroduces Hallmarkies to Molly Hoffman (Lilley), a go-getting entrepreneur whose platonic networking app ‘Mingle All the Way’ has just been released.  Eager to interest investors, Molly is forced by one to practice what she preaches by signing up for the app to see if it really works.  Enter Jeff Scanlon (Daugherty), an ambitious advertising executive in need of a holiday party companion to impress his boss who has also downloaded the app.  With a 94% match rate, by algorithm standards, Molly is ideal.  But the two have met before -- twice – and their previous encounters did not go well.  Despite a mutual animosity, the couple agrees to give their platonic match a chance and help one another over the holidays -- her by impressing his boss, him by impressing her mother (played by Lindsay Wagner), all while avoiding mistletoe at all costs.

Daugherty joked that there was "no pressure, right?" signing on to do a film that stars Lilley, was brought to the network by Lilley and was also executive produced by her.  "Jen was great, and to her credit she kept the producer side away from the actor side," he explained.  "I never really saw her as 'Jen the Producer' and I really appreciated that.  She was always right there alongside me as an actress.  I knew she had a lot to do with bringing the script to the network and getting it made, and I'm glad she had me on board.

"It's funny when you are hired for something like this," he continued.  "It's always about the chemistry going into [these movies], so the first meeting is always interesting as you are sounding each other out.  A trick I like to employ is finding something about that person I can immediately love; be it their smile, personality or the way they talk about their children.  She just exuded personality and was so fun that we had an instantaneous rapport."

When it came to turning on the charm for his character, Daugherty's performance appears effortless. "I really appreciate that," he modestly responded when I pointed that out.  "[Jeff] read that way in the script, so it was easy.  I see a lot of me in Jeff; in that he's very work-focused, if almost to a fault, and that is something I really tried connecting to.  I get that way and tend to hermit myself by reading scripts and working -- and then I realize I need to have a social life also. However, It does prove difficult at times when you are filming on location."

Daugherty, who became engaged to actress Kimberly Hidalgo this past February and plans to marry next summer, was delighted she could join him on location. "We have a standing agreement," he explained.  "If one of us is on location we try our best to bring the other out, so she came up for a few days.  It was nice as we started celebrating Christmas in October, which was a little odd, but Kim gave Jen and I the seal of approval, so that was good to hear."

Next year will be a busy one for Daugherty and his fiancé.  In addition to planning their wedding, the couple recently sold a script they co-wrote as a vehicle for the two of them to star in together.  It is currently being shopped around, and Daugherty hopes it will land at Hallmark.  "If Hallmark comes knocking, I will welcome that visit as I am sincerely happy to be here," he laughed.

As for Christmas this year, he's figuring things out.  "It's my first Christmas as an engaged man," he shared.  "Kim and I just purchased a house together, so it's our first Christmas as a new family.  We're starting a bunch of new traditions, so this is probably the most Christmassy I’ve felt in a long time.  As a young bachelor Christmas kind of falls to the wayside, so I’m excited to be doing a tree, hanging lights and having a little viewing party for Mingle All the Way where we'll be live tweeting and posting to Instagram.  I hope everyone can join us there as I've seen that the Hallmark fans, to their credit, are very vocal on social media and I appreciate that.”

One thing's for sure, this year there will be mistletoe.  "That's something I've never had," he laughed in closing.  "This year we'll start and if I get a few kisses from my fiancé it'll be worth it.  I may have no luck without it."

Mingle All the Waywill be telecast Saturday, December 1 at 8 p.m. on Hallmark Channel as part of its Countdown to Christmas programming event.