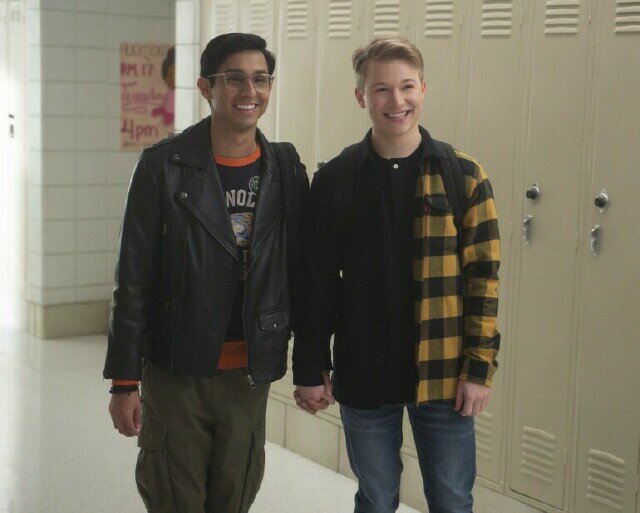 Let's go, Wildcats! High School Musical: The Musical: The Series, the beloved musical dramedy based on the Disney Channel/Disney+ franchise, returned for its second season last month after delays due to the COVID-19 pandemic. Last week the mockumentary-style series, led by Olivia Rodrigo, Joshua Bassett, Matt Cornett, Sofia Wylie, Frankie Rodriguez and Joe Serafini, celebrated the release of its fifth episode, "The Quinceñearo," with a virtual event streamed live from Los Angeles featuring the stars of the series playing trivia, an advanced screening of the episode, a Q&A and special musical performances.

"The Quinceñearo" takes a pause from this season's main storyline of the East High students in rehearsals for Beauty and the Beast to compete with the larger budget productions at their rival school North High. Instead, it shifts gears to our favorite little choreographer Carlos, played by the adorable Frankie Rodriguez (pictured at top left, with Joe Serafini), who is eager to commemorate his 15th birthday but has no plans to celebrate. Enter his boyfriend Seb. (#SebLos. If you know, you know!) He gathers all their friends to put together an impromptu Quinceñearo for Carlos. Typically, a Quinceñeara is a traditional 15th birthday celebration for young Latinas to celebrate going into young adulthood, much like a Bat Mitzvah. 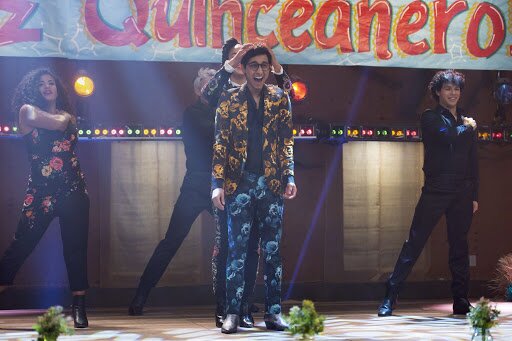 "I think it's really special that this episode is coming out during Pride," said executive producer and showrunner Tim Federle before the screening began. "It's important not just to be who you are but celebrate who you are out loud."

Once they finally lure Carlos to Seb's family barn, which they've decked out in twinkling lights, decorations and a big sign that reads "Feliz Quinceñearo," the celebration begins. Gina (Sofia Wylie) pays a stunning tribute to Carlos by reinterpreting a dance he posted to Instagram at 13 years old, with some fierce Latin-inspired singing and choreography. Followed by one of the sweetest scenes I've ever laid eyes on, Seb is at a gorgeous white grand piano to play and sing a song to his boyfriend and birthday boy Carlos, but before he does, he says "You're not just my boyfriend, you're my hero …" and he plays the first notes of "The Climb" by Miley Cyrus, beautifully belting out his rendition of the song. All I could think was, "get yourself someone to look at you the way that Carlos looks at Seb."

Is it odd to simply call this show "adorable?" Because it is. The way the relationship between Carlos and Seb is portrayed is just so wholesome and lovely. In this idealized, fairy tale-like world at East High, everyone is loving, accepting and caring of one another. Not every LGBTQ+ story has to be filled with conflict, heartache and struggle, because not every LGBTQ+ experience is made of that! Sometimes everyone is accepting and that's what this show and episode beautifully celebrates.

Following the screening of the episode, a Q&A with Frankie Rodriguez, Joe Serafini and episode writer/producer Emilia Serrano was moderated by Monica Trasandes, Director of Spanish Language and Latinx Media and Representation at GLAAD. When asked about the importance of representation on screen, Frankie said, "There were not a lot of people who looked and acted like me in film and television. The fact that I'm here now and we can get to the representation we didn't get to see is just the best."

After the Q&A, Frankie and Joe reprised the performance of "The Climb," but this time as a duet, complete with gorgeous harmonies and Joe playing along at the piano. Frankie was then presented with a silver Liberace-esque candelabra (a nod to his portrayal of Lumiere in this season's in-show production of Beauty and the Beast), a sparkling pair of party shoes and a stunning Quinceñearo tiara. That was followed by an incredible performance of the HSM classic "We're All In This Together" from Mariachi Arcoiris (Rainbow Mariachi), aptly named as they are the world's first LGBTQ+ mariachi band.

I'd be lying if I said I wasn't tearing up and just gushing over this episode. As a queer Latinx kid, it touched my heart to see this beautiful representation on TV. I wish this existed when I was a closeted teen, but I'm glad I can witness it now and that all the queer kids out there can, too.