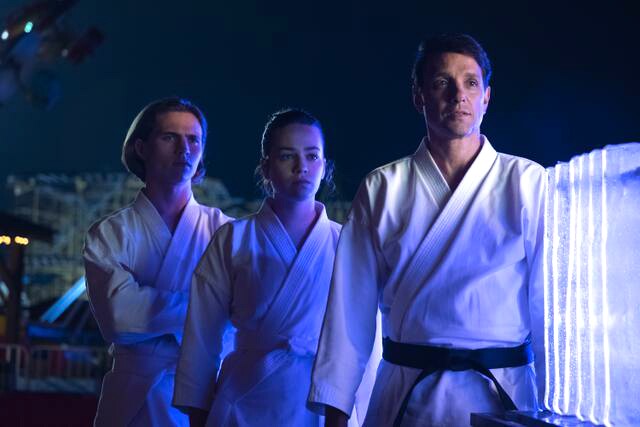 Cobra Kaiis a special kind of show, not just because of its legendary American pop culture roots, but also because of its flawless execution as a modern-day television continuation of the original motion picture stories. Now, the series -- which was once a YouTube Original -- has moved to Netflix, where its third season already lives, and its fourth has already been greenlit. What makes this show so damn good, especially when it's so cheesy at times that my lactose intolerance flares up? There are many reasons, and I'm going to get into all of them, but first we're going to talk about how Cobra Kai straight crane-kicks that TV-14 rating every chance it gets.

For those who don't know, Cobra Kai picked up exactly where the Karate Kidmovies left off, only it was 2018 at the time. Danny LaRusso (the ageless Ralph Macchio, pictured top right) had become a successful owner of a chain of car dealerships, while his childhood nemesis Johnny Lawrence (William Zabka) had become a bitter drunk. Fast forward two seasons, and Johnny's both risen to local prominence through the resurrection of his old dojo, the titular Cobra Kai, and fallen from it once again after the subsequent teenaged "karate riot" that took place between his students and the pupils of the also resurrected Miyagi-Do dojo run by LaRusso during the season two finale.

Messiness ensued as various soap opera-level events took place: Johnny's old sensei/tormentor John Kreese (Martin Kove) returned and somehow took Cobra Kai back from him, LaRusso unknowingly mentored Johnny's son Robby (Tanner Buchanan), and Robby ended ups kicking Miguel (Xolo Maridueña), Johnny's protege, over a second story railing during the aforementioned karate riot which put him in a coma and potentially paralyzed him for life -- assuming, of course, that he even lives. This is essentially where the third season begins.

You know, normally when a heavy hitter like Netflix buys a pre-existing I.P. there's a jump in quality that would reflect the assumed increase in budget and resources that a show like this would probably see. However, for Cobra Kai that's not really the case … in a good way. Cobrawas already holding itself to an unexpectedly high standard long before Netflix got involved. Yes, the stunt work is phenomenal, and the connectivity between the current series and its film-born predecessors is beyond gratifying, but the truest selling point of this show is its attitude about itself; that is, its self-awareness.

Think about it … everything that's happening is objectively ridiculous on the surface. These grown men have, as Danny's wife Amanda (Courtney Henggeler) puts it, "warring karate dojos." That even sounds stupid. But it works, because everyone that isn't a sensei or a pupil seems to know how dumb this entire feud is, especially when the hammer of real-world consequences begins to drop.

Now combine that with the writers making sure that these kids talk like real people, cusses and all. I haven't heard a single f-bomb yet, but "shit" and "bullshit" are all over the place. Cobra's team has done a top-notch job of never actually breaking into TV-MA territory while still providing a tone that feels unrestricted by silly things like ratings. Remember, the series is constantly doubling down on its '80s movie-style DNA, and back then nobody was P.C., karate fights solved everything, and mini-mall martial arts was influential enough to guarantee a successful adult life if you won the big tournament.

This is why it all works -- because the series leans into the outlandishness of a bunch of kids seeing the presence of martial arts as a game changer in their lives, the same way LaRusso and Lawrence have for so long and continue to do. This passion of theirs is what makes everything a little less silly, because LaRusso's not fighting for himself, he's fighting for Reseda. It's the same way that Johnny's fighting to be a better person and escape the trauma that he was taught by Kreese (who's own personal trauma is made more clear via pre-Karate Kidflashbacks this season), or how Hawk (Jacob Bertrand) is fighting the ghost of who he used to be (which is why he beefs with his old best friend Demetri, who now represents what Hawk sees as his past weakness).

So, now that the series has moved to Netflix, what does that mean for Cobra Kai? Having already seen the third season, I can tell you that the show never really takes its foot off the pedal. Conflict is the heart of drama, and it's there at every turn. At the top of season three, Robby's on the run for almost murdering Miguel; Miguel's in a coma having karate dreams; the entire town has turned on the LaRusso family; Johnny's on a woe-is-me bender, having lost his dojo and students, and Kreese is recruiting wayward high school students like an evil version of Power Rangers' Zordon.

Needless to say there is a lot going on. The real question is what are they going to do when they run out of original movie footage to use in flashbacks? I don't know, but I do know that we're definitely getting at least one more season to find out, and so far, Cobra Kai has yet to disappoint.