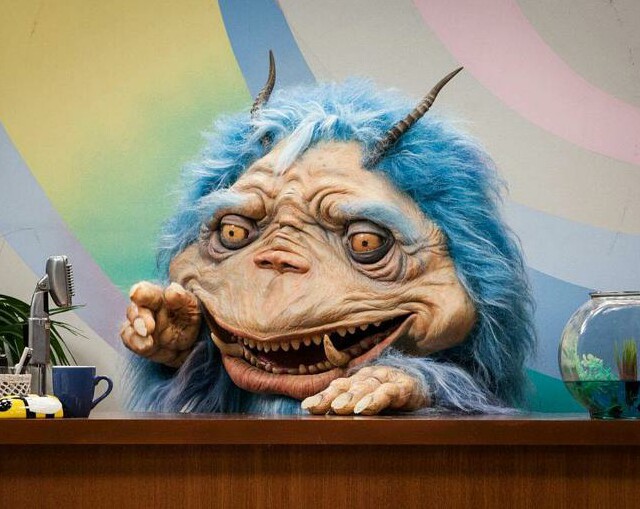 Comedy Central has continued its ongoing move into late night with a Sunday night "talk show" that has to be seen to be believed.  It's called The Gorburger Show -- and it is unlike anything else on television.  It bears no resemblance to any other talk show anywhere.  There is no house band.  There is no opening monologue.  And there is no guarantee that celebrity guests will survive intact -- or survive at all.  Oh, and the host is a bloodthirsty alien with a taste for human flesh and smooth jazz.

The opening of every episode (so far) is the same:  A Japanese variety show is filming in front of a live studio audience when Gorburger – the tall, fuzzy, giant-faced blue alien for which the show is named – crashes the party in spectacular fashion.  Similar to the way that every episode of The Eric Andre Show opens with Andre violently destroying the set of his own show, Gorburger opens to the aforementioned alien violently crashing the title sequence of said variety show and proceeding to dismember and eat a few people on the set in a gory display of ‘90s-era special effects.  It’s a wildly offbeat approach that’s right up there with some of TV’s funniest, most underappreciated shows.  Given that this was originally an online series on Funny on Die, it’s not really that surprising.

Gorburger feels like a combination of some of my favorite offbeat shows -- Space Ghost: Coast to Coast, Comedy Bang Bang!, The Eric Andre Show and Mister Roger’s Neighborhood.  Its got a ridiculous fictional host, nonsensical content, comedy-cloaked commentaries, educational vignettes and famous guests; all of which combine to create a one-of-a-kind experience.

Ugly and fuzzy blue alien Gorburger (voiced by T.J. Miller of Silicon Valley) is unstoppably hilarious.  His questions and comments are from the standpoint of someone who genuinely doesn’t know much about human beings and their culture, which makes his vignettes seem like he’s educating himself as much as he is the audience.  It comes off very Mister Roger’s-y, and the nostalgia it provides pleasantly adds to the other familiar elements of the show.  It’s also worth noting that the whole thing looks like it has been put through a VHS-style filter and came out with a vaguely ‘80s pastel color scheme.

They really go for broke when it comes to getting a laugh on this show.  I imagine a conversation in the writers’ room that went something like, “What if Gorburger kidnapped Kenny G and forced him to play smooth jazz under the threat of death?” “Perfect! Write it.”  That’s probably pretty accurate seeing as that’s an actual bit from the show.  They also have a ton of special guests appear in one way or another.  The first three episodes included guest stints or cameos by Reggie Watts, Andy Dick, Dr. Drew, Tig Notaro and yes, Kenny G.

Comedian Notaro was Gorburger’s guest in the most recent episode, and her deadpan delivery and in-on-the-joke performance was the perfect juxtaposition to Gorburger’s overall outrageousness.  T.J. Miller’s voice is arguably a bigger star than he is (see: Cloverfield), and his delivery of the buffoonish alien’s witty quips (coupled with his seasoned comedic timing) is priceless.  That’s saying a lot, considering the visuals alone seem like the kind of thing one would see during a bad acid trip.  He also handles every guest like a pro, asking them hard-hitting questions like “Tonsillitis, conjunctivitis or Christopher Titus?” or making them sit in “The Tasting Chair.”  (Dr. Drew’s time there was particularly nauseating.)  This makes every single episode a good time, even though the guest often dies at the end. Spoiler alert: Notaro bit the dust by falling into a wood chipper. Yikes.

These days you can't flip past a channel or peruse a streaming service without seeing some new show that revolves around heavy social issues and serious subject matter and, even though that type of stuff is gripping and entertaining in its own right and is the foundation of Peak TV, people need to laugh. The Gorburger Showcaters to that need, and then some.

The Gorburger Show is telecast Sunday nights at midnight on Comedy Central.