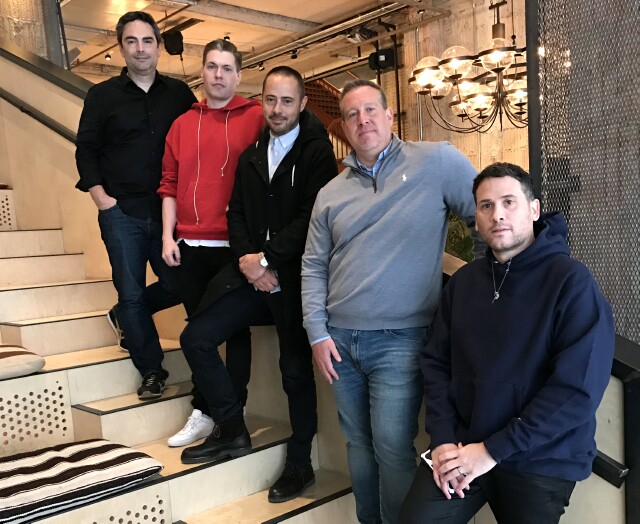 Complex Networks, making its debut as an Upfront event player last Thursday, existed first as a bi-monthly magazine 15 years ago, then became a Web site. In recent years, the company became a short-form digital video programmer, whose six brands -- Complex, First We Feast, RatedRed, Pigeons & Planes, Collider and Sole Collector, all directed at men 18-24 -- reach their audience through YouTube, mobile (Verizon's go90 service) and social media. Verizon now owns Complex under a joint venture with Hearst and has started an effort to expand distribution through smart TV sets and smart TV-making devices. RatedRed, the Complex brand engaged with "heartland Millennials" according to channel leader Todd Schwarzchild, is now playing on Roku and Apple TV.

Venue:  The basement level of Neuehouse Madison Square in New York City on 110 E. 25th St. off Park Ave South.  A candidate for most unusual Upfront space of 2017 -- part restaurant, part meeting rooms and part hangout for the hip set on the street level, with a screening room in the basement. The lobby outside the screening room is part library (lined with bookcases on either side) and a mini-dining space where breakfast was served buffet style.  Some areas deploy stark lighting that can be a bit too dark for some tastes. Overall, the atmosphere is cool and casual for networking. I first came here in March for the launch of Walter Presents, a smart TV-distributed showcase of curated scripted drama series from Europe and Latin America.  Grade: 3 Jacks

Presentation:  Get in our sandbox, because we're the new outlet you want for a tough-to-reach young male crowd.  CEO Rich Antoniello delivered that declaration throughout his opening remarks. "We make culture pop," he asserted. "Our conviction is that content isn't king, passion points are. We're becoming the today and tomorrow of youth culture.  We don't present conversation. We start conversations, then expand them in an organic way, all the way through.”  Stats to back that thinking up: Complex's original content so far attracts about 810 million views a month worldwide, among 54 million unique viewers a month here in the U.S. and 100 million globally. Antoniello expects to break one billion views per month by mid-year. "That's pretty big, and we still have a long way to go," added Complex Co-Founder and Chief Brand and Creative Officer Marc Ecko. Grade: 3.5 Jacks  (Pictured at top, left to right: Shawn Strickland, Executive Vice President Distribution and Business Affairs; Noah Callahan-Bever, Chief Content Officer; Moksha Fitzgibbons, Chief Brand Partnerships; Antoniello, and Ecko.)

News:  With 15 first-run series playing now, Complex will add at least 25 more series to its output by the end of 2017.  Most will be short-form unscripted and run six-nine minutes per episode, but a growing number will be scripted, and several will take the long-form route, as in 22 minutes or more per installment. Play By Play, set to premiere on RatedRed this summer, will be both scripted and long-form, set in the 1990s and focused on the travails of a high-school football kicker. Other new unscripted attractions coming soon: The Neighborhood (celebrities return to where they grew up), Complex Closets (prized possessions of the famous revealed), A Little Too Farr (all-access look at the country music scene) and Throttle Rockets (making all-terrain vehicles).  QB1: Beyond The Lights, a current RatedRed program from Friday Night Lights director Peter Berg, will come back for two more seasons. Grade: 3.5 Jacks

Host:  Antoniello, Ecko and their associates made their case in short, snappy, to-the-point segments. No one was uncomfortable at this podium. Grade: 3 Jacks

Star Time:  This mid-morning event was celebrity and performance-free, so no Jacks score.

Cuisine:  Several inventive variations on familiar breakfast eats, served after the presentation. Best eats: lemon-flavored ricotta pancakes (topped with berries) and egg white bites with turkey sausage. Worst eat: the bagels (bland even when topped with something). Grade: 2.5 Jacks (Note:  Cuisine ratings do not figure in the overall Jacks score.)

Data Insight:  For the first three months of 2017, Complex series have attracted more than two billion video views through its roster of platforms. Two of the most popular series -- Hot Ones on Complex and Sneaker Shopping for Sole Collector -- have surpassed 100 million views on YouTube alone. Grade: 2.5 Jacks

Innovative Opportunity:  Brand participation in or partnerships with ComplexCon, a two-day festival taking place November 4-5 in Long Beach, California.  A mix of concerts, technology exhibits and pop culture attractions, ComplexCon attracted more than 35,000 people and 34 performers to its first time out last November.  More than $7 million in merchandise was sold during the 2016 event.  On a year-round basis, Complex offers a range of brand partnership strategies. Current clients include Adidas, McDonald's and A+E Networks.  Grade: 3 Jacks

Overall Grade:  3 Jacks Impressive opening act for a newcomer to this scene. Extremely clear this organization sees 2017 as the year to pop into second gear in both content making and distribution among its demographic.