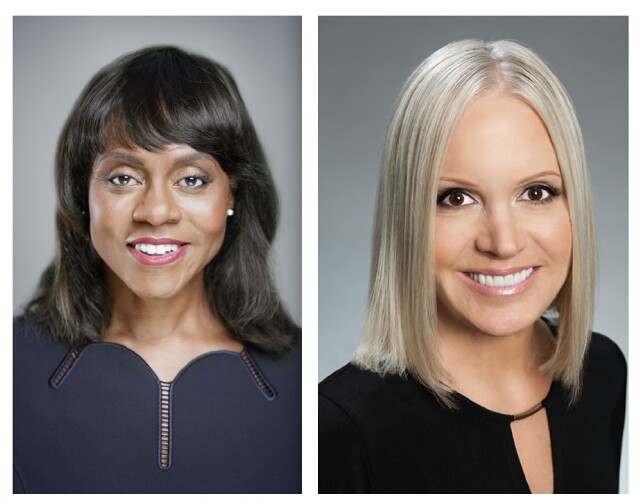 Crown Media Family Networks President and CEO Wonya Lucas and Executive Vice President, Programming Michelle Vicary were the main attraction yesterday during their company's presentation in the Winter 2021 Virtual Television Critics Association tour. They were on hand to discuss recent and upcoming programming on Hallmark Channel and Hallmark Movies & Mysteries, which in recent months has seen significant increases in diversity and inclusion in front of and behind the camera.

The event marked the press' formal introduction to Lucas (pictured at top left), who joined Crown Media last year. "I'm a brand person through and through and I've had the great fortune of having worked for some of the most iconic brands in the media industry," she said by way of introduction. "I consider it an honor to now lead the iconic Hallmark media brands. This company has had tremendous success, and I see my role as continuing to evolve our brand, to fully embrace the breadth and depth of the Hallmark logo brand, which includes a sense of optimism and hope and, of course, love.

"Now, these are universal themes that are inherently inclusive and available to all people," she continued. "Before I arrived, we had begun to expand our brand inclusiveness in front of and behind the camera. I'm proud of the progress this team is making to expand diversity in our programming. It is nothing short of seismic. The significant achievements made in the D&I space in 2020 laid the groundwork for us to branch out in our storytelling to approach the complexity of what it means to love and be a family in a more authentic, varied and inclusive way. We will continue to strive to defy common stereotypes and give our characters more depth and dimension; in short, to more broadly represent the human condition. What a difference a year makes."

It went without saying that Lucas joined Crown Media under the most trying of circumstances. "You might say that the timing wasn't optimal," she told reporters. "After all, who imagines starting their dream job amid a pandemic where your entire workforce is working remotely? Although certainly not ideal, I had the opportunity to see the drive, vision and core values of this company under the toughest of circumstances, and to truly appreciate the resilience, creativity and collaborative spirit of the team.

"2020 presented considerable challenges for our programming team given the industry-wide production shutdowns," she continued. "But with Michelle at the helm, this team navigated an accelerated schedule to deliver 66 original movies, including a slate of 40 new original holiday movies, across Hallmark Channel and Hallmark Movies & Mysteries. They also developed and produced new seasons of Hallmark Channel's scripted series When Calls the Heart, Good Witch and Chesapeake Shores, all of which roll out this year. And they reimagined the network's daily lifestyle program Home and Family, with our talent shooting all the cooking and crafting and decorating segments from their homes."

Lucas spoke about Hallmark's continued ratings success and its robust presence across multiple social platforms including Facebook, Instagram, Twitter and Pinterest. Not surprisingly, however, it was the company's recent efforts to broaden its scope concerning inclusivity, representation and diversity via broader storytelling that became the focus of the session.

"The Hallmark brand is inclusive," Lucas asserted. "All you have to do is walk into a Hallmark store and you can see stories, you can see cards for the LGBTQ+ community, for the African American community, and so on and so forth. We're really seeking to make sure that everyone [sees] themselves in our movies because whether we're talking to consumers of different races and ethnicities, even generationally, there are common themes and things they're looking for in our movies. So, what we're doing moving forward is adding a little more authenticity and complexity to the storylines."

"I'm so proud of that," Vicary (pictured top right) added, making a special reference to the success of The Christmas House this past holiday season, which featured a loving gay couple among its core characters. (In a first for Hallmark, the movie was recently nominated for a GLAAD Award.) "It was a multi-generational story, really beautiful, funny and heartwarming," she said of the movie. "I'm also really excited about our first gay lead [character] coming up in Mix Up in the Mediterranean. Jeremy Jordan plays twins; one is gay one is straight, and through a comedy of errors they switch places. We're super excited for that movie."

As for the naysayers who were initially unhappy with such changes in the network's content, Lucas said, "I believe that people have moved on, and based on our ratings success this holiday season, are watching us and leaning into what we're doing on both of our networks. I can only look at where we are today and really be excited about where we're going.

"An example near and dear to my heart is Christmas Comes Twice," she continued. "The lead character is an astrophysicist, and as a former engineer I loved seeing a strong biracial woman who is a scientist. That [was] something new, realistic and fresh for us."

Asked about the plethora of programming competitors that are fighting for a share of Hallmark's hugely successful Christmas success, Lucas replied, "Hallmark has been in the Christmas business well before there was a network, whether it's ornaments or cards, for 100 years. It makes sense we would lean into Christmas, and we would own Christmas because it's inherently a part of our brand. It's who we are. That's one of the reasons why the line extensions in consumer products, and all the things that the team has done, make a lot of sense."