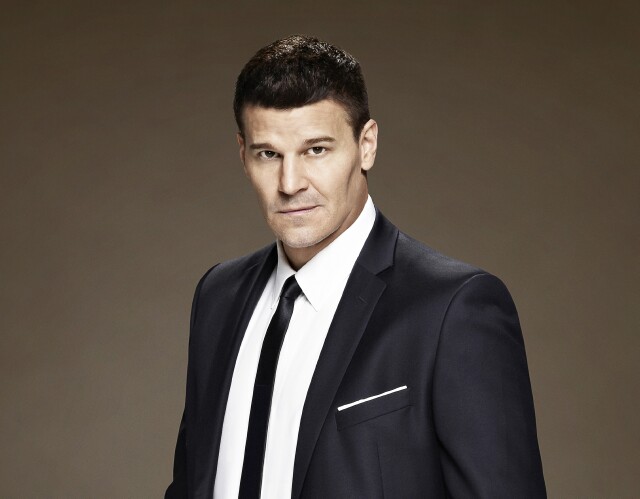 Television says goodbye tonight to another long-running series when Fox’s Bones ends its 12-year-run. Though it never achieved juggernaut ratings, this procedural crime drama was one of the first in the genre to stick after the historic success of CBS’ CSI franchise had every network scrambling to find similar shows of their own. Bones had legions of loyal fans (a.k.a. Boneheads) consistently tuning in to see the weekly adventures of crime-solving forensic anthropologist Dr. Temperance "Bones" Brennan (Emily Deschanel) and F.B.I. Special Agent Seeley Booth (David Boreanaz).  Notably, the series signs off with the distinction of being the longest-running drama in Fox’ history. It was also known as the network's most reliable utility player, frequently called upon to replace ailing shows and rarely remaining on the same night or at the same time for more than a year or two in a row.

Series star Boreanaz was no stranger to playing enduring characters when he signed on for Bones in 2005. The actor had just completed an eight-year stint playing the terminally tortured, cursed vampire Angelus on the classic Buffy The Vampire Slayer (currently celebrating its 20th anniversary) and its spin-off Angel.

Following the cancellation in 2004 of Angel, Boreanaz was looking for something completely different and he found that with Bones, although the witty banter between Booth and Bones often harkened to his two previous Joss Whedon-created shows.  In 2005, while promoting the launch of Bones, Boreanaz had fun with those comparisons when he joked with reporters, “On Angel, the banter really was with a bunch of demons. On Buffy it was with Sarah [Michelle Gellar], but [that] was more an intense, brooding kind of relationship and, well, I can actually go to bed with this one.”

He was referring to Dr, Brennan, and six seasons later Agent Booth would do just that when he and Bones put an end to their sexual tension and sealed the deal, something Boreanaz also foresaw in that 2005 interview.  “I think with these two characters, the potential for their personal lives entering into their professional lives is dynamic,” he correctly predicted.  The union would result in a child and eventually a wedding in the series’ ninth season.

For Boreanaz, there’s a lot to take away from playing a character for 12 years whom he originally described as, “a simple guy who liked a cheeseburger.”  He directed the series finale and was thrilled to have been able to make that a family affair. “I was able to get them all in the series finale,” he told me recently during an interview. “My dad, my mom, my son, my daughter and [wife] Jaime, so the whole family is in it.  Dad [a real-life newsman] does a news reporting kind of thing that’s a part of the storyline, which is great.

“But for me the biggest take away is really the hard work,” he continued. “That’s the essence of what it really takes to have all these moments and be blessed and humbled.”

Both Boreanaz and Deschanel would eventually become producers on the series, making it a completely collaborative effort and one he admits to having been lucky to experience. “Our jobs as actors is to excite writers and to be able to do that,” he explained. “To find the moment and bring it to heart, change lines, rewrite scenes and bring ideas. To me that’s what it’s really all about.  It’s a collaboration and not [being] stressed on a show where you’re being told what to do.”

Boreanaz couldn’t help but recall the series’ classic 200th episode back in 2014 -- another he had the pleasure of directing.  “I loved that episode because it was a very special,” he said. “I loved going back and doing that Hitchcock kind of homage to old Hollywood.  As a director I was able to do things with cameras that really challenged me, and for the series finale I found some great lenses to use and explore [things] with from a director’s prospective.”

With the series done, Boreanaz now finds himself in an enviable position career wise. He’s not ruling out another 12-year stint on another series.  “I’m in a position now where I don’t feel like I need to chase anything in my life,” he continued. “So whatever happens, happens. For me it’s about finding something that would fit with me and with what I would like to do.  Whether it’s in developing something, being a part of something, directing a show or a pilot, for me it really depends on where I’m at and not being pressed to go out and chase things right now.”

The self-confessed “worker” intends to utilize the numerous talents he has developed during Bones on his next vehicle.  “I’m looking towards producing and creating, directing, acting,” he said. “I’m a triple threat. I have a good track record and I’ve really paid the price being down on the front in the war room and knowing how shoot a show and what it takes.  I know budgets and above and below cost, so we’ll see.”

Just don’t count on a Buffy re-boot. “No never, that’s not happening,” he said. “I have no problem with the cult audience at all and I would totally get back into that genre because I love that, but I’m not a big reunion guy and not one to do those types of things. There’s no real reason for me to get involved in that right now. If someone asked me point blank, I’d say, “It’s a no for me.”

The series finale of Bones will be telecast on Tuesday, March 28 at 9 p.m. on Fox.