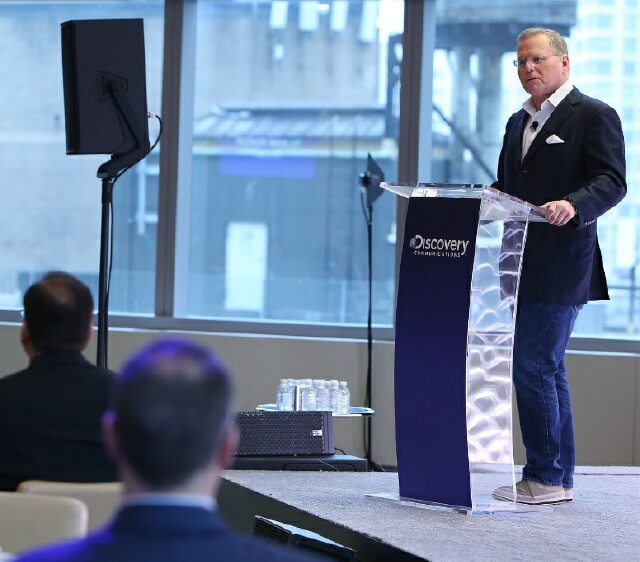 Venue:  10 At the Park, located on the 10th floor of the Time Warner Center at Columbus Circle. As breakfast was served up outside the main room, demonstrations across from the buffet table showcased how various Discovery networks reach viewers of smart TV-connected devices (Roku, Amazon Fire TV), skinny bundles (DirecTVNow) and videogame player bundle PlayStation Vue. One demo space featured Discovery's virtual reality content, accessed via headgear, while another was reserved for Alexa, Amazon's voice-response device. Inside the main room, a white stage at one side was reserved for the presentation, and everyone at their seats had a clear view of Central Park. Grade: 3.5 Jacks

Presentation:  There's a new wrinkle in Discovery's message, as given by President and CEO David Zaslav (pictured at top) and his colleagues. It's not enough to be a dominant non-fiction content player in output and viewership worldwide; Discovery is out for dominance in availability on any video platform. Public acceptance of smart TVs, devices like Roku and Amazon Fire TV, smartphones and tablets has "changed the culture of our company," Zaslav said. "We have to do IP on all platforms." Whereas in previous presentations Zaslav's remarks would have been followed by a download of data, announcements and show clips arranged by each network, Discovery instead announced a set of new media initiatives -- the expansion of Go applications for each network on smart TV sets and devices, another app customized for Amazon Fire TV, offering more than 500 hours of TLC's Say Yes to the Dress and related programs, and development of Snapchat services, including one supplementing Eurosport's coverage of the 2018 Winter Olympics. Early reaction to the Go apps since their launch last August has been above expectations, with 22 percent growth month-over-month, added Discovery Chief Commercial Officer Paul Guyardo. He expects those apps, a number of which will develop original content, will be in 116 million connected devices by the end of the year.  As a result, advertising pitches to clients will become as much multi-platform as multi-channel. Grade: 3.5 Jacks

News:  Manhunt: Unibomber, Discovery's first attempt at a scripted anthology series (focusing on an infamous U.S. criminal each year) will debut August 1, following the conclusion of Shark Week (with Olympic swimming gold medalist Michael Phelps featured on opening night of that annual event). New primetime series there include Darkness (contestants journey through a remote location with no light to guide them). TLC will offer This is Life ... Live, a four-night miniseries later this month in which milestone moments around the country will be presented live and uncensored.  Look for Say Yes and 90-Day Fiance spinoff series later this year, followed in 2018 by the return of Trading Spaces, the most popular series in the channel's history. Animal Planet's new series roster includes Rescue Dog to Super Dog (dogs trained to service people with disabilities), My Fat Pet (dealing with animal obesity) and Monster Rivers, featuring River Monsters host Jeremy Wade.  At Investigation Discovery, Univision nightly news anchorperson Maria Elena Salinas will start a crime-oriented newsmagazine series there next month.  Four made-for-TV movies will be presented this December, with James Patterson-created series Murder is Forever and miniseries The Von Bulow Affair coming next year.  Unscripted projects ahead: multi-part miniseries on the infamous Son of Sam and Casey Anthony cases and Evil Talks (crime confessions). Former Discovery favorite Mythbusters will move over to Science Channel with new hosts, while OWN comes through with at least three new series this year, all unscripted -- The Book of John Grey (April 15), Checking Inn and Released. Grade: 4 Jacks 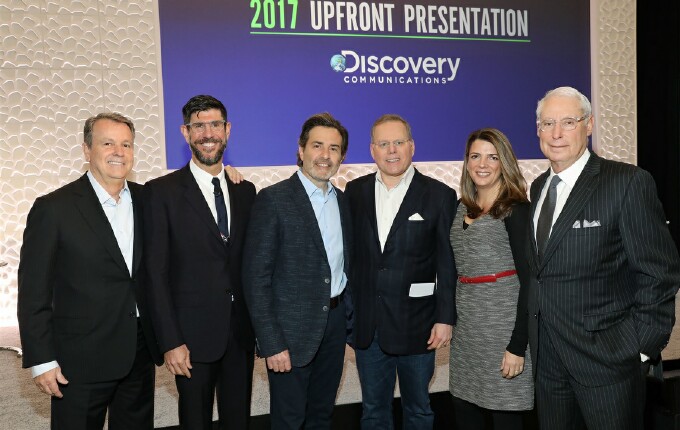 Cuisine: Standard breakfast menu from bagels to melon and fruit smoothies. Best eats: chicken slices on small waffles. Worst eats: the home fries which, had ketchup been served with them, would have ended up a good eat. Home fries without the ketchup?  You have to be joking. (Note: Cuisine grades are not factored into final Jacks scores.)  Grade: 2 Jacks

Innovative Opportunity: Campaigns with elements of merchandising and public service.  A recent Macy's promotion connected to Say Yes to the Dress included sponsorship of a 90-minute special on prom-goers and their formalwear for the big night, social media usage, licensed apparel created just for Macy's stores nationwide, retail displays and store events.  Also, 2,000 prom dresses were given to needy students (featured in the 90-minute special).  "You'll see a lot more things like this," Price promised.  Grade: 4 Jacks

Overall Grade: 3.5 Jacks  Good balance between inviting advertisers to adopt multi-platform campaigns, while checking out what's coming on Discovery's assortment of channels. And it was nice to see OWN included; it was not a part of this presentation last year or the year before.

Note:  Discovery Family, American Heroes Network and Destination America did not get any face or clip time.  What's happening with these Discovery services?