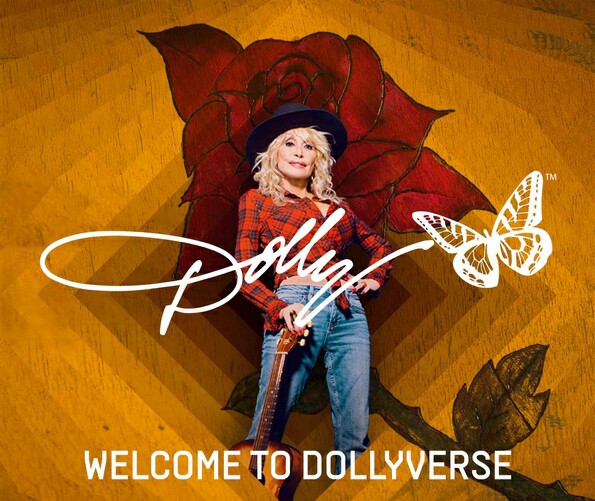 To promote the debut of Run, Rose, Run, Parton will make her first-ever appearance at SXSW on March 18, when she and Patterson will speak about the project at Austin City Limits Live at The Moody Theater. Emmy and Golden Globe Award nominee Connie Britton (The White Lotus, Nashville, Friday Night Lights) will moderate the conversation with Parton and Patterson. Immediately afterwards, she will give a live performance featuring songs from Run, Rose, Run, along with a few of her hits. Scheduled to open for Parton and Patterson are Kovic, Callie Twisselman, Electra Mustaine and The Brothers Moore. The entire event will be streamed live for free on "Dollyverse" by Eluvio, which also will power the "Dollyverse's" NFT sales.

The "Dollyverse" will release an exclusive selection of official and certified Dolly NFT collectibles, including limited-edition NFTs of the Run, Rose, Run music album and a limited series of Dolly-inspired NFT artwork, for purchase during and after SXSW. In-person attendees at Parton's performance will be able to claim a free NFT, while fans streaming the event will be able to receive tokens authenticating their participation.

"There's almost nothing more important to me than connecting with my fans. And I'm almost always up for trying something new and different," said Parton. "I'd say releasing NFTs at my first ever appearance at SXSW, with James Patterson by my side, definitely counts as new and different!"

"Yet again Dolly is at the top of her craft," said Danny Nozell, Parton's manager. "Her goal with new music has always been to use her gifts to connect with people. This partnership with BCL at SXSW, and the launch of 'Dollyverse,' provide her a totally new way to do that."

"I am a huge Dolly Parton fan. Who isn't? She is a national treasure, whose important contributions to the world transcend her incredible work as an entertainer," said Scott Greenberg, CEO of BCL. "Dolly is a true pioneer who brings the highest level of quality, heart and authenticity to everything she touches, which is why she's the perfect person to introduce to the mainstream audience an easy-to-use, Web3 experience that will live stream her SXSW event and provide them the opportunity own and enjoy her music -- not just a right to stream it – all designed to bring Dolly even closer to her fans.

Dolly Parton's participation in SXSW 2022 fulfills one of our longtime goals and we're absolutely ecstatic to have her involved in this year's event in such a unique way," said Hugh Forrest, Chief Programming Officer for SXSW. "Beyond her legendary status in the music industry, Dolly embodies the SXSW spirit as she extends her unique brand of creativity across many verticals. Most importantly, Dolly serves as an inspirational and unifying role model for millions of fans -- spanning different ages, occupations and viewpoints -- from all over the world."

Available for purchase beginning this Monday, March 7, and published by Little Brown and Company, Run, Rose, Run is set in Nashville and follows a young woman who comes to country music's capital city to pursue her music-making dreams. The source of her heart-wrenching songs is a brutal secret she has tried desperately to hide, but the past she has fled is reaching out to control her future -- even if it means destroying everything she has worked for. Fans will also be able to listen to an album of 12 original songs inspired by the novel and written, performed and produced by Parton. The album is co-produced by Richard Dennison and Tom Rutledge, and will be released this Friday, March 4, by her label, Butterfly Records. Click HERE for the album and HERE for the book.

BCL is the first-ever Blockchain Sponsor of SXSW, where the company will launch major on-site and virtual activations and decentralized content and experiences powered by the blockchain. Through its partnership with BCL, SXSW will mint its first-ever NFT, and SXSW's community of artists, filmmakers and brands participating at the festival will be able to create and distribute for free or sell directly NFTs of their work using the SXSW x BCL NFT marketplace ​found within the SXSW GO mobile app. SXSW attendees will be able to purchase NFTs with credit cards or cryptocurrency with support for all major Ethereum wallets.

Eluvio's technology is eco-friendly and highly energy efficient both in the ways it manages media and uses blockchain technology. Through a novel compositional and just-in-time protocol, the Eluvio Content Fabric does not make digital file copies and dramatically reduces the network storage and usage requirements of today's traditional streaming and distribution systems. The Eluvio Content Fabric's blockchain also uses an eco-friendly "proof-of-authority" consensus, which avoids the high energy consumption used in computational "proof-of-work" blockchains.

BCL will also host discussions about the convergence of entertainment and technology, activities and special events daily from Friday, March 11, to Sunday, March 13, at Trinity Hall in Austin (located at 5th and Trinity). More information regarding BCL's involvement at SXSW 2022 can be found at bcl.xyz/sxsw or by following BCL on Twitter @wearebcl.

Dolly Parton is the most honored and revered female country singer-songwriter of all time. Achieving 25 RIAA-certified gold, platinum, and multi-platinum awards, she has had 26 songs reach #1 on the Billboard country charts, a record for a female artist. Recently, Parton reached #1 on the Billboard Christian Airplay Chart for the first time for her duet with Grammy award-winning Zach Williams of "There Was Jesus," for which they won a Grammy this year, making that her 11th Grammy win. She received her first Dove Award for short form video for her collaboration with For King & Country on the

song "God Only Knows." Parton is the first artist to have topped the Billboard's Adult Contemporary, Christian AC Songs, Hot Country Songs, Christian Airplay, Country Airplay and Dance/Mix Show Airplay radio charts. Parton recently became the first country artist honored as Grammy MusiCares Person of the Year given out by NARAS. She has 44 career Top 10 country albums, a record for any artist, and 110 career-charted singles over the past 50+ years.

In 2014 the RIAA recognized her impact on recorded music with a plaque commemorating more than 100 million units sold worldwide. Her 2016 #1 album, "Pure & Simple," which topped the Billboard Top Country Albums and Americana/Folk Albums charts and debuted at No. 1 in the U.S., Canada, U.K. and Australia, added to that massive tally. She has garnered eleven Grammy Awards and 50 nominations, including the Lifetime Achievement Award and a 2020 win with for KING & COUNTRY for their collaboration on "God Only Knows"; 10 Country Music Association Awards, including Entertainer of the Year; five Academy of Country Music Awards, also including a nod for Entertainer of the Year; four People's Choice Awards; and three American Music Awards. In 1999, Parton was inducted as a member of the coveted Country Music Hall of Fame.

Last year, she released the Christmas album "Holly Dolly Christmas" which went #1 on the Billboard Country and Holiday charts, as well released the bestselling coffee table book Songteller: My Life in Lyrics. This year she won an Emmy Award for Outstanding Television Movie for the film Dolly Parton's Christmas on the Square. To date, Parton has donated over 175 million books to children around the world with her Imagination Library. Her children's book, "Coat of Many Colors," was dedicated to the Library of Congress to honor the Imagination Library's 100 millionth book donation. In March of 2022, Parton will release the book Run Rose Run which she co-authored with James Patterson, alongside an accompanying album of the same name with original songs inspired by the book. Parton also released her own fragrance line this year called "Dolly: Scent From Above." From her Coat of Many Colors while working 9 to 5, no dream is too big and no mountain too high for the country girl who turned the world into her stage.