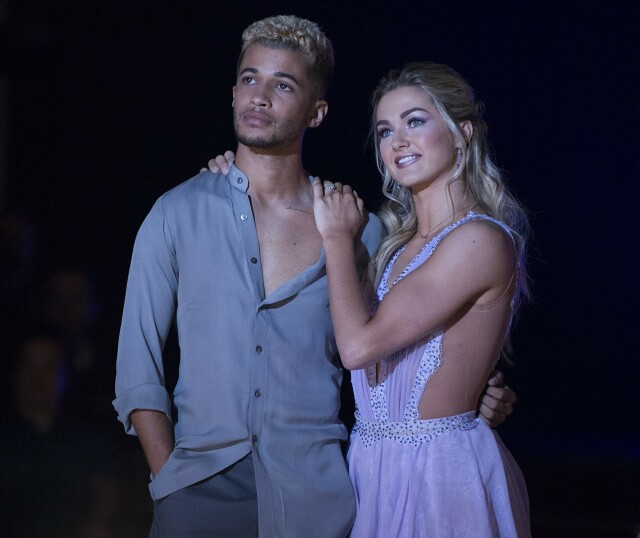 The ballroom of ABC's Dancing with the Stars was literally transformed into the bawl-room last night as the 11 remaining couples interpreted their most memorable year in dance.  There wasn't a dry Kleenex left by the last dance, as all the couples expressed tales of loss, heartache and personal triumph.  The big winner of the night was Jordan Fisher, who alongside partner Lindsay Arnold walked away with two tens -- the first awarded for season 25.  (The two are pictured above.)  Fisher’s emotional contemporary dance, dedicated to his adoptive parents, was called "flawless and exquisite" by the show’s judges.  “I have no more fluids,” revealed an emotional Fisher post-show.  “It’s the ups and downs, telling the story, getting the tens.  I’m trying to figure out how to get composure.  It’s been an emotional night for sure.”

“And the first tens of the season!” added Arnold.  “To be completely honest after finishing that routine in my mind I didn’t care what happened.  It was such a special moment we got to share.  Then the icing of those tens…  It really took it to whole new level.”

Fisher agreed.  “The tens were just the cherry on top of an incredible night,” he said.  “It was a sundae from heaven.”  Fisher also revealed that it was the first time he’d shared his story of adoption, as he really never felt the need before.  “My parents are here tonight, and while I’m grateful to the woman who gave birth to me, she provided a template of what not to do in life and that story is what makes me who I am today.”

Another tearjerker performance came courtesy of Lindsey Stirling and her partner Mark Ballas.  The couple’s touching Viennese Waltz, dedicated to her father who passed from cancer in 2016, saw Ballas actually donning her dad’s signature hat and scarf.  “This has been a really heavy week,” admitted a still-emotional Stirling after the show.  “Mark has seen me cry a lot this week and I didn’t know it would be this hard to talk about.

“The lead-up was hard but I feel at peace and like my dad was here with me helping,” she continued.  “It was emotional as my mom was there and even admitted that Mark kind of looked like [my dad] with the hat and scarf.  The hat was so him and it did feel like dancing with him again.”

“It was a huge honor doing this for Lindsey,” added Ballas.  “We spent a lot of time ironing out details and it all started with the relationship, talking about who her dad was, what he wore and trying to incorporate that into the choreography.”

It was a doubly hard night for Nick Lachey, who not only had to overcome the emotion of his own personal story (marrying his soul mate and fellow contestant Vanessa Lachey) but his wife’s own personal story of the premature birth of their son Phoenix.  His contemporary dance with partner Peta Murgatroyd received the lowest score of the night, yet was fraught with emotion.  “When you go through something like a premature birth and you start confiding in people that our baby spent six weeks in an incubator, you then start hearing peoples’ stories of similar experiences.

“I’ve found there is strength in sharing those stories and letting people know it’s scary,” he continued.  “But you can come out on the other side and thank God, our little boy is healthy and fine.  There is strength when you are going through it and then sharing it.  I was petrified.  I’m not going to lie; it’s one of the hardest things I’ve gone through, but it was important to share it.” 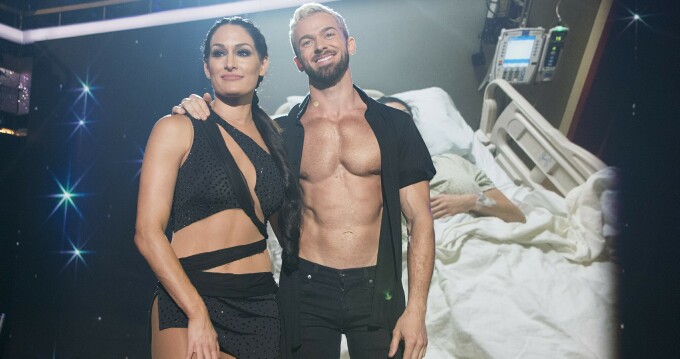 Wrestling diva Nikki Bella and partner Artem Chigvintsev (pictured above) delivered a stellar contemporary dance, earning 24 points for their effort.  But it was Bella’s emotional tale of recovery from a serious neck injury -- one that could have left her paralyzed -- that also hit a nerve with viewers.  “Going into the hospital all I could think was I want to get back in the ring,” she recalled after the show.  “All I could think about was my comeback -- seven months I did.

“There have been scary moments where I’ve tweaked my neck,” she continued,   “but thinking about those things puts you in more of a situation to be injured, so I go in not thinking about it.”

Bella also revealed that fiancé John Cena was her rock throughout her recovery, and despite him urging her to quit at times, she’s grateful for his support.  “He never left my side,” she said.  “He still does [ask me to retire].  He says, ‘You have your health, why continue?  You have done everything you can as a WWF Superstar.’  But I don’t believe that; I feel there is so much more females can do.”

Next week the season’s 10 remaining couples will continue their quest in a Disney inspired night when Dancing with the Stars continues at 8 p.m. on ABC.