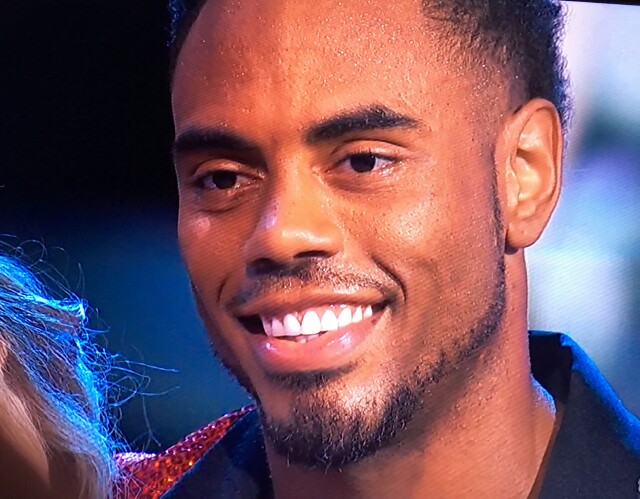 Season 24 of ABC’s Dancing with the Stars crowned its champion last night and remained unpredictable right up to the big announcement.  In a perpetually startling season during which many of the best dancers were prematurely eliminated, the final three nervously anticipated news of their fate.  Gasps were audible throughout the ballroom at the most shocking moment yet -- frontrunner Normani Kordei was not in the top two competitors!  Third runner-up David Ross and Rashad Jennings (pictured above) emerged as the season’s finalists. With confetti cannons at the ready host Tom Bergeron made the announcement that Jennings and partner Emma Slater were the season’s champions.  “All I could think was, it could be us, it could not be us,” an elated Jennings told me after the show.  “That’s a very long waiting period right there; waiting to see if you’ve won or not.  I didn’t know what the hell was about to happen."

“I was super shocked,” he continued.  “I don’t know if you caught my face but I literally could not believe it.  When I heard Tom say our names … you have to imagine being there.  It’s not something that happens every day.  It solidified all of the hard work that we put in.”

According to Jennings it was during boy band week that a casual conversation was struck up about who might win, and all four male competitors agreed that four women would be standing at the end.  “For it to be me and David up there, we looked at each other and said, ‘This is completely different from what we thought,’” he laughed. “David has become a friend. There are no losers in this at all.  We were going to be for happy for whoever won but I can tell you it feels so good that it was us!”  (Pictured below awaiting the outcome, left to right: Lindsay Arnold, David Ross, Normani Kordei, Valentin Chmerkovskiy, Emma Slater and Rashad Jennings.) 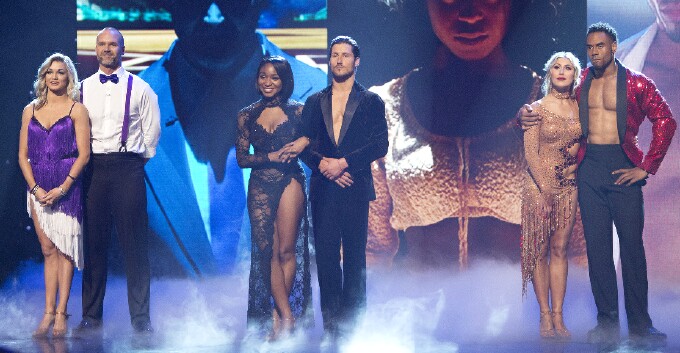 Jennings won’t be hanging up his dance shoes anytime soon; he’ll be joining the “DWTS: Live! Hot Summer Nights” tour, traveling across the country while continuing his football training.  “I’m enjoying myself,” he admitted.  “When the team calls, I’m ready!  I’m training and dancing so they’ll know I’m in shape.”

“How about that!” beamed runner-up David Ross after the show.  “I’ve said this a million times, but I didn’t plan on being here past week three, so the fact Lindsay (Arnold) brought me to this level and I’ve enjoyed it so much and grown as a person … she’s pushed me to the limit and what I’m most proud of is that I took her way further than she’s ever been.”

“I’m so proud of that,” an elated Arnold added.  “Especially [because David] is somebody nobody would have ever guessed.  We got to the finals and second place!  I couldn’t be prouder.” 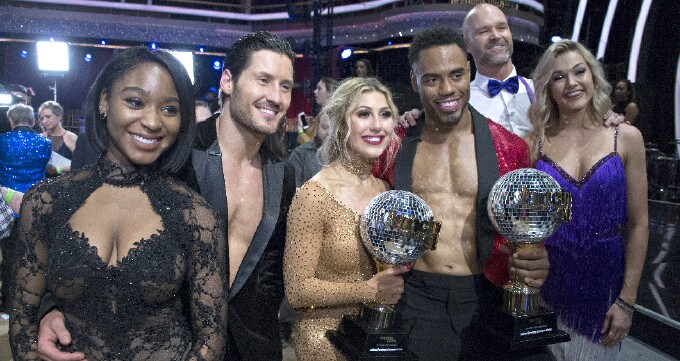 For Ross, it was the support of his fans that most touched him over the course of the season.  “I just appreciate the fact that people voted for me,” he said.  “It makes me so thankful. Just knowing that people enjoyed watching us on the show is probably the biggest compliment you can ever get.”

Unlike Jennings, don’t expect Ross to be going out in the road dancing another Magic Mike routine anytime soon.  Like his baseball career, his dance shoes are retired.  “This is the end of my dancing in public,” he laughed.  “I’m only going to do it in private with my wife now.  I have that [abs] T-shirt, so that you will see at the beach.”

Normani Kordei proved herself a force throughout the season.  She and partner Valentin Chmerkovskiy provided viewers with some of the season’s most dazzling routines, and she told me she has no regrets.  “I’m ecstatic,” she said. “I grew so much during this experience.  I feel I’m walking away with a win.

“I feel super rewarded to have a friend for life in Val,” she continued.  “I learned so much from him [and] I learned a lot about myself.  I’ll never be able to express or thank him enough.  Dancing with the Stars gave me the opportunity to speak about things I probably would never have had the courage to do otherwise.  Just for me to recognize that I’m capable of doing a lot more than I ever gave myself credit for ... I feel a whole new world has been introduced and opened.”