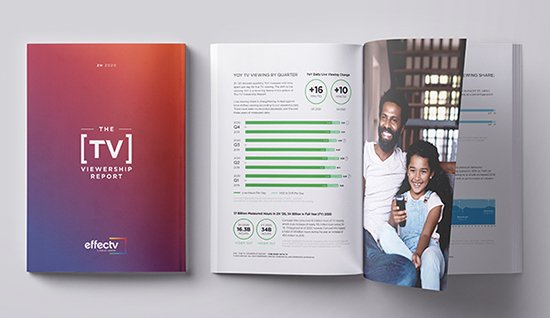 If you want an understanding of TV viewing habits, there's no better source for insights than Comcast's viewership data from over 17 million households. It is, according to Heather Coghill, senior director of audience insights, a valuable source used to gain insights for Effectv's twice a year TV Viewership Report. This most recent release of the second half of 2020 contains a wealth of fascinating takeaways that Coghill shared with MediaVillage.

Admittedly, 2020 was an incredibly unusual year with a pandemic, Black Lives Matter, a shift to working from home and a heated political environment all impacting various aspects of our lives. But Coghill believes that the trends discerned in this report are, in fact, the harbingers for future media consumption, especially as she sees the trends evolving through the full year.

The data shows that there has been a great change in viewing behavior from previous years. "We saw a rise of live TV viewing in the latter half of 2020," Coghill explained, "Eighty-nine percent of all viewing in Comcast households was done live, which was the largest we've seen, and the average Comcast household spent +16 more minutes a day with live TV in third quarter and +10 more minutes a day with live TV in fourth quarter (compared to the same time in 2019)." She predicts linear will continue to grow because of the pent-up demand for fresh content. Much of the production was halted in 2020 because of COVID-19. And while there is obviously more streaming and digital viewing taking place now, this consumption is, "being done in conjunction and not necessarily as a replacement (to linear). There is so much content out there for viewers to find and they have all of the control," she said.

The year also saw a huge rise in cable TV viewing overall. Coghill noted that, "Cable networks were the driver of the growth in live TV, 71% of all viewing was to cable networks -- the highest share we've seen since we began tracking three years ago." Compared to broadcast and premium, cable viewing was by far the biggest winner in terms of growth, a surprising takeaway for Coghill. Impressive growth occurred in several genres for different reasons.

An Unusual Year for Sports

Because of the disruption of certain sports seasons, "the viewing shifted along with that," she said, "But the growth we saw in news points to the fact that there is clearly a demand for live content and sports always has strong viewership. I think that as the seasons come back to normal, viewership will follow." While people missed their favorite sports, once seasons started to come back, viewership followed and certain sports gained new viewers and new fans. "Sports fans who were not necessarily golf (or racing) fans were watching PGA and NASCAR because that was the only sports they could get," she noted. It will be interesting to see if these sports will continue to attract higher viewing in 2021.

Will there be a post pandemic new normal? "We have been trending in this direction already," she admitted, "Television is no longer about the top networks in primetime. Even though live viewing was up it wasn't up because of the major top networks or an increase in prime viewing. What we are seeing is that households are watching all day, every day. There is growth across dayparts, especially with people being home … and households are watching different types of content." Interestingly, she revealed that while the average household watches 33 different networks, if you add up all the most viewed network across all Comcast homes, the number of networks is a staggering 311 different networks.

But, she concluded, there is really no normal, "Everyone is doing what works for them and watching at different times of day and different networks and there is enough content now to allow for that." In other words, stay tuned…