Riveting "El Chapo" is a Winner for Univision and Netflix 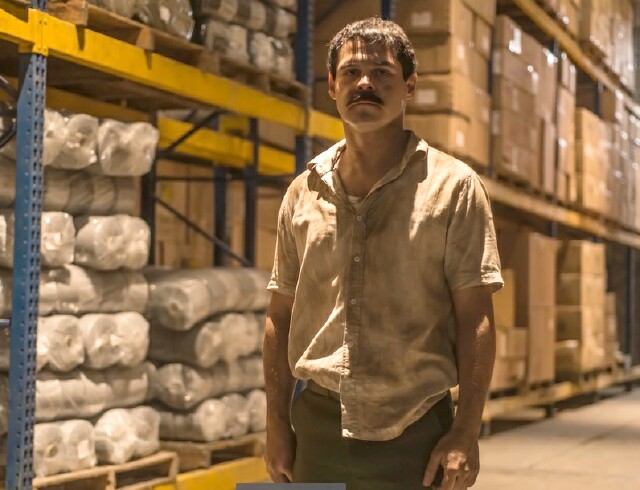 Joaquin Archivaldo Guzmán, also known as “El Chapo,” is Mexico’s most notorious drug lord and the leader of the Sinaloa cartel. He’s been active in the drug game since the Eighties, was captured at least three times, had a collective bounty of over $8 million on his head andescaped a maximum-security prison. Twice. Now, he’s the subject of Univision’s new scripted series, aptly titled El Chapoand premiering on Sunday, and let me just say that this show is, for lack of a better word, dope.

The show has a very Narcos kind of feel, which isn’t too surprising considering that it’s the first product of Netflix’s partnership with Univision’s Story House Entertainment. The formula used seems to have remained the same as well. It’s a combination of high production values and powerful performances from actors who are relatively unknown in America. The intro is also quite impressive featuring a sequence with some very well put together visuals and a mesmerizing song named “Vienen a Verme” written by Puerto Rican songwriter Andres Botero and Colombian composer Andres Sanchez.

The fact that the show is telecast entirely in Spanish with English-language subtitles doesn’t take away from how engaging it is, either. Two minutes into the first episode and the subtitles are definitely the last thing on one’s mind.

El Chapo opens in 1985 and follows its titular character through his humble beginnings as an underling in the Guadalajara Cartel. Desperate to earn the respect he’s constantly denied, he begins to make some pretty ambitious moves, including the completion of his first tunnel at the U.S. border. Marco de la O (pictured at top) is never less than riveting as Guzman. He does a wonderful job of humanizing an infamously brutal and resilient criminal during his rise to power -- without normalizing his behavior in the slightest.

Rooted in fact and permeated throughout with a lit fuse vibe, El Chapomanages to take a familiar topic and give it a fresh new feel. Audiences around the world have always been fascinated by the drug trade’s seedy underbelly and the lifestyles of those who profit from it, but the combination of a ripped-from-the-headlines plot and top-shelf storytelling makes this production a unique experience that’s just too good to pass up.

I especially appreciate the presence of an all Latino cast and crew on such a mainstream project. It was created by Silvana Aguirre Zegarra and Carlos Contreras, produced by Daniel Posada, and Season One is directed by Jose Manuel Cravioto and Ernesto Contreras. Additionally, the cast consists of strong Latino actors with notable credits, and the caliber of their performances avoids the cheesiness that can sometimes plague these types of endeavors.

On a very basic level, this show has what most people want in escapist entertainment, even that of the fact-based variety. There’s drugs, drama, danger and the intriguing knowledge that most, if not all, of this shit really happened. I’m actually trying very hard not to divulge any of the major plot details because, as someone who didn’t know too much about El Chapo prior to this series (I hadn't even read Sean Penn's controversial interview with him in Rolling Stone), I’m excited that his story is so interesting (and its cinematic presentation so thrilling).

The real-life El Chapo is currently in U.S. custody and is scheduled to appear in court May 5, 2017, and rightfully so because, make no mistake, he is not a hero. However, I feel like that won’t stop viewers from silently rooting for him. He is the story’s protagonist, and although his actions are nothing short of deplorable, the emotions he feels are ones that all human beings experience. He’s driven by a need to prove himself, and the fact that his peers constantly underestimate him and what he’s capable of makes for great television, especially since that success-is-the-best-revenge mentality is one that most of us have been able to relate to at one time or another.

El Chapo will be must-see appointment TV Sunday nights on Univision and yet another binge phenomenon when it finally hits Netflix.