Elisabeth R&#246;hm Makes Her Directorial Debut with Lifetime's "Girl in the Basement" 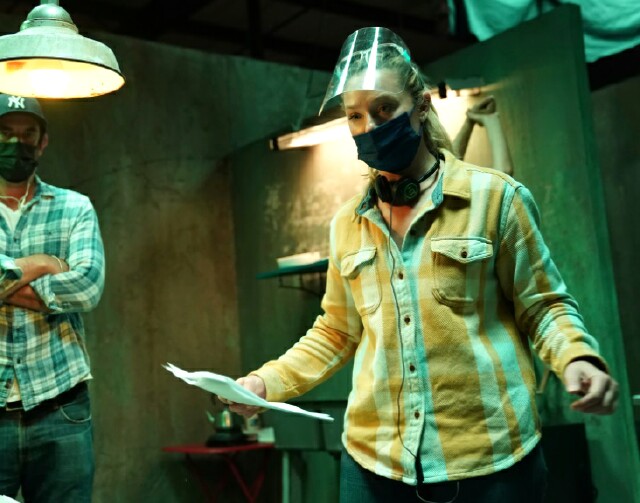 Weeks after watching Lifetime's Girl in the Basement, the story haunts. It's not those moments in a scary movie when you're startled by an ominous figure darting across shadows. No, this is far scarier than movie monsters enhanced with special effects. The monster here is a man; the victims, his daughter and their children.

Yes, their children -- those born to this deranged villain and his daughter. The film, premiering Saturday, February 27, chronicles the abject terror of rape, incest and kidnapping. It's inspired by the true story of an Austrian father and his daughter, who was imprisoned for 24 years. There's nothing light or breezy about this, and it is the sort of movie that could easily become too dark to watch. Yet by pacing it correctly -- it is taut throughout but offers some welcome breaks -- viewers will find they need to watch, if only to discover who survives and how.

"My goal was to really not sensationalize something that is so horrifying but to really ground it in truth and to get into a real narrative about ancestral and familial abuse," first-time filmmaker and longtime actor Elisabeth Röhm tells MediaVillage in an exclusive interview. Best known for playing ADA Serena Sotherlyn on Law & Order and Eileen on Jane the Virgin, Röhm (pictured at top and below) is now putting her energy into directing. In addition to this movie, part of the network's robust "Ripped from the Headlines" slate, Röhm is developing three other movies for Lifetime. "Growing up in this business, so to speak, you don't see a lot of you reflected back to you," Röhm says. "You don't see the women running the studios or directing or operating the camera. My passion for story and narrative got wrapped into my acting and writing. [The business] wasn't reflected back to me; I thought it was a man's world. In the last four or five years, we have seen the landscape begin to change. [I began to think], 'Why not me -- and her, and her and her -- being reflected back?'"

She credits Tanya Lopez, Executive Vice President, Movies, Limited Series and Original Movie Acquisitions for Lifetime and LMN, for ensuring far more women are behind the camera. Röhm is proud to be joining actresses, including Kyra Sedgwick, Angela Bassett, Eva Longoria and Robin Givens, who broke into the directing ranks with a Lifetime movie.

In Girl in the Basement, the tone is set early. The first hint of the darkness to come is the extent to which Don (Judd Nelson) is extraordinarily controlling. Dictatorial, he alone must make the decisions for their teenage daughters and is angry at his wife Irene (Joely Fisher) for allowing their younger, more rebellious daughter Sara (Stefanie Scott) to go to a party. When Don overrules Irene, the girl sneaks out anyway.

Fights ensue when Sara rolls in the next morning. Soon, the father locks his daughter in a concrete chamber in the basement. He is the only one who knows of its existence. While it may seem unbelievable that someone could be locked up downstairs while life continues upstairs, the room is hidden behind a bookcase on tracks. He even muffles sounds traveling through the air vents. When Sara fights her father and tries to escape, he overpowers her. And rapes her. Repeatedly. For 24 years.

Nelson reflects on playing this felonious father, and how he found some humanity in him.

During the harrowing two hours, Sara gives birth, by herself, to several children. They all live in the subterranean room. Recognizing that such tension and repugnant behavior could repel an audience, Röhm explained that she very consciously moved the action from the windowless cell to the upstairs, where life was as normal as it got for that family.

"I think it was very challenging to have to be in the room for half of the movie," Röhm acknowledged, adding that she worked to ensure that the story would never become boring as it spanned over twenty years of torment and confinement.

That was "a lot to capture," she added. "I wanted to let the movie breathe when you are in the upstairs world. Myself and my team really churned up the wind and birds chirping and nature. That would really help the basement breathe in a sense. That was cinematically the choice to help the viewer."

Since this is Lifetime, there will be a documentary following. In Beyond the Headlines: Surviving Child Abduction and Imprisonment, two survivors recount their stories on overcoming childhood trauma. Lori Poland, kidnapped at 3, was left for dead in an outhouse in 1983. Katie Beers was abducted and imprisoned for 17 days by a family friend in 1992.

Röhm is determined to use the platform of directing for good, telling stories that need to be told.

"I want to tell movies that are part of movements," she says. "Why do anything if it is not going to change the world? It is a movement, a call to action. Hopefully, it represents voices similar to this character."

Girl in the Basement will be telecast on Saturday, February 27 at 8 p.m. on Lifetime.