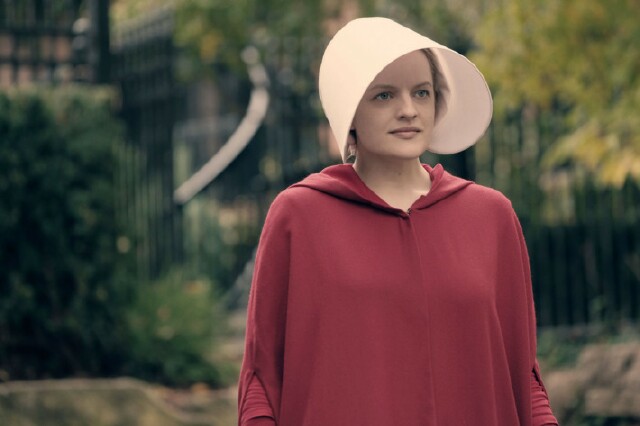 The very best thing about this year's Primetime Emmy Awards was this: New talents with a distinctive voice, especially talents of color, were honored. From Donald Glover taking a double bow for acting and directing Atlanta, to Hulu making streaming history with multiple awards for The Handmaid's Tale (pictured above) to Lena Waithe of Master of None becoming the first African American woman to win an Emmy for writing a comedy series, it was a marvelous showcase. Also great: Sterling K. Brown following up his win last year for The People v O.J. Simpson: American Crime Story with a win this year as Outstanding Lead Actor in a Drama Series for This Is Us.  His acceptance speech, despite being cut off by the orchestra, was another highlight.

The worst things: One outstanding series was robbed of an Emmy it should have received, while another won in a category it had no business being placed in. Atlanta, in stunning fashion after Glover's earlier wins, lost the Outstanding Comedy Series award to Veep, the winner in that category the last two years.  No way this acclaimed FX series -- groundbreaking on many levels in its first season -- should have been denied.  Moments earlier, Black Mirror, the brilliant Netflix-distributed anthology series, picked up the made-for-TV movie Emmy for its excellent "San Junipero" episode.  Trouble is, Mirror is a series and "San Junipero" is an hour-long TV episode, not a made-for-TV movie.

Don't put Mirror or Netflix at fault here.  Blame Emmy organizers who in recent years have zapped the credibility of this category by allowing the inclusion of extended series episodes.  (Sherlock won this way last year.)  Was this episode worthy of Emmy recognition?  You bet -- in the drama series categories, where "San Junipero" could have competed for best writing, directing, guest actors and so forth.  How does the Academy of Television Arts & Sciences explain this away?  If not among us viewers, then  to members of the made-for-TV-movie producing community who are seeing some of that genre's best work shut out, replaced by such series episodes.

The solution is simple and two-fold:  Insist that no TV series episodes of any length are placed in this category, and have the nominees be movies that run from 90 minutes to three hours (giving 10-minute latitude on either end).  A simple solution to execute, and execute now.

More Notes from the Passing Parade

The future of TV is apps. That's the clarion call Apple chief executive officer Tim Cook delivered two years ago during an Apple TV upgrade introducing a variety of new uses to users.  What's more, before a packed Silicon Valley audience, Cook and colleagues allocated time to demonstrate how innovative those features can be, from ordering merchandise on the spot through the TV set to hooking up with Airbnb and Zillow.

Cook and his audience reunited at Apple's new and impressive Cupertino, California headquarters last week to show off the next iteration of Apple TV, starting with more than 10,000 apps and more innovative features already in play, including virtual reality content from Littlestar and ticketing through StubHub.  However, new innovations were nowhere to be showcased, not even those users could tap into by command via Siri.  Instead, the focus was on introducing ultra high-definition and high dynamic range technologies which result in better picture quality -- features already commonplace in many smart TV sets and TV-connected devices.  Even a quick demo of multiplayer adventure game Sky couldn't derail the impression that this Apple TV upgrade (priced at $179 and available by end of this month) was out to catch up with rivals in its marketplace, instead of leading the marketplace forward.  Time for Apple to inspire its developer ecosystem to bring the innovations on, and when they do, tell the public about them.

Remember Hulu's announcement at its Upfront event last May that it was launching an interactive commerce by TV option this fall?  Here's a recap: When watching an ad for a new movie, if you want tickets to watch that movie that afternoon or evening at the nearest theater, you hit the remote or speak through Siri or Alexa, and the tickets get ordered through the TV set.  Hulu chief executive Mike Hopkins says that feature is very alive and proceeding, under a pilot tryout using Roku and an unidentified advertiser.  "Once we see results from this test, we'll roll T-commerce out aggresively," Hopkins told a Paley Center For Media breakfast audience in New York last week.  "That's the holy grail."

Univision Communications, largely through its Fusion Media Group subsidiary, has introduced action after action the last few months to spike more diversity on the tube.  First came Fusion's creative board, announced in May, with notables from Viola Davis to Jodie Foster in search of promising talent of color on both sides of the camera.  Then participation in the Creative Thread Foundation, a consortium out to carve quicker pathways for diverse programming and talent to reach viewers.  Now Univision has put Project Unbound in motion.  Unbound's focus is on eliminating barriers to inclusion within the entertainment scene in general.  Look for all three projects to go "full steam ahead" and work with each other, said Fusion co-president Camilia Jimenez Villa, in New York last week for a Paley Center screening of El Chapo.  Several projects from these ventures will be announced before the end of the year, followed by much more in 2018, Villa added.

Keep an eye out for Samsung's annual developers conference in Silicon Valley next month.  Several smart TV app development sessions are on the agenda, and this may be the event where Eko, the interactive TV programmer counting Samsung and MGM among its investors, announces its first rollout of original series, including an adaptation of MGM's War Games movie.  Eko lets users dictate the course of a program's plot or characters when prompted on the screen.