Eric McCormack on the Return of “Will & Grace” 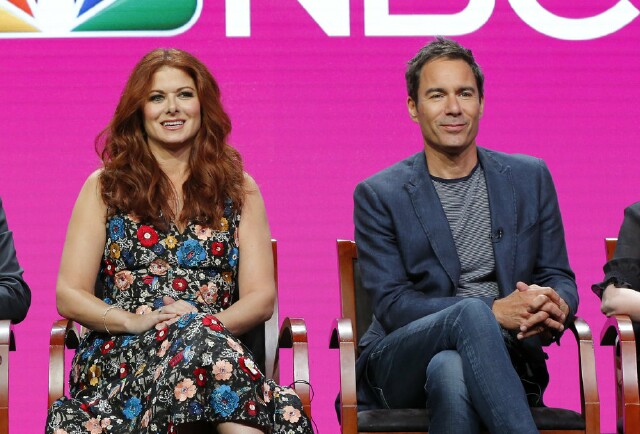 On July 20, 1998, Eric McCormack, Debra Messing, Megan Mullally and Sean Hayes all stepped onto the stage at the Television Critics Association Annual Press tour to present a new NBC show -- Will & Grace.  Along with the show’s creative team, the new cast fielded questions during a hilarious session with the press.  The biggest question of all was, “Will we see a gay kiss on network television this season?”  Over the course of the next eight years, viewers would indeed see a gay kiss (or two), witness the sitcom’s huge societal impact and, following a move to Thursdays, become one of NBC’s Must-See TV staples.  The series return to the network this week (11 years after it officially “ended”) made for a very different TCA panel last month.  Gone were the pre-show nerves that come with debuting a new show; in their place was feeling of welcomed familiarity by its stars.  “I remember it well,” Eric McCormack told me of that first TCA panel.  “But I am dressed much better now than I was then, that I do know.  I was 34 and wasn’t a kid but I was new to having my name in the title of a network show and making sure I was doing everything right.  Now we have the freedom to be ourselves and to know what we are delivering.”

Since its 2006 finale, Will & Grace has continued to amass generations of new fans in syndication.  So when the cast and creative team got together late last year to create a short pre-election social commentary video, they almost broke the Internet and inadvertently opened a massive can of worms.  “We felt like we’d done a finale that not only answered the questions, but made it impossible [to return],” admitted McCormack (pictured at top with Messing).  “All it took was people seeing that election video; what people responded to was not how funny it was, but that the show looked and felt the same.  We all went, ‘That’s true, so why are we stuck with this ending that we gave it when we don’t have to be?’  When [NBC Entertainment Chairman] Bob Greenblatt asked, ‘Do you want to do more of these?’ all of a sudden it was easier to answer that question differently.”

In fact Greenblatt has such high hopes for the reboot that the initial twelve-episode order was upped to 16 with an additional 13-episode second season ordered, and all before a single second of new footage was shot.  “It’s a strange thing to have someone announce that there is a second season of a show no one has even seen yet, even [before we] shot the first episode,” McCormack said of the announcement. 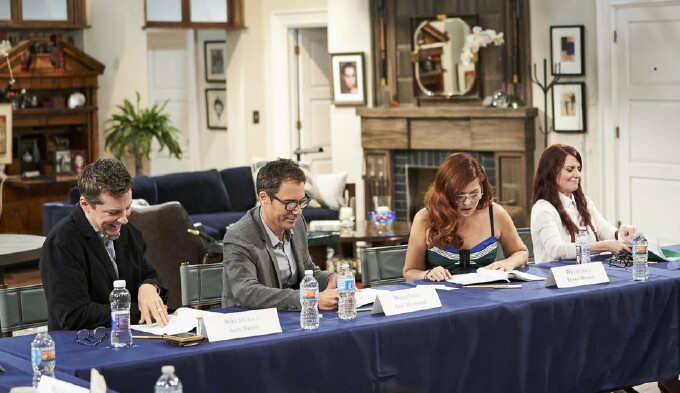 According to McCormack (pictured above, second from left, at a table read with Hayes, left, and Messing and Mullally at right), he was actually surprised by the reaction to the election video.  He thought it might be a case of, “Isn’t it cute to see them together again,” before moving to the next thing.  However, it wasn’t long before the creative forces (and the rest of country) were asking the cast, “Why aren’t you doing this?”  One thing he did know is, they were doing something special. “When we all read the script we knew it was kick-ass,” he smiled.

“[The reaction to it] did surprise me,” he continued.  “I didn’t realize in syndication how many other people had come aboard.  The people that responded to that video weren’t just people that missed the show because they used to watch it, some were young people that have discovered the show in the last 10 years and were too young to have originally seen it on the first run.”

McCormack says he’s eager to dust off those Will Truman shoes and when it comes to his approach to play the character, viewers shouldn’t expect anything too different.  “What will be different?” he mused.  “From the first season, everything … from all the other seasons, nothing.  First of all I don’t think anyone wants anything different and what [people] got out of that election video was, ‘Oh, just more of that please!’  So we are not here to reinvent this wheel.  We are going to give it a coat of paint.  It’s a good wheel.”

As our conversation drew to a close I couldn’t help but pose that persistent first TCA panel question again.  “So will we see a gay kiss this time around?” I asked.

His response had me roaring.  “Of course you will!” he declared.  “I’ve made out with Taye Diggs!  This time around you might get a hand-job.”

My, how times have changed.