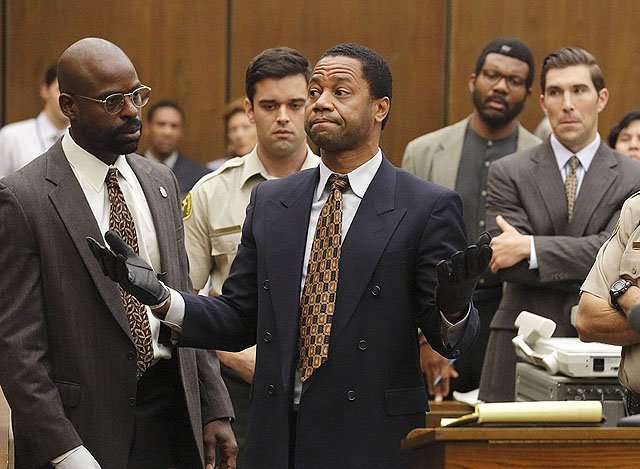 Given the extraordinary quality of recent limited series this promises to be the most exciting and suspenseful category at the Emmy Awards ceremony. The nominated movies were pretty great too, but collectively nothing comes close to the five amazing nominees for Outstanding Limited Series: ABC’s “American Crime, FX’s “Fargo,” AMC’s “The Night Manager,” FX’s “The People v. O.J. Simpson: American Crime Story” (pictured above) and History’s “Roots.”

Outstanding Limited Series. The real American crime here is that only one of the two outrageously good FX limited series nominated in this category can win. But as grand as Fargo and The People v. O.J. Simpson: American Crime Story were, I would argue that American Crime was the most original and distinctive production in the group and as deserving of the Emmy as any other. It was easily the boldest thing on broadcast television during the nomination eligibility period.

Egregiously overlooked: Nothing – because no other limited series came close to the mastery of these five nominees.

Outstanding Television Movie. I thought the boldest movie project on any network during the eligibility period was NBC’s sweet drama about Dolly Parton’s childhood, Coat of Many Colors.  A big broadcast network producing a gentle family friendly drama in this day and age? Amazingly, the earth did not spin off its axis. Predictably, the movie was not nominated. I expect HBO’s adaptation of the Tony Award-winning play All the Way to win this one, though PBS’ Sherlock: The Abominable Bride could pull an upset. The other nominees – HBO’s Confirmation, BBC America’s Luther and Netflix’s A Very Murray Christmas – are seemingly out of the running.

Prediction: All the Way (HBO)

Preference:  All the Way (HBO)

Egregiously overlooked: As noted above, Coat of Many Colors (NBC)

Outstanding Lead Actor in a Limited Series or Movie. This category is tougher than it looks.  Bryan Cranston would seem to be the shoo-in for his portrayal of President Lyndon B. Johnson in HBO’s All the Way; after all, he did win a Tony Award for the original Broadway production on which this movie is based. And, frankly, he deserves to win. But Courtney B. Vance and Cuba Gooding Jr. both have major momentum for their work in FX’s The People v. O.J. Simpson: American Crime Story, Benedict Cumberbatch of PBS’ Sherlock: The Abominable Bride is an Emmy favorite for his work in this franchise and Idris Elba of BBC America’s Luther is having an extraordinary year. Any of them could take home the award. Their fellow nominee, Tom Hiddleston of AMC’s The Night Manager, shouldn’t expect much.

Outstanding Lead Actress in a Limited Series or Movie.  Something will be radically wrong if Sarah Paulson doesn’t win for her heartbreaking performance as Marcia Clark in FX’s The People v. O.J. Simpson. What a shame that Kirsten Dunst, the star of FX’s sizzling Fargo, is up against her. The other nominees in this category are Felicity Huffman of ABC’s American Crime (ABC), Audra McDonald of HBO’s Lady Day at Emerson's Bar & Grill, Lili Taylor of ABC’s American Crime and Kerry Washington of HBO’s Confirmation.

Egregiously overlooked:  Nobody. The women named above were everything.

Outstanding Supporting Actor in a Limited Series or Movie. I was Team (Jesse) Plemons until I saw Sterling K. Brown’s stunning work in FX’s The People v. O.J. Simpson: American Crime Story. Sorry Jesse; if only FX had run the second season of Fargo this fall rather than last.  The other nominees in this category are Hugh Laurie of AMC’s The Night Manager; David Schwimmer and John Travolta, both of FX’s The People v. O.J. Simpson: American Crime Story, and Bokeem Woodbine of FX’s Fargo. Woodbine, by the way, could be a surprise winner in this category. As far as I’m concerned, Connor Jessup and Joey Pollari as tormented teenagers grappling with their sexuality in ABC’s American Crime deserved the nomination slots that went to Schwimmer and Travolta, both good but not nearly as stunning as those two talented young men.

Outstanding Supporting Actress in a Limited Series or Movie. I’m all about Jean Smart in FX’s Fargo; I mean, come on, it was a fantastic series and deserves something significant on Emmy night. And Smart was superb as the menacing matriarch of a Midwest mob. But I’m not ruling out Sarah Paulson or Kathy Bates from FX’s American Horror Story: Hotel. It’s a big year for Paulson, and Emmy loves Bates. Regina King of ABC’s American Crime is also a significant contender. The other nominees are Olivia Colman of AMC’s The Night Manager and Melissa Leo of HBO’s All the Way.