“Fosse/Verdon” Dances Into the FX Spotlight 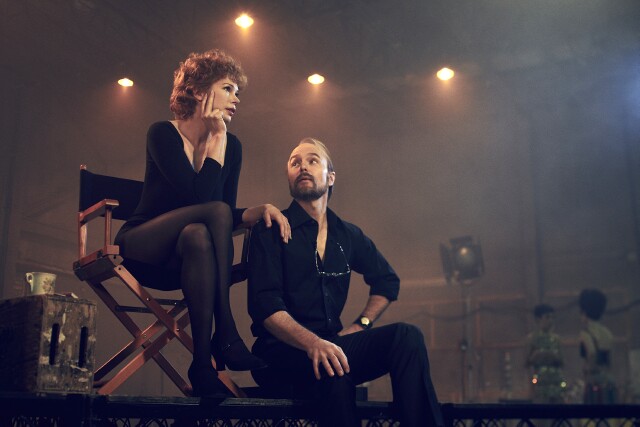 Fosse/Verdon takes viewers beyond all that jazz of splayed hands, knocked knees and cocked derbies into the complicated relationship between the late king and queen of Broadway, Bob Fosse and Gwen Verdon. Premiering Tuesday, April 9, this production continues FX’ streak of limited series in which each episode feels like a gift.  Michelle Williams’ Verdon is that ray of sunshine everyone wants to bask in, while Sam Rockwell’s Fosse is the self-destructive genius best admired from a distance.

Fosse was seductive, in a serial philanderer sort of way, but also as an artist.  No one understood that better than Verdon.  As wildly talented as Fosse was, he relied on her to articulate what was in his brain and transfer it to the stage.  She was also his ambassador to the world, able to smooth the feathers he ruffled. Williams portrays Verdon as strategic and wise, yet just beneath the cheerful surface a sea of vulnerability roils.  It’s a stunning performance destined to garner an Emmy nod.  And Williams shows off the moves she perfected while playing Sally Bowles in the 2014 Broadway revival of Cabaret.

“There is a certain aspect of training I did as far back as Marilyn,” she told MediaVillage exclusively, referring to her Academy Award-nominated lead role as Marilyn Monroe in My Week with Marilyn.  “I can’t deny that with Cabaret there were certain aspects of how my body moved differently.”

To dance in Fosse’s style requires far more than a rolled shoulder or a hip thrust.  He combined modern, jazz and tap with burlesque-house bumps and grinds, all wrapped in attitude.  Williams’ tap dance classes from when she was 8 are “serving me well now,” she said.  “It was 38 years in the making.  I feel like I was preparing my whole life for this.”

Williams also brings her experience as a mom, fiercely protective of a daughter.  Verdon and Fosse’s daughter, Nicole Fosse, a creative consultant and co-executive producer on Fosse/Verdon, shared, “She was absolutely lovable, and everyone’s memories of her are only fond memories.  But, like everybody, there was an edge sometimes.”

Fosse/Verdon reveals the famous couple on stage and at home; life was smoother under the spotlights. Chronicling them through flashbacks, highlighting iconic numbers from their shows including Chicago, the action spans five decades.  The series opens with the words “Hollywood: 19 Years Left.”  That refers to the time when Fosse will succumb to a heart attack in 1987, dying in Verdon’s arms en route to opening night of a revival of Sweet Charity.

First, though, a tremendous amount of living must be done.  Fosse remains the record-holder of Tony Awards for choreography (eight).  He also won an Oscar for directing Cabaret and Emmys for choreographing and directing Liza with a “Z.”  Verdon was not exactly a slouch; she won four Tonys and consistently delivered show-stopping performances.

Within the first minute of these eight hours, there’s a shot of Fosse arranging Verdon’s body -- not as her lover, but as a choreographer, who moves dancers’ limbs as an architect shifts rooms’ angles, in service of perfecting a vision.  While dance was their shared language, the series resonates with those, including Rockwell, who doesn’t begin counting “5-6-7-8,” as dancers do.

“I became aware of Fosse as a kid with [the movie] Star 80,” Rockwell recalled.  “I knew him more as a director of straight movies, and then I find out about the musical side of him.  He felt he had to prove he could do it."

Like all great artists, Fosse was always challenging himself and dissatisfied even while collecting awards. Rockwell portrays him as someone unintentionally cruel; he merely assumes everyone exists to serve him. Fosse’s raw talent was an aphrodisiac, which helps explain why so many women ignored the ridiculous comb-over to sleep with him.  The man subsisted on pills, booze and cigarettes.

“He always had a cigarette in his mouth, and he had the Friar Tuck comb-over, and he did very well with that look," Rockwell noted.

Since Rockwell had been a smoker, he told MediaVillage, that part wasn’t too difficult.  To move like the master, however, required work.  Rockwell learned from those who danced in Fosse’s productions.

This sort of meticulous detail extends through the production.  When Verdon’s applying makeup backstage, the can of Aqua Net and the powder puffs on the vanity are of the time, as is Fosse’s attitude toward women.  It was a different era.  Executive producers including Lin-Manuel Miranda had discussed if now was the right time to tell their story.

“There are so many troubling aspects of this story,” executive producer Steve Levenson acknowledged of Fosse’s habit of bedding dancers.  “It was right around then that this incredible explosion of the truth, really, in this industry, in particular, came to light.  It suddenly felt like, ‘Oh, no, we have to tell this story because of that,’ instead of, ‘how are we going to tell this story and not glamorize this?’

“One of the things that I want people to see in this show is there’s this incredible photo of Bob on the set of Sweet Charity directing the dancers,” Levenson continued.  “If you crop it in such a way, it looks like it’s just Bob, this lone white male genius creating this film out of whole cloth, but if you zoom out, you see that Gwen Verdon was standing right next to him directing this other group of dancers.”

That one shot crystallizes their relationship, Fosse in the spotlight, Verdon in the shadow, yet shining brightly.