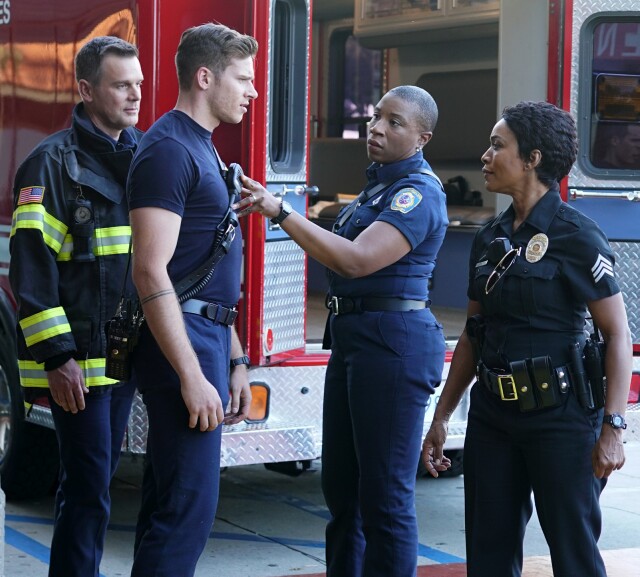 On the surface Fox’s new procedural 9-1-1 looks pretty similar to other shows of its kind. Upon further investigation, however, it seems the network and series creators Ryan Murphy, Brad Falchuk and Tim Minear have put together something amazing.  This new drama about the professional and personal lives of first responders -- specifically the LAPD, LAFD, paramedics and the 9-1-1 hotline operators who dispatch them -- found its legs pretty damn quickly, and it’s got three great leads, an amazing supporting cast and some solid writing to thank for that fact.  Not a bad way to start off the New Year.

The first thing I noticed is how 9-1-1 is essentially three shows in one. The procedurals I know best only show a single aspect of public service (i.e. Chicago Fire, Chicago PD, Law & Order, etc.), but 9-1-1 follows an emergency from the moment the call initially comes in to the moment the situation’s been contained.  It feels fresh and new to me, but this is admittedly a generational observation, because my editor recently told me that 9-1-1 -- which, like Law & Order, draws its storylines from real life -- feels like an updated hybrid of two shows from the distant past: the fictional drama Emergency! (1972-77) -- a show I had never heard of -- and the reality show Rescue 911 (1989-1996), which premiered before my first birthday.

Here’s a spoiler-filled example of how this hot show works.  9-1-1 operator Abby Clark (played by Connie Britton, who should never not be on TV), receives a call from someone claiming they can hear a baby crying in their apartment wall.  Abby dispatches the local LAFD to check it out.  A team of firefighters and paramedics led by the levelheaded and experienced Bobby Nash (Peter Krause) and comprised of charismatic professionals like Howie (Kenneth Choi), Henrietta (Aisha Hinds) and Evan “Buck” Buckley (Oliver Stark), arrive on the scene and proceed to remove said baby from a waste pipe.  Meanwhile, LAPD officer Athena Grant (Angela Bassett) makes her way through the complex in an effort to find the mother of the very recently abandoned new born.  This dynamic is straight up genius.  (Krause, Stark, Hinds and Bassett are pictured at top, left to right.)

Following these situations in and out of the main characters’ lives only reinforces the concept that these people are involved for exactly as long as they’re needed, and more often than not they never find out if that suicidal jumper jumped, or if anyone died in that suburban house fire.  It also allows the viewer a taste of the rift that stereotypically exists between firefighters and police officers.  Nothing better than two uniforms bumpin’ heads, am I right?

The real win here is showing who these people are both at home and on the job, which makes sense because I’d imagine most people behave differently depending on where they’re at in that moment.

9-1-1 operator Abby lives with her mother who requires round-the-clock care due to her late-stage Alzheimer’s.  She mentions feeling more comfortable dealing with the usually life-threatening emergencies she deals with at work than she is when she’s at home taking care of mom, and I get that.  My grandmother passed just over a year ago from Alzheimer’s, and I know that as much as one wants to be there for someone they love, seeing them in that state can take its toll on even the strongest of us.  Alzheimer’s is something that (at least right now) no one can change, so it seems to me that Abby’s ability to affect actual change in the world from her desk every day is a huge deal for her.

Then we have Athena Grant of the LAPD.  She’s tough, takes her job seriously, and takes no one’s shit along the way.  She’s got that “I’ve seen this a million times” kind of vibe that more seasoned officers tend to exude, and when faced with situations that actually require a little police work she seems to err on the side of “leave no stone unturned” -- a helpful trait in her line of work.  At home, she’s got two beautiful kids (one in middle school, one in high school from the looks of it) and a loving husband.  The problem is, her husband doesn’t love her; he loves men, and the kids aren’t taking the news too well.  If nothing else, the way Abby handles her home life reminds us that she’s a human being first, and she’s got stuff going on just like everyone else.

Speaking of everyone else, the pilot spent the most time with the LAFD crew. Captain Bobby Nash has been back in the field for just 18 months after spending some time in recovery because of how he initially chose to cope with the losses one has to take in his line of work.  (His attempt to prevent a distraught young woman from killing herself certainly put him to the test all over again.)

Alas, it seems the bulk of Bobby’s duties will involve tempering the impulsive wildfire that is Evan “Buck” Buckley.  “Buck” -– which Webster defines as “a male animal” or “a dashing fellow” -- is the perfect name for the self-absorbed, tail chasing, inexperienced, yet wildly over-confident character Oliver Stark is playing.  He’s a likable character for the most part, but in the context of an emergency he’s a wildcard at best.

The pilot episode never really lost any momentum, probably because it has enough ground to cover that it has to make its points quickly and concisely while keeping the delivery as organic as possible.  Also, pilots are like that.  But the operator/firefighter/police officer tripod that 9-1-1 is standing on is very strong, and if the art here continues to mirror real life there is every reason to believe that the action and emotional power that carried the first episode will continue.