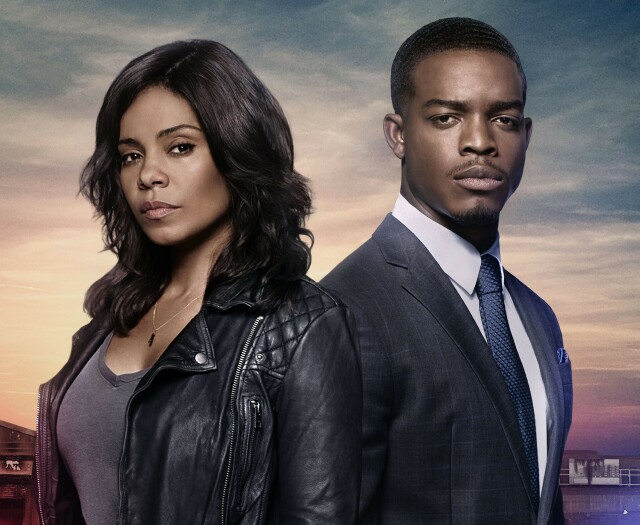 Shots Firedis Fox’s new crime drama -- and honestly, it’s pretty lit. This isn’t a run of the mill cop show. Creators Reggie Rock Bythewood (Notorious, Biker Boyz) and Gina Prince-Bythewood (Beyond the Lights, Secret Life of Bees) use a fresh and clever approach -- tackling today’s social issues through an unbiased lens while flipping said issues onto their ear -- all while utilizing a powerful cast that brings some real-life emotional gravity to these fictional people and events.

Sanaa Lathan (who’s very accomplished, but I recognized her as the hero’s mom in 1998’s Blade) plays Ashe Akino, a rough-around-the-edges DOJ investigator and ex-cop with a rocky past (and present, apparently). Stephan James (pictured at top with Lathan) plays Preston Terry, a by-the-book rookie lawyer also working for the Department of Justice who kind of acts as the show’s moral compass.  Ashe and Preston have been paired by their employer and tasked with investigating the shooting of an unarmed man by a police officer in a small southern town. The twist? Contrary to the unfortunate norm, this time a black police officer has gunned down an unarmed white college student. Now, this one detail may be the only thing separating this fictional incident from the tragic stories seen all too often in our real-life news feeds, but it reinforces the underlying theme that Shots seem to push: These situations should all be looked at objectively before conclusions are drawn.

This idea is further supported by the show’s ability to show every character in multiple dimensions. For example, part of Ashe’s draw is the fact that she’s an outspoken wildcard. While visiting her daughter at her ex-husband’s house, her visit is cut short by his current wife who insists quite rudely that it’s bedtime instead of allowing them fives more minutes of mommy-daughter time. You know, the way a human being would. Normally this is the part where I scream inside while I watch the person on TV just take that kind of blatant disrespect on the chin but, much to my pleasant surprise Ashe doesn’t play that shit. She calmly says good night to her daughter, closes the door, and immediately chucks a vase at the wall behind Mommy Dearest, just missing her head.

Granted, this obviously wasn’t the sanest move in the world, but it felt like emotional justice to watch her throw caution to the wind and react the way any parent would at least want to react in that moment. She’s a rebel in the workplace, too. In classic 80’s cop style, she’s a rebellious badass who talks slick, takes no shit and gets results even if she has to get her hands dirty.

On the flipside, we see over time that whenever she isn’t working she seems to be unraveling. On the job she’s capable and focused, but during every second of her personal life she’s a loose cannon, continually failing to contain the angry and violent outbursts she’s apparently been having since a traumatic incident during her cop days. This makes that little flash of crazy that was initially endearing seem like kind of a red flag, and the fact that it never affects her work suggests these dangerous high-stakes situations are the only times she feels comfortable in her own skin.

The same goes for Preston Terry, who chose a life in the legal field as opposed to the baseball field. His brother, who chose a life of sports, is now a famous NFL player who seems to hold the majority share of their father’s admiration. Turns out this may be the reason for the rift in Preston and his brother’s relationship, and the reason why Preston seems to yearn for his father’s approval. This need to prove himself becomes very intriguing when considered during scenes where he and Ashe bump heads. Yes, he’s a rookie in the law game, and it’s obvious he’s intelligent, clever and confident, but could his confidence be a cover for the fact that he needs to validate his career choice to both himself andhis father? Maybe. I’m no shrink.

The point being made here is that we could’ve easily been fed the usual Odd Couple-y lawyer/cop team up show we always get, but these characters have depth. 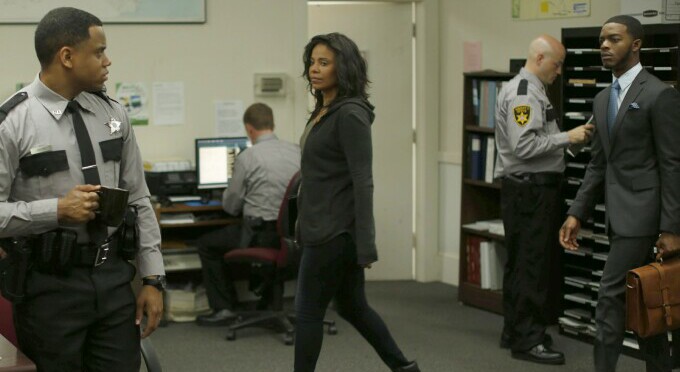 It’s not just them, either. The officer in question, Deputy Joshua Beck (played by Tristan Mack Wilds of VH1’s dope The Breaks, pictured above left with Lathan and James), has so far been depicted as a genuinely good person. In light of the shooting, the media absolutely crucifies him for a leaked video of him making a racist joke the day he received his badge where he called it a “license to kill these crackers.”  This turn of events made me consider the idea that out of all the police shootings in the real world, there have to have been at least one or two instances where the officers responsible weren't racist monsters like the media said, but rather people who were doing their jobs when things went sideways.

Beck’s superior, Lieutenant Breeland (played by True Blood’s Stephen Moyer), seems to have Deputy Beck’s back, but he also has moments where his morality and whether or not he’s a racist become questionable. Aisha Hinds (who plays Harriet Tubman on Underground) is local Pastor Janae James. She, too, initially seems to have good intentions as she attempts to bring the neighborhood together and protest the disparagement of the lower class. Again, given some time we learn that she might be doing all of this in an attempt to build a reputation for herself as a community leader; a realization that muddies the supposed purity of her motives.

I could go all day about the many ways this show has surprised me, but I’d rather people just watched it. If there’s one thing to take away from Shots Fired, it’s the idea that human beings are complicated, and oversimplifying them only adds to the epidemic of dehumanization and prejudice that divides us all today.

Shotsgives you the facts, shows you people -- not caricatures of people -- and allows viewers to make up their own minds. None of the questions or talking points raised take away from the series’ entertaining plot and pace, or the intrigue of its characters. Whether or not this show will ever end up taking a side on any of the issues it presents is an interesting question itself -- and it’s one I intend to answer in a future column.

"Shots Fired" is telecast Wednesdays at 8 p.m. ET on Fox.