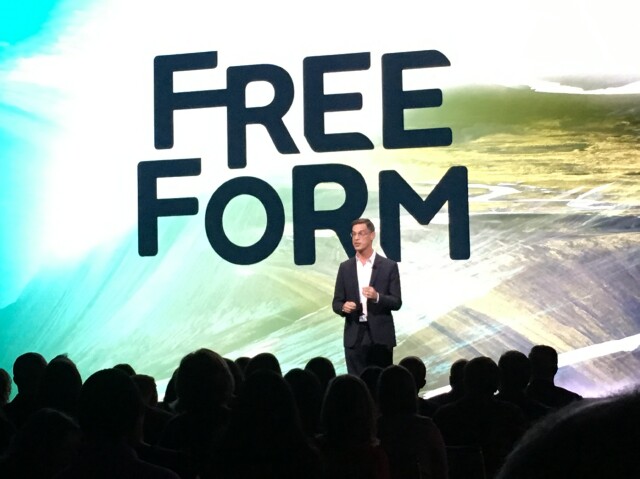 In keeping with a recurring circumstance this Upfront season, last Wednesday night two more cable networks -- in this case Freeform and National Geographic -- went head-to-head with their New York Upfront extravaganzas. They were both winners.  Here's the rundown on Freeform.

Venue: Sir Stage 37 at 508 W. 37th St. for the presentation; Hudson Mercantile a block away on 10th Ave. for the after-presentation action.  Freeform fans gathered outside Sir Stage 37 to welcome their favorite series stars as they arrived by limo.  Simple auditorium setting there, with runway and screen in the center.  Attendees were seated on the main floor, while the stars of Freeform were perched in the roped-off mezzanine.  Disney/ABC Television Group president and Disney Media Networks Co-Chairman Ben Sherwood was among the key Disney and ABC executives taking seats in the front rows.  Over at Hudson Mercantile the party spanned three floors. The ground level was set aside for networking and photo opportunities with the stars from a red carpet on one side, or with colleagues inside a "jungle" composed of white pieces of string hanging from the ceiling.  Food stations were found upstairs on the sixth floor (where the stars were confined to a VIP section) and again in the rooftop penthouse (where the stars freely mingled with the rest of us).  Grades:  3.5 Jacks for Sir Stage 37, 4 Jacks for Hudson Mercantile

Presentation:  After two years of establishing Freeform's identity as a young adult-oriented network, distinct from predecessor ABC Family, the time to cement that identity with participation from other Disney enterprises is now. "Everything around us has changed," acknowledged Freeform President Tom Ascheim (pictured at top). "The TV industry, the audience, how they see what they want to see."  Series like Beyond, Stitchers, Shadowhunters and just-launched Famous in Love demonstrate consistent ability in reaching young adults.  Going forward, expect new scripted and unscripted series to double down on that foundation.  What's more, Ascheim and Disney Ad Sales Executive Vice President Laura Nathanson noted, empowering young women and women of color through relatable lead characters and women in charge behind the camera will get increased focus.  Nathanson reminded the audience that Freeform programming is dominant among young female demographics.  Grade: 3.5 Jacks 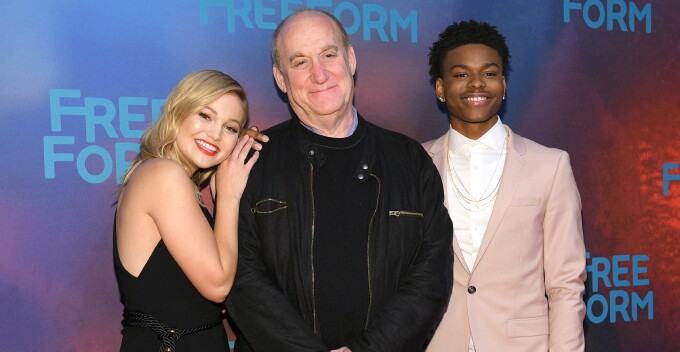 News:  Marvel will enter the world of young adult-oriented series production next year with live-action adventure Cloak & Dagger and the animated comedy New Warriors. (Marvel Television chief Jeff Loeb is pictured above center with Cloak & Dagger stars Olivia Holt and Aubrey Joseph.) Both series will be co-produced with ABC Studios' Signature division. More comedy will come in early 2018 with Alone Together, co-starring stand-up comics Esther Povitsky and Benji Aflalo as best friends in a hostile Los Angeles culture. Andy Samberg is the executive producer. Also, Broad City stars/creators Ilana Glazer and Abbi Jacobson are developing the cartoon Sticksas another 2018 series attraction. On the serious side, mermaids will prey on residents of a coastal town in the chiller Siren, coming next summer. The network will get back into made-for-TV moviemaking in a big way with Life-Size 2 (see below), Angry Angel (from Easy A producer/director Will Gluck) and a set of originals inspired by material from People magazine and co-produced with Everywhere Studios. (The People venture was not announced on-stage, even though it was featured in the post-presentation press release.)  Grade: 4 Jacks

(Editor’s Note: Responses from the audience during the Freeform event offered incontrovertible proof that the advertising community and Upfront audiences are indeed getting younger.  First, there was an audible buzz of anticipation when it seemed for a few seconds that Andy Samberg might appear in person to discuss his new comedy projectAlone Together.  But when a video with Samberg played instead there were groans and sighs of disappointment around the room.  Plainly, Samberg is huge with Millennials.  Also, the audience exploded with happy cheers and applause when it was announced that Freeform will produce a sequel to the 2000 ABC hit movieLife-Size with Tyra Banks reprising her role as Eve, a life-size living doll.)

Host(s):  Ascheim and his colleagues left no doubt how enthused they were about the content on display, while keeping the pace up.  Grade: 3.5 Jacks

Star Time:  From Tyra Banks to the casts of Pretty Little Liars and Famous in Love, the Freeform starlight was blinding. Plenty of on-point laughs during opening performance by comedienne Iliza Shlesinger, whose new Truth & Iliza talk/variety half-hour debuts on Freeform May 2 at 10 p.m. ET.  One choice quote:  "No one talks to women my age in a fun, informative way.  I'm an elder Millennial (at 34). Let me tell you the tale of Snapchat." Grade: 3.5 Jacks 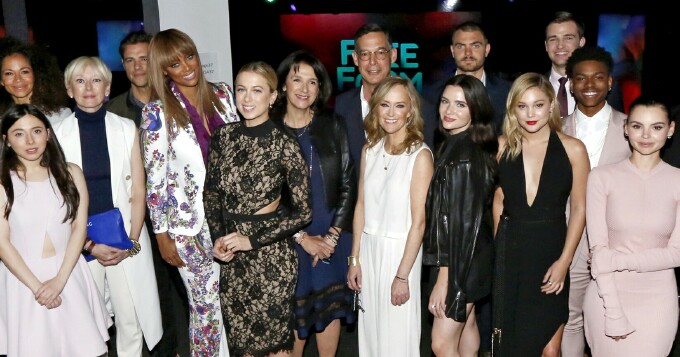 Data Insight: From Nathanson: “This year, 94 million people watched over 19 billion minutes of Freeform content.  [Editor’s note: In other words, in the Snapchat, shattered attention-span era every minute counts!]  “Our offerings go beyond our linear telecasts.  Our fans don’t just sit back and watch.  They watch online, they post, chat and connect with our shows on a daily basis.  Accordingly, our digital video views have grown significantly and our social army continues to grow.  In fact, with over 467 million social engagements in 2016 alone, we remain the most socially engaged TV network.”  Social media usage among the network's viewers is up 40 percent over the last year.  Grade: 3 Jacks

Innovative Opportunity:  Summer Fling, a two-day festival of music, pop culture exhibits and celebrity/fan get-togethers next summer, location and dates to be announced.  In addition to event participation, advertisers can play a role in digital/social media coverage of the festival, and/or a Freeform special on the second night.  Grade: 4 Jacks

Overall Grade: 3.5 Jacks  Well-produced showcase from start to finish, leaving no doubt how Freeform wants to move with both its young adult audience and Disney alliances.

Next up: National Geographic’s FurtherFront