FreeWheel Connects Now, Next and Beyond TV 2021 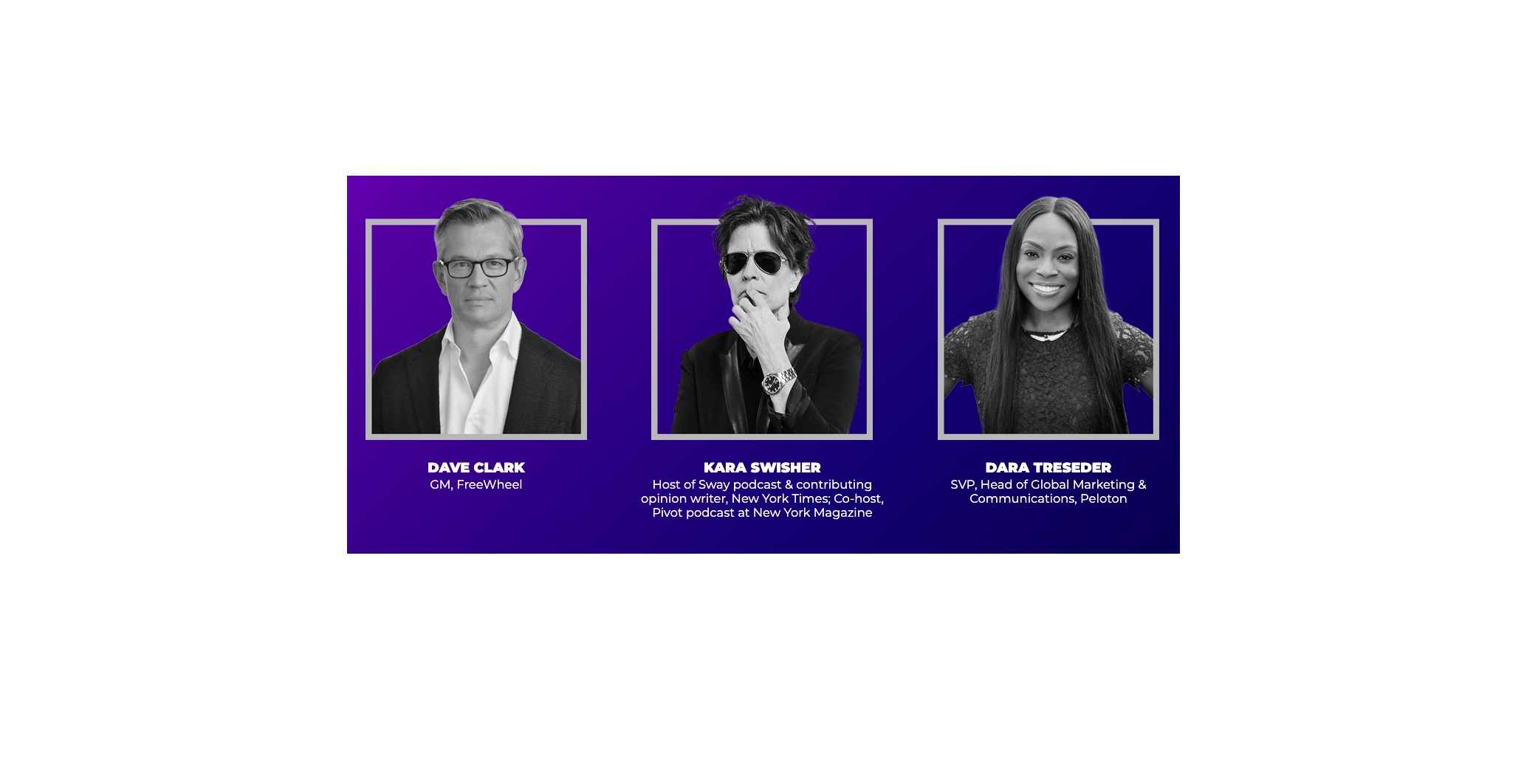 What will the TV medium's path to a next normal look like? When this year reaches its conclusion this coming December, will that next normal be reached or exceeded?

Some provocative answers to both questions turned up during "Now, Next & Beyond 2021," the first "FreeWheel Connects" virtual event of the year, organized by Comcast's FreeWheel advertising platform. Joining FreeWheel General Manager Dave Clark to engage with the topic at hand: Kara Swisher, the former editor-in-chief of popular technology website Recode, and Dara Treseder, Peloton's senior vice president and head of global marketing and communications.

"This is not going to be normal. Nothing's going back," Swisher declared when Clark asked for recommendations over what TV executives should think about this year. The coronavirus pandemic "has accelerated trends which were happening already. In six months, things have moved forward that would have moved forward in 5-10 years."

"Companies should focus on innovation and growth, and sensitivity to employees," continued Swisher, now serving as a contributing opinion writer to The New York Times, while hosting a pair of tech/media-centric podcasts. "Use the pandemic as an opportunity to reevaluate your life."

Over the last year, Peloton has expanded its core business of cycling machines connected to interactive video content. The company's library of fitness and exercise programming, from running to dance and Pilates, is now available 24/7 on Amazon Fire TV,Roku and other smart TV-connected devices, with new episodes added regularly. For Treseder, making the content as fun, pleasurable and empowering as possible is the key to growing Peloton's audience, while tapping into the needs of specific communities.

Those qualities can be critical for content and media ventures to reach next normal status, Treseder pointed out. "People are accepting the idea of connected fitness. If you put your members first and you can be creative, you're in a better position to be successful in your business."

"It's important to be a steward (with) a focus," Treseder added, "and to be aligned with a purpose. You have to be a purpose-driven brand instead of a cause-driven brand."

Peloton "is one of those brands where people feel like they have a relationship," Clark noted. "We admire the way you're using your platform."

Netflix is the model to track for TV's future beyond 2021 -- mega-content portfolios circulating worldwide with the widest variety of formats and audiences watching them. According to Swisher, "You have to focus on what consumers want. What experiences they want. You have to think hard about who you should be in this new environment."

However, success in this next normal -- whether becoming a mega-content player or running a niche or set of niche services distributed through smart TV sets and gadgetry, must also come with deeper respect for those general or niche audiences. "Let's push toward compassionate, inclusive capitalism," Swisher said.

In her job, Treseder is spending more time with TV and other media companies, encouraging them to be more accountable with their business practices along with their audience focus. "Holding people's feet to the fire…is an important thing," she went on. "We can all agree certain things are not right -- anti-Semitism, racism. It's important to hold fast, and brands need to be accountable."

Treseder called the arrival of other fitness TV enterprises, such as Apple Fitness Plus, a compliment on how well her organization is doing. "We have a robust catalog of amazing content. Imitation is the highest form of flattery."

Clark invited every executive in TV to discuss what Swisher and Treseder raised during the session. "Keep the focus on the consumer. Every minute," he suggested. "Innovation is hugely important."