From Bob Greenblatt to Miracle Workers: Blue Carpet Interviews from the WarnerMedia Upfront 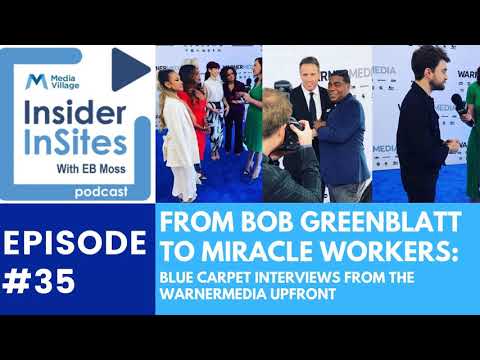 A year after covering the Upfront arrivals on the blue carpet for then Turner Networks I was back to grab both business conversation and banter with the stars and star execs of the now larger entity, WarnerMedia.  This 20-minute episode of the podcast is a quick series of chats with everyone from the Chairman himself, Bob Greenblatt, and President of Ad Sales, Donna Speciale, to celebs and showrunners across the properties.  The transcript below has been edited for clarity so listen here to get all of their valuable comments and quips.  Even better, please subscribe to Insider InSites wherever you get your podcasts (Apple, Spotify, iHeartRadio, GooglePodcasts, Stitcher or TuneIn).

First up, Donna Speciale exhibited the same poise and patter as she had in presenting at the previous day's XandrFront.  In this year's brief interview from the carpet, Speciale shared in a nutshell the forthcoming presentation (the reach of their linear offerings, SVOD and AVOD) and explained more about Xandr's new "Community."  "It's everything we've been talking about with this vision for five years at Turner," she said.  "Now being WarnerMedia and with the Xandr collaboration, AT&T ... will be bringing not just WarnerMedia but all publishers' premium video, with digital in the beginning, but then obviously all the linear ... a holistic community for publishers where buyers and sellers can transact.  Community also brings what no other platform has -- AT&T data access to any of the buyers and sellers who want to use that platform."

Referencing the recent interview with Tyler Moody about the WarnerMedia podcast network, I asked Speciale if she saw more dollars going to that vehicle this year.  "We are," she confirmed.  "This year, I started a small sales organization to actually just focus on podcasting.  It's still a little bit in its infancy stage but there're definitely dollars there.  I also think it's interesting for podcasting that sometimes linear programming pushes into podcasting, but sometimes podcasting starts the creative and then it goes into the linear aspect as well."

After some serious insights about the volume of performance vs. brand marketing, Speciale gave a great answer to the very important final question: If she were living in a Friends or Seinfeld type of apartment, which WarnerMedia talent would she most want to live next door to?  "All the women from Claws-- they're frickin' bad ass."

The Full Frontal team behind Samantha Bee -- Mike Rubens, Amy Hoggart (whose own show was just announced) and Allana Harkin -- weighed in on their preferred neighbors, too.  Harkin had a moment in describing the appeal of Shaq (of greenlit TNT docuseries Shaq Life fame and, oh, the NBA).

Back on a serious note, Otter Media Chief Executive Officer Tony Goncalves described how and why they're "at the tip of the sphere of how young people consume content" but also how he was inspired in his own early stage career by our own Jack Myers!  "I'm a big fan of his," Goncalves said.  As I was coming up in this industry, I saw Jack at a conference and I was sort of blown away by the way that he thought and, frankly, the push that he was making for the future of media and media consumption -- all of which we are now living -- and which is, frankly, what my company essentially represents inside of a large media company like Warner."  Props, Jack.

Next, Bob Greenblatt, Chairman of WarnerMedia Entertainment and Direct to Consumer, and arguably one of the best programmers in the business, shared a serious answer and some fun with me.  On marketing the new company, he said, "We're launching a whole new business, so we're going to be spending a great deal of money on all of it ... branding, bringing the shows to market -- original shows, HBO shows, all the content. It's a huge new business for us."

He also put OTT in a different context when I asked him about the most "over-the-top" thing he'd done in his career.  "I guess doing the big, live musicals at NBC," he said.  "Jesus Christ Superstar was pretty over the top, I have to say.  I just wish it was Over The Top literally, but it was a big deal."  And over-the-top in his professional career?  "I've had so many over the years.  I'd probably go back to 20 years ago when I produced Six Feet Under for HBO.  It was really an extraordinary experience."

More talent and execs included Mickey Sumner of sci-fi thriller Snowpiercer and its showrunner, Graeme Monroe, both of whom spoke to my MediaVillage colleague Simon Applebaum -- who was next to me on the carpet -- about the show's message of exploring humanity with the haves and have-nots, and the effort to build a diverse cast and crew.

And finally, I spoke with two angelic cast members from Miracle Workers who, in the show's first season, were working to save the world with Daniel Radcliffe as one of their fellow helpers.  Guess who Karan Soni would pick as a real-life helpmate from WarnerMedia?  Spoiler alert -- but smart guy that he is -- Soni said newly promoted President of TBS, TNT and truTV, Kevin Reilly!

Listen to the full episode to hear why ... and to find out where the next season will take Soni, Radcliffe and fellow cast members.