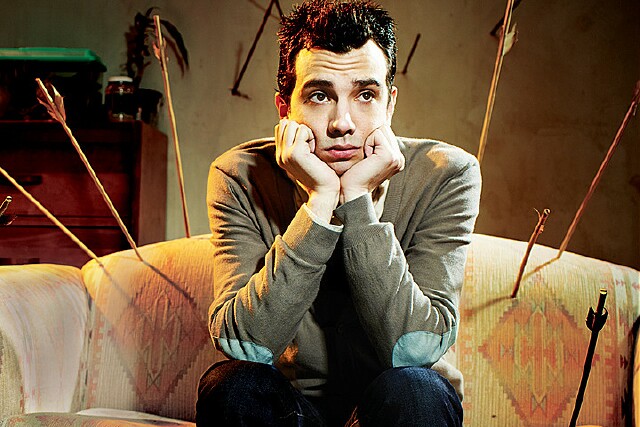 FXX’s romance/comedy/fantasy Man Seeking Woman is a special breed. It grabbed me right from its pilot episode, when hapless hero Josh (Jay Baruchel, pictured above) and longtime girlfriend Maggie (Maya Erskine) had just broken up, and his sister Liz (Britt Lower) set him up on a blind date with her Swedish friend. As it turns out, her friend was an actual green-skinned, dumpster-diving troll.  When Liz said, “She’s from Sweden” what she really meant was, “She grew up in a Scandinavian forest.”  If this happened in real life – that is, if there were green-skinned, dumpster-diving trolls moving among us -- Josh, along with every other patron, would have run out of that restaurant in terror at the sight of a literal monster. But in the show, the only person who seems to mind or even notice is Josh, and even then, he treats it like a minor inconvenience – the same ol’ same old -- as opposed to treating it like a sign of the apocalypse, which he should have.

As you may know, the cast of Man Seeking Woman recently appeared at the Winter 2017 Television Critics Association tour. (Jay Baruchel, Eric Andre, Britt Lower and Katie Findlay are pictured on the TCA stage below.) I wasn’t there, but while I’m sure it was dope, I think they should have brought the troll. 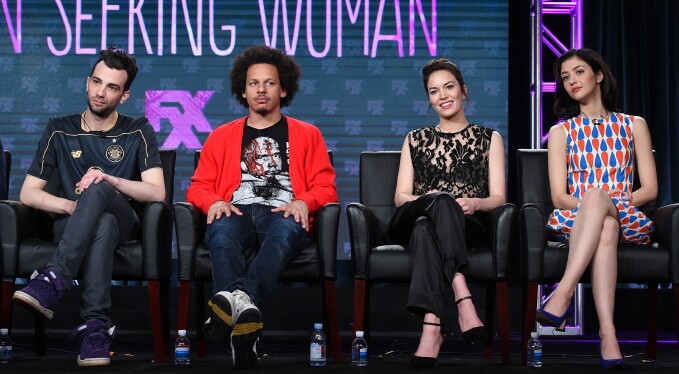 Anyway, wack shit continues to happen to Josh no matter what he does.  No one in his reality ever acknowledges how outlandish the events happening are or, sometimes, the fact that they’re even happening at all, although sometimes they do.  Regardless, everyone behaves with the kind of emotional sincerity appropriate for the real-life counterpart of whatever situation Josh’s narrative has brought them into.

During the show’s first two seasons I resigned myself to the idea that when things get weird what we’re seeing aren’t the actual events that are transpiring, but rather visualizations within Josh’s story and all its emotionally-charged embellishments. That’s why no one notices all the odd stuff, like when Maggie was dating a 125-year-old Hitler who was a hit at dinner parties. Um, she didn’t date the real Hitler, of course -- just some dude that Josh hates so much that he refers to him as such.

Josh isn’t the only one whose emotions get visualized on the series, as evidenced by scenes, plotlines and occasionally entire episodes that follow other pivotal people in his life.  Liz, Mike, Josh’s mom Patti (Robin Duke) and her husband Tom (Mark McKinney) all take turns having moments in the limelight.  Liz, however, seems to be the only one who’s had an almost completely Josh-less episode. Everyone else’s stories are usually Josh-centric, regardless of how often he shows up or doesn’t, but Britt Lower has shown that she is more than capable of carrying an episode alone.

It’s a very creative approach to the more common love stories we’re often told, and the fact that the show’s visual effects team never fails to take their silliness seriously really sells it.

If the unique point of view and professional execution of Man Seeking Woman is a house, then the cast and their performances are the foundation it sits on. Baruchel and Co. do a phenomenal job bringing the numerous well-written sibling, friend and familial relationships to life. They also do a great job of remaining convincing in the face of the ever-changing characteristics of their characters – not to mention the bizarre things that happen in any given episode. Whether Josh’s homemaking mom ends up being a late night talk show host, Liz ends up being the badass leader of a rebellion, or Josh’s best friend Mike (the great Eric Andre) ends up being an alien overlord’s sex slave, their level of commitment remains the same.

The premiere episode of season three changed things up a little with the introduction of Josh’s new girlfriend, Lucy (Katie Findlay). Normally, the show revolves around the continuous failures of Josh’s love life, with the only departures being to explore the lives of his immediate friends and family.  In this episode, though, Lucy’s having a particularly bad day that ends with a date with Josh.  They seem to have fun, and when asked how her day went, she replies “good,” with a smile.  WTF?, you may ask. How can that be?  We’re talking about one of Josh’s dates here.

The rest of the episode is about Lucy and her roommates dealing with Josh’s constant presence in their apartment.  Josh has had other girlfriends in the past, but those relationships never lasted more than an episode or two.  This episode opened with this relationship, and being that it was the season premiere, I’m guessing it will be the main focus, at least for a while.

Series creator and executive producer Simon Rich, the rest of the writers and the show’s many directors have found a unique way to tell a common story. As long as FXX keeps giving them the go-ahead to be as unhinged as they want to be, the sky’s the limit.