General Motors and Subaru Set the Pace for Pride 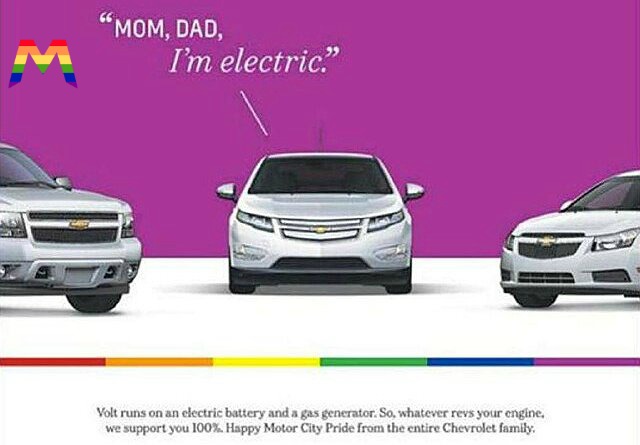 If the battle was to get automakers to recognize that a) they have gay customers who buy a lot of cars and b) that LGBT consumers will go elsewhere if a given company’s hiring and retention practices don’t match its ads and public rhetoric, then it has probably been won.  According to GayWheels.com, which was founded in 2005 to combat bigotry in the auto industry, “We’re happy to report that [as of September 2018] all major automakers doing business in the U.S. now meet the minimum standard for classification as LGBT-friendly.”  The site’s focus has become putting the spotlight on carmakers that have “gone the extra mile” to, among other things, prohibit discrimination on the basis of gender identity and offer medical coverage for transgender employees.

A 2009 survey from GayWheels.com and Sorgenfrei revealed that 67 percent of both gay male and lesbian car buyers consider it “very or somewhat important” for auto companies to exhibit a “gay-friendly” reputation -- defined, in part, by whether they offer domestic partner benefits to their employees.  Automakers know this now. The annual Corporate Equality Index, sponsored by the Human Rights Campaign Foundation, gave perfect scores in 2018 to GM, Subaru, Ford, Fiat Chrysler, Toyota, Nissan, Hyundai, Tesla and Volkswagen.  It hasn’t always been this way.  As recently as the 1990s, few automakers would cater to or dialogue with the LGBT community.

Two companies deserve credit for leading the way.  In talking to dealers at a Comcast Automotive Advisory Council event in Philadelphia on May 15, I told them, “Automakers can and should use TV ads to reach specific auto-buying communities, including the large LGBT populations.  This approach has worked very well for Subaru and General Motors.”

General Motors targets gay buyers in its commercials.  Back in 2015, a Chevrolet spot called “The New Us” was aired during the Olympic games.  It highlighted a Chevrolet Traverse and 12 families -- two of them clearly gay.  Automotive News called it a marketing breakthrough.

But sensitivity to the LGBT community had begun earlier.  In 2012, GM had slipped to 85 percent on the CEI index, which may have been because of a perceived lack of protection for transgender employees.  In fact, said Eric Peterson, then GM’s Vice President of Global Diversity, those protections actually existed but weren’t made clear.  “We have the appropriate coverages in place,” Peterson said at the time, “but they aren’t stated very specifically within all of our benefits.  That’s being corrected.”

By then, GM was actively working on courting the gay community and staking out a presence at LGBT events.  It had hired Joe LaMuraglia, Founder of GayWheels, to be its LGBT liaison in 2010.  He held that position for six years before being promoted to Chevrolet’s East Coast Brand Communications Manager.

Small gestures reaped big rewards.  In 2012, an ad that featured a Chevrolet Volt “coming out” as battery powered (“Mom, Dad, I’m Electric”) ran in Between the Lines, a Michigan LGBT newspaper during Motor City Pride events (see image at top).  When it was picked up by social media, it got 11 million views. 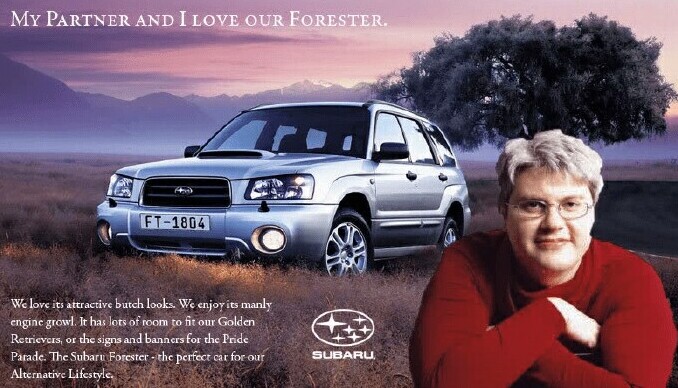 Subaru’s is a fascinating case of an automaker seeking niche markets -- kayakers, hikers and other outdoorsy types -- and finding a lasting alliance it didn’t expect.  Back in the 1990s, Subaru discovered that lesbians were buying many of its cars, so it began creating lesbian-themed ads, as well as those targeting other constituencies, such as medical professionals.  Tennis giant Martina Navratilova was hired as a spokeswoman and was even put on billboards.  By 1996, the ads were appearing in both mainstream publications and the gay press.  It was uncharted territory.  A 1994 IKEA ad featuring a gay couple earned a boycott from the American Family Association.

Subaru was the first sponsor when Navratilova launched the Rainbow Card in 2000 with marketing firm, Do Tell.  There was more: the B9 Tribeca model was launched with the slogan, “Room for Seven.  Or Whatever You’re Into,” and license plates like “P-TOWN” (for Provincetown, a popular LGBT destination) appeared in the print ads.  Subaru became a sponsor of the Showtime series, The L Word.

By 2009, Subaru was the No. 1 brand among gay and lesbian buyers, according to another GayWheels.com/Sorgenfrei survey.  And the company didn’t lose its straight clientele, either.  Subaru sold a record 216,652 cars in the U.S. market in 2009.  Reports Bloomberg, “By courting financially solid buyers with a taste for the quirky, tiny Subaru of America sped through 2009 logging record sales and market share along the way.  Last year Subaru became the 11th most popular U.S. auto brand, up from No. 19 just a year earlier.”

Subaru and GM were pioneers, and what was once daring is now mainstream.  No automaker can afford to ignore the LGBT market in 2019.  “Money talks,” reports The Advocate, noting that “more than 75 percent of LGBT adults and their friends, family and relatives say they would switch to brands that are known to be LGBT friendly.”  No automaker wants that to lose the economic clout of American LGBT buyers, who had an annual consumer buying power of more than $917 billion in 2017.