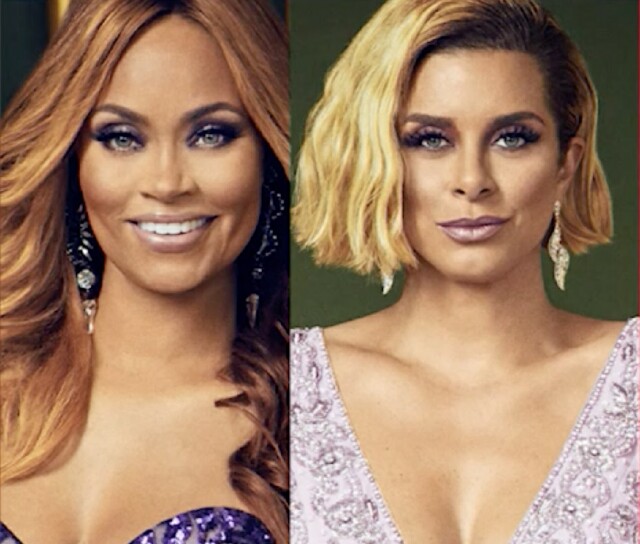 The latest webinar in the iHeartPodcast Network Speaker Series featured entrepreneurs, reality TV stars and now podcasters Gizelle Bryant (pictured at top, left) and Robyn Dixon (top right) in a candid conversation about the never-ending drama on The Real Housewives of Potomac, their views on the increasingly popular podcast medium and their partnership with The Black Effect Podcast Network and iHeartMedia to bring their podcast "Reasonably Shady" to life.

"Reasonably Shady" features casual chats with the two reality stars ranging from dating and relationships to marraige and motherhood.

Moderated by iHeart Digital Audio Group CEO Conal Byrne and The Black Effect's President of Production and Creative Development, Dollie S. Bishop, the webinar began with Byrne asking the two reality stars why they started their podcast. "We've been on The Real Housewives of Potomac for so long, but people still didn't know us as people, they just knew us as reality stars," Dixon shared. "When you're on a reality show, you have to stick to the stories. It's not scripted but we do have to keep some sort of structure to the show. If Mary and Bob have drama, we have to talk about Mary and Bob's drama until their drama is over. We don't get to just talk about 'I can't believe Beyonce wore that dress' or 'Did you hear about the space shuttle that just reached Mars?' We felt like our hands were a little tied."

"It's really just two girlfriends chatting it up.," Bryant laughed. "When doing our reality show, I'm very talkative and outgoing while Robyn is very laid back. But on the podcast, people love Robyn just being herself. I'm so happy that people are getting to know us in a different way."

Dixon explained that when she and Bryant would go on Instagram Live together to chat about random topics or whatever was on their minds, they garnered a very positive reaction from their fans and viewers. "People loved learning more about us, seeing our personalities and the dynamics between us, and we thought, 'How can we keep this going?' A podcast made the most sense." Dixon did, however, admit that she was not an avid podcast listener before they launched their show, and that it was all very new to her when it comes to structure, episode length and the number of episodes they should make. "I had no idea, but I knew that Gizelle and I had something that people would enjoy," she said.

Bishop asked the "Reasonably Shady" hosts where the name for their podcast came from, noting that the word 'shady' is always thrown around to describe different cast members of the Real Housewives franchise. "I wanted to come up with something that spoke on who we both are and how people know us," Dixon replied. "For my 'half' of the title, I was focusing on 'reasonable' or 'relatable.' On a show like Housewives, I'm not the one living in a multi-million-dollar mansion with a bunch of cars, talking about how amazing I am. That's not me. I'm relatable.

"The 'shady' part is all Gizelle,", she added with a laugh. "I have some shadiness to myself, that's why we get along, but her shadiness is more pronounced than mine. Look, I own my shadiness. I come from some shady parents, it's just natural. I don't know how it happened but it's here. My kids are even shady!"

When Bishop asked what type of audience "Reasonably Shady" is for, Bryant had this to say: "While we've had a lot of the Housewives fans listen to our show, it's a lot of ladies and girlfriend groups. Anywhere from 25- to 55-year-olds who are smart, fun and want to have a good time." Dixon added that a male colleague of hers told her that he's a fan of the show. "Yes, it's lots of ladies, but we've got some men trickling in," she revealed. "They want to hear what we're talking about!"

Bryant noted that despite knowing her co-host and co-star for years, the two still learn something new about each other every time they record a new episode. "When we start talking about college life, growing up, our backstories, there is always something new," Bryant said. "Robyn never fails to shock me. There's so much I never thought she'd have done, but she's done it!"

Bishop, who is the President of Production and Creative Development for The Black Effect podcast network, then asked Bryant why they chose to partner with them to create their show. "I wanted wherever we landed to be special and to feel like a good fit and this partnership with The Black Effect is a perfect fit," she replied. "There wasn't anyone like us on the platform. It makes us feel special and that you all wanted us on the platform because you were missing our 'flavor'."

The Black Effect, which recently celebrated its first year in operation, was founded by renowned radio and television personality and author Charlamagne tha God in partnership with iHeartRadio to fill the void of Black representation in the podcasting world. The podcast network's vision is to amplify, elevate and empower emerging and established talent, and has a varied catalogue of podcasts covering politics, entertainment, music, social justice, sports and more.

"It's been an amazing project for us to be a part of," Byrne shared. "It feels like what Dollie and Charlamagne keep getting right is finding creators like you and just letting them do their thing as opposed to saying, 'We need you to do this to fit into our mold and vision.' You just let them be."

Byrne asked the "Reasonably Shady" hosts why they think the podcasting medium has blown up so much, so quickly, noting that recent mediums, platforms and technologies, whether they be new streaming services or tech like virtual reality, have struggled to find their footing and hit mass reach. "It's the realness of it," Bryant said. "When people buy into these shows, they get a sense of authenticity. Robyn and Gizelle are Robyn and Gizelle. We're not here to be somebody that we're not. When it's fake, people can feel it."

"I think it's also the variety of podcasts," Dixon added. "You've got everything from relationships to money to cooking to pop culture. It's awesome that the listener can tailor what they want to listen to without the strict regulations of television or radio. It's the flexibility and freedom that podcasters have. They can say what they want without being censored or heavily edited. It makes the listener feel like they're sitting in their living room with the podcaster having a one-on-one conversation. People are eating it up and I love it!"

New episodes of "Reasonably Shady" are available to stream on Mondays on iHeartPodcast, The Black Effect Podcast Network and other podcast platforms.