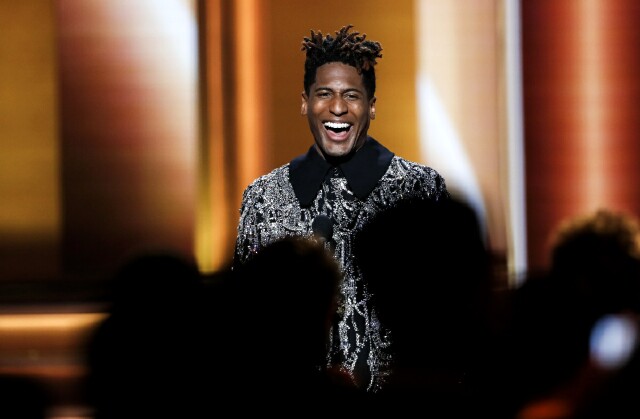 A week after the shambles of the Oscars suggested that live awards shows altogether were a relic of the pre-pandemic past, the 64th Annual Grammy Awards Sunday showed that celebrity event could be staged with thought and excitement, maybe by treating it as an uplifting showcase instead of an ego-filled night of self-congratulations.

From the beginning, genial host Trevor Noah, who avoided any jokes that might trigger bad behavior, admitted that the event, delayed from January due to COVID precautions, was not really an awards show at all. "This is a concert where we're giving people awards," he said early on. "We're going to be singing, dancing and keeping people's names out of our mouths."

That was the only reference to the ugly Will Smith outburst of violence against a mild Chris Rock joke at the Oscars that consumed most of the week. Noah, not given time for much of a monologue, only joked about Olivia Rodrigo being too young for the "Drivers License" she sang about; or Lil Nas X actually being taller than the O.G. rapper Nas (both of whom eventually performed).

The high quality of the acts may have been further enhanced by the fact most of the singers in primetime these days comes from amateurs on reality competitions. Professionals generally get shunted to late night if they're seen at all.

But there was also a hopefulness, too, to the night's biggest songs. Multi-talented New Orleans artist Jon Batiste (pictured at top), bandleader for "The Late Show with Stephen Colbert," came into the event with the most nominations -- 11 -- and walked away with five wins, the most of the night, including the coveted album of the year for "We Are." His humble acceptance of it came shortly after a splashy, stirring performance of his single "Freedom" (also the soundtrack for a Gap ad).

It echoed the evening's most unexpected event -- a direct message from Ukranian president Volodymyr Zelensky followed by a performance of John Legend's own yearning "Free," surrounded by a Ukrainian musician, singer and poet.

"Our musicians wear body armor instead of tuxedos," Zelensky said in the message recorded in a bunker two days earlier, an urgent and compelling moment, compared to the Oscars, where the war went unmentioned for its first few hours.

There was room for lots of winners in the show. Silk Sonic's "Leave the Door Open," practically a parody of '70s soul from Bruno Mars and Anderson Paak, won record and song of the year. "In the industry, we call it a clean sweep," said Paak, staying in character in his Beatle wig and show-bizzy stance.

The former Disney channel star Rodrigo, 19, won best new artist and best solo pop album for her "Sour." (She thanked her mom.) Doja Cat ran from the restroom to grab her win for best pop duo with SZA, who hobbled up to the stage in crutches. (She had fallen out of bed that morning, she said.) Lady Gaga, one of those whom she beat in the category, helped navigate her dress as SZA ascended the podium.

It was definitely the pop that had the ear of the youth-targeted show, with much made of the first Grammy performance from K-pop stars BTS, a striking presentation from reggaeton star J Balvin, and a strong performance from onetime Grammy darling Billie Eilish. Eilish, who went home empty-handed, wore a T-shirt picturing Foo Fighters drummer Taylor Hawkins, who died on tour March 25.

A slot where the Foo Fighters were to have performed was replaced by a salute to Hawkins, followed by a stirring In Memoriam segment capped with a salute to Stephen Sondheim sung by Ben Platt, Cynthia Erivo, Leslie Odom Jr. and Rachel Zegler.

There didn't seem room for performances from heritage artists any older than Nas, 48, who performed four of his anthems; or Lenny Kravitz, 57, who backed H.E.R. and presented the final award. Joni Mitchell, 78, appeared to help introduce Brandi Carlile with Bonnie Raitt, 72. Tony Bennett, 95, who retired from singing last summer, appeared via tape only to briefly introduce Lady Gaga to sing some of the standards they had recorded for their "Love for Sale" duet album -- which ended up winning best traditional pop vocal album, one of more than 75 awards given before the telecast began in Las Vegas.

While there was some focus on country in the telecast, with songs from Chris Stapleton, who swept the category with three Grammys, and late show performances from Carrie Underwood and the Brothers Osborne, who picked up their first Grammy, there was no real attempt to try to showcase other fields of music being honored, from jazz to classical.

And when they did present performances from music as varied as bluegrass, gospel and tropical fusion, Billy Strings, Maverick City Music and Aymée Suárez were seen playing for a few moments in and out of long commercial breaks from atop the roof at the MGM Garden Arena. It seemed as though they were literally kept out of the building.

But having some of the featured acts introduced by some of the background industry professionals, from road managers to costume supervisors, lent a shot of authenticity, and some nervous speakers, to the proceedings.