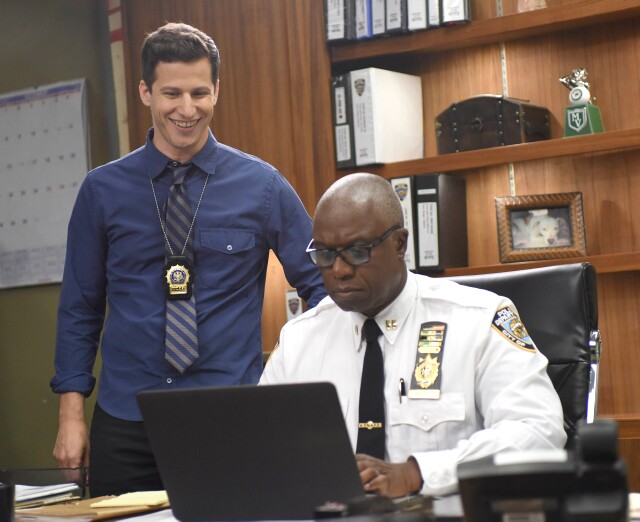 I’m not usually very open to the idea of watching new television shows. I like what I like, and don’t normally venture outside of my circle of favorites too often. So, when Brooklyn Nine-Nine came along I initially wasn’t widdit. Other shows -- New Girl and Community, among others -- were enough to keep me content. Then I found Hulu, and after binge-watching over 70 episodes and forgetting what the sun looks like, I found myself thinking: If I were a critic, Brooklyn Nine-Nine would definitely be my choice for Best Network Comedy of 2016 – probably because I saw every episode to date this year, so it’s all fresh. And now I’m a critic, so there's that …

For those of you who have been living under a rock, Brooklyn Nine-Nine is about Detective Jake Peralta (Andy Samberg), a mischievous but talented jokester who has to adjust to a new captain, the very serious and stern Raymond Holt (Andre Braugher). Peralta’s partner, Santiago (Melissa Fumero) is a pretty, straight-edged detective with a severe case of teacher’s pet syndrome. Then there’s Detective Rosa Diaz (Stephanie Beatriz), who’s as sexy as she is terrifying; Lieutenant Terry Jeffords (Terry Crews), who’s as muscular as he is by-the-book, and Gina Linetti (Chelsea Peretti), the hilariously self-centered office administrator. Hitchcock and Scully (Dirk Blocker and Joel McKinnon Miller, respectively) are the dimwitted resident veterans in the precinct, and the lovably loyal Charles Boyle (Joe Lo Truglio) rounds out the roster as Jake’s best friend at the 99th Precinct in Brooklyn, New York.  (Fumero, Crews, Braugher, Beatriz, Lo Truglio and Peretti are pictured below, standing left to right. Samberg is seated in front.) 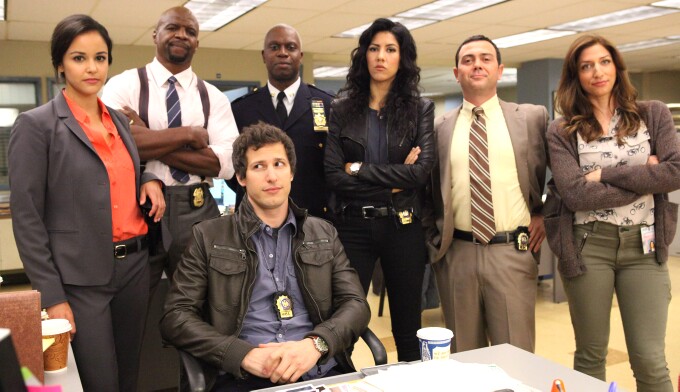 This is one of those comedies where every moving part is vital. From the hilarious cold opens to the evolving relationships and ever-growing backstories, every move is made with the intention of teaching you a little somethin’ somethin’ about each character. For my money, Captain Holt has some of the funniest interactions in the whole series. Because of his strict nature and monotone delivery, any break from his normal characteristics has a huge impact. Seriously, anytime this dude laughs, emotes, or does anything that makes him a little less wooden and a little more like a real boy, it makes me appreciate him just that much more (and understand just how much he deserves those two Critics’ Choice Awards he has won to date for the role).

Raymond Holt is an openly gay African-American who fought his way up through the ranks of the New York City police department – in the ‘80s!  Remember how progressive the country was in regards to sexual identity and racial equality in the ‘80s?  Exactly. Holt commands my respect as a Law Enforcement Professional, and Andre Braugher commands my respect as an actor. (See the monologue Holt gives in the season two episode The Mole when Scully asks him “Are you okay?” and you’ll feel me.) Captain Holt is seriously one of the best things to ever happen to TV.

Jake’s persona is the most obvious, and it doesn’t change too much over the three-and-a-half seasons that have been telecast so far. Being a cop has been Jake's dream ever since he first saw Die Hard as a kid, and he achieves that dream, but never actually grows up. That's why everything he does is hilarious, because he's basically a 12-year-old in a grownup’s body running around like Tom Hanks in Big. He’s still a great detective, as well as the primary source of silliness in the bullpen, with Boyle being a close second.

Boyle has changed a ton since season one. Originally, he was on a constant search for love, which included being romantically interested in Diaz (an idea that was entertained for a few episodes, but ultimately abandoned) and he even had a secret fling with Gina. (Fun fact: In an awkward turn of events his father and her mother ended up married.) Now, he’s a married man and father, an aspect most recently explored in the season 4 episode Captain Latvia in which, in an effort to retrieve a Christmas gift for his son, he uncharacteristically became a veritable badass.

Hitchcock and Scully, on the other hand, are the Tweedle-dee and Tweedle-dum of the precinct -- although it is mentioned they were great detectives at one point. It’s obvious the show would definitely take a hit without them.

I could go on and on about every character’s integral contribution to Brooklyn Nine-Nine, which in my opinion makes it a testament to the power of ensemble comedy. Some of my favorite TV shows (Community, New Girl, The League, etc.) follow this same formula, and it’s pretty hard to argue with its efficiency. These characters are all pieces of a puzzle, the likes of which just wouldn’t be complete without a single one of them.

No matter what show I’m watching, I like writers to set rules for that show’s universe and stick to them. Brooklyn Nine-Nine does that. No matter how wacky the premise is, how dangerous the case is, or how dire the situation may seem, these cops are the good guys, and they act accordingly, even when they don’t want to. Jake might be mischievous, but he’ll never break the law, and the same goes for the rest of the Nine-Nine. Little things like that make it very easy for me to keep rooting for the good guys.

This show made a fan out of me, and Hulu made that possible. Now if only I didn’t have to wait until spring 2017 for the next batch of episodes.