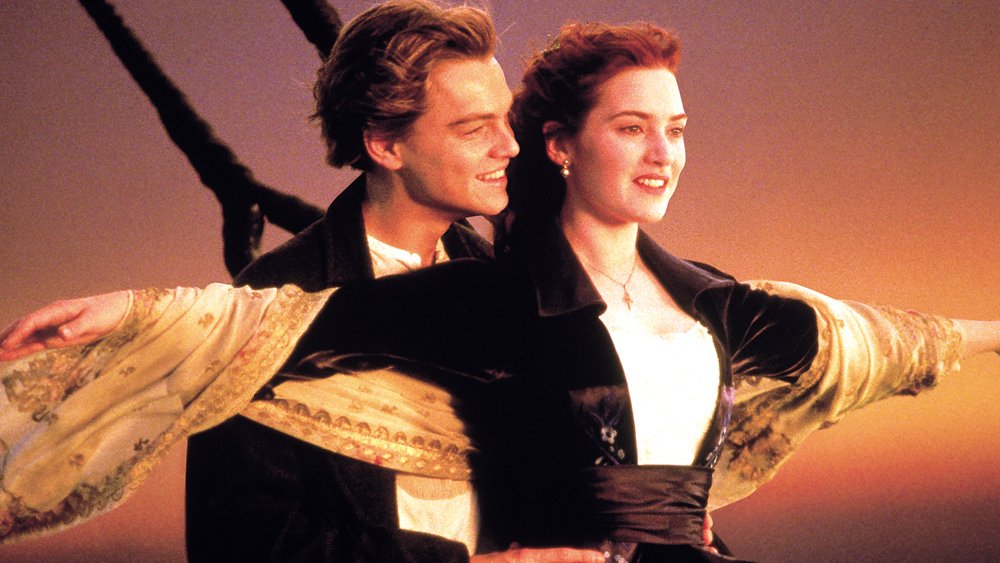 Not the boat, of course; the RMS Titanic, the then-largest ship ever built and dubbed "unsinkable" in the press, set sail from Southampton, England, on April 10, 1912, and went down in the North Atlantic just days later in the early hours of April 15, 1912.

The December 1997 date was the U.S. release of the blockbuster tearjerker about that disaster, starring Kate Winslet and Leonardo DiCaprio and directed by James Cameron. It was the top-grossing movie in America that pre-Christmas weekend, beating out the latest James Bond film, Tomorrow Never Dies. Titanic held that spot for the next 15 weeks and set a record that is unlikely to be repeated. Remarkably, it earned even more in its 11th weekend — $32 million — than it did on its first. (That 11th weekend was Valentine's Day, and Titanic is, of course, a romantic epic, complete with the swelling, soaring Celine Dion song, "My Heart Will Go On." It was the top-selling single of 1998.)

Titanic went on to become the first movie in history to take in $1 billion at the worldwide box office, the second to earn a record-tying 14 Academy Award nominations and the second to win Oscars in a record-tying 11 categories. Cameron himself took home three of them: Best Picture, Best Director, and Best Film Editing. Winslet won, too, for Best Actress.

It also created the phenomenon dubbed "Leomania," a hysteria surrounding its handsome young star, DiCaprio, who turned 22 while making the movie. In a BuzzFeed News essay marking the film's 20th anniversary, writer Sarah Marshall identified Leomania as a "level 3 crush pandemic." According to standards set by the Center for Disease Control and Prevention for real outbreaks, level 2 requires direct contact for infection, but a level 3 hazard spreads through the air.

Marshall's piece cited a young girl in Italy who'd watched Titanic more than 50 times to see DiCaprio's Jack Dawson. In London, 22 people were nearly trampled when a mob of 5,000 Leo fans stormed the premiere of his Man in the Iron Mask. Marshall noted that in television appearances promoting Titanic, Winslet was typically asked about her work, the production, acting. DiCaprio, on the other hand, was treated as a starlet. "Give 'em a wave, Leo," Mary Hart prompted him on the Golden Globes red carpet, as shrieks rose around them.

In 2012, with its 3-D re-release, Titanic crossed $2 billion at the global box office, only the second movie to do so (the first being Cameron's 2009 sci-fi fantasia, Avatar).

And yet, during Titanic's production, many were convinced the movie would sink.

Titanic was entirely Cameron's vision. His obsession with the cruise ship's tragedy grew after watching a 1987 National Geographic special on the lost ship's discovery; he jotted some notes about a movie idea. Although he'd proven himself a very capable sci-fi and action director with mega successes such as the first two Terminator movies, Aliens, and the Arnold Schwarzenegger-Jamie Lee Curtis action comedy True Lies, he'd never before taken on a love story. He convinced 20th Century Fox Chairman Peter Chernin to green-light his project and got a $110 million budget by agreeing to give back $4 million of his own salary. He knew that budget wouldn't be enough, but he was determined to move forward.

His plans required building a new, 40-acre studio along the Pacific coast in Mexico. It featured a 17,000-gallon tank, and inside it, a 775-foot, 90-percent-scale replica of the famed ocean liner. Cameron's obsession with detail meant that each time he reshot the sinking first-class dining room, it was raised out of the water, dried out, and reset with 1,800 pieces of silverware. With so many night scenes, shooting days ran to 20 hours long. DiCaprio and Winslet spend untold hours floating in a tank full of cold water that was pumped in from the Pacific. (The crew eventually started heating it.)

Cameron blew through his budget and his deadlines. Titanic's release date, scheduled for July 1997, slipped to December. Its budget nearly doubled to $200 million. When a 20th Century Fox executive came to Mexico to try to rein Cameron in, the director refused. There was nothing the studio could do: with so much invested, they couldn't very well fire him.

Editing was just as arduous, according to Cameron's version of the creation story. An excerpt in The Hollywood Reporterdetails how the turning point came when Paramount chief Sherry Lansing, whose studio was co-producing with Fox, came to watch a rough cut at Cameron's Malibu home. She loved it.

A few months later, so did audiences.