Hot Hulu at TCA: A Hero, a Handmaid, Harlots and More 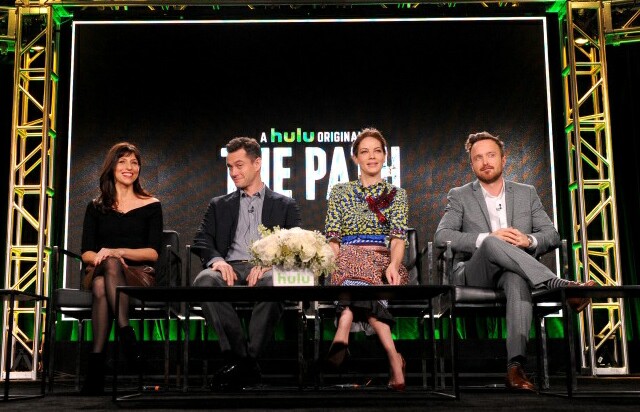 Pasadena, CA – Any residual disappointment over the absence of Netflix and Amazon at the Winter 2017 Television Critics Association tour dissipated on Saturday as the other big streaming service, Hulu, presented a full and very fulfilling day of press conferences and other activities here at the Langham Huntington Hotel.  (In the interest of complete fairness I will note that Amazon provided an executive- and talent-free lunch on the opening day of this tour and made stars from its new series Sneaky Pete available for one-on-one interviews in private rooms at the hotel. But that was it.)  Hulu hit it out of the park, presenting an intoxicating mix of sessions for upcoming series, specials and documentaries; returning series, and other new projects, including its partnership with CMT and Lionsgate to produce an all-new 22 episode season of the long-running broadcast series Nashville.

This is hardly Hulu’s first-time at a TCA – in fact, it was the first streaming service to put together an official presentation during a TCA tour way back in January 2012. But it was arguably its best yet, filling an entire day the way the big broadcast networks generally do (though not always), and it was yet another sign that streamers are not only here to stay but must be taken as seriously as any other television platform. In fact, it might be wise for certain broadcast and cable entities to raise their game when it comes to promoting and educating the press about their shows, especially at TCAs, as it feels as though the streamers are streamrolling right over them, in more ways than one.

The day began with a series of announcements and a review of accomplishments by Hulu’s Senior Vice President and Head of Content, Craig Erwich. Among them: black-ish and Louis C.K.’s homemade Horace and Pete are coming to Hulu, and upcoming original productions will include Future Man, a comedy starring Josh Hutcherson of The Hunger Games.

Oddly, the announcement by Erwich that resonated the most – eliciting an audible response from dozens of critics in the room – was that the classic sitcom The Golden Girls would be available on Hulu on February 13. It will mark the first time that the entire series has been available in one place for streaming.

Sessions for season two of the drama series The Path, the upcoming limited series National Treasure, the upcoming period drama with a modern sensibility Harlots, the third season of Casual, the current fourth season of Pivot transplant Please Like Me, the upcoming documentary Batman & Bill and the upcoming thriller series The Handmaid’s Tale followed.  Also, there was a Nashville-themed lunch in a ballroom decorated to resemble the Music City landmark The Bluebird Café (a familiar location in the series) and, before that, a performance by Clare Bowen, one of the stars of that show. (A note about Nashville, which just began its fifth season, now on CMT and Hulu: Out of the ashes of cancellation by ABC, this often silly and superficial soap opera, which was nevertheless beloved by millions if only as an over-the-top pleasure, has suddenly transmogrified into a show full of heart and soul, richer in character and atmosphere than it ever had been.)

The day concluded with a cocktail party at the hotel. Happily, and much like the DirecTV party two nights earlier, it was one of those parties in which a network’s or streamer’s talent was readily available and stayed to talk with interested reporters.

There wasn’t a dull panel throughout the day – I could write extensively about any of them here -- but if I had to choose highlights, they would be The Path, Harlots and Please Like Me. The Handmaid’s Tale was also memorable, especially considering the star power on the Hulu stage, which included Elisabeth Moss, Joseph Finnes, Alexis Bledel and Yvonne Strahovski, along with executive producer Warren Littlefield.

The session for The Path, a drama about a quasi-religious, cult-like movement, led to questions and commentary about the presidential campaign and election, which I suspect will come up repeatedly throughout the rest of TCA. (The tour ends two days before the inauguration of President-elect Donald Trump.)

“It certainly feels like, following this election, things have changed in America a little bit, at least how we view Americans in America,” one critic said to executive producer Jessica Goldberg (pictured at top with, left to right, series stars Hugh Dancy, Michelle Monaghan and Aaron Paul). “I feel like a lot of TV shows that were written before the election had a different impact when they aired after.  Are you anticipating that for this second season? What do you think that changed impact will be?”

“I was watching some of the episodes after the election, and there’s one [scene] where [a character is] saying, ‘We’ve got to protect this place. We have walls for a reason.’ I was like, ‘Wow!’" Goldberg replied. "I feel like [the show’s] relevance will not deteriorate.  It feels different right now, what you write, what you say. You have to really think a little deeper about what stories you’re telling. But I felt relieved looking back through the show that, to me, it felt very relevant somehow.

“A lot of these movements actually did start during the social revolution of the ’60s and ’70s, and it feels like something that might be starting to happen [again] in America,” she continued.  “I don’t know what’s going to happen. But I do feel like we're looking at what people do when they’re not feeling included in their country. I think our show deals with a lot of those questions, and I think we’re living in a country where faith is much more important than we all know about. Some of the questions that our show grapples with are relevant.”

“Going back to the first season,” added series star Hugh Dancy, who plays cult leader Cal Robertson, “there literally is a storyline in which Cal chooses to protect these refugees, these illegal immigrants, whatever you want to call them, and other people in the movement are saying, ‘No. Absolutely not! We’ve got to protect ourselves, and we’ve got to keep these gates shut.’  I don’t think that could be more relevant, sadly.”

“Following on that, the incoming administration appears to have a lot of people who want to blur the line between church and state,” another critic said. “When you’re writing Season 3, are you going to write into that skid or away from that skid because you don’t know how that will manifest?”

“If we’re lucky enough to write Season 3, who knows?” Goldberg mused. “Maybe Cal will have a spray tan!”

At the session for Please Like Me, a bittersweet comedy/drama about an average young gay man, series creator, writer and star Josh Thomas said, “I get quite nervous at TCAs because the first TCA I went to was the Pivot launch and you guys were, like, mean.  Right?” (He was right, though thinking back on it our negative reaction to what the Millennial-skewed Pivot was selling seems to have been justified.)

Thomas continued as the room erupted in laughter. “Someone would put up their hand, and they’d go, ‘Fuck you,’" Thomas recalled. "And then [Pivot chief] Evan Shapiro would be, like, ‘Well, I’m not sure if that’s the situation.’ That was a very difficult half hour.  It was me, two gang members, Joseph Gordon-Levitt and Meghan McCain.  And you guys were all just explaining why Pivot is a bad idea – which, congratulations, I guess.”

As the laughter increased, Thomas concluded, “At the time, I thought you were mean, and now I am sort of like, ‘Well, maybe we should listen to what these people have to say.’”

The plainly outspoken Thomas also had something to say about watching series via streamers, making a very obvious comment that was all the more remarkable because no showrunner had ever before said it at a TCA session.

“I don’t know about binge watching,” he admitted.  “I like people being able to watch it all together, but then someone will tweet me and they will be, like, ‘I watched all four seasons in two days!’  And then I’m, like, ‘Fuck!  It took me five years to fill those two days!”